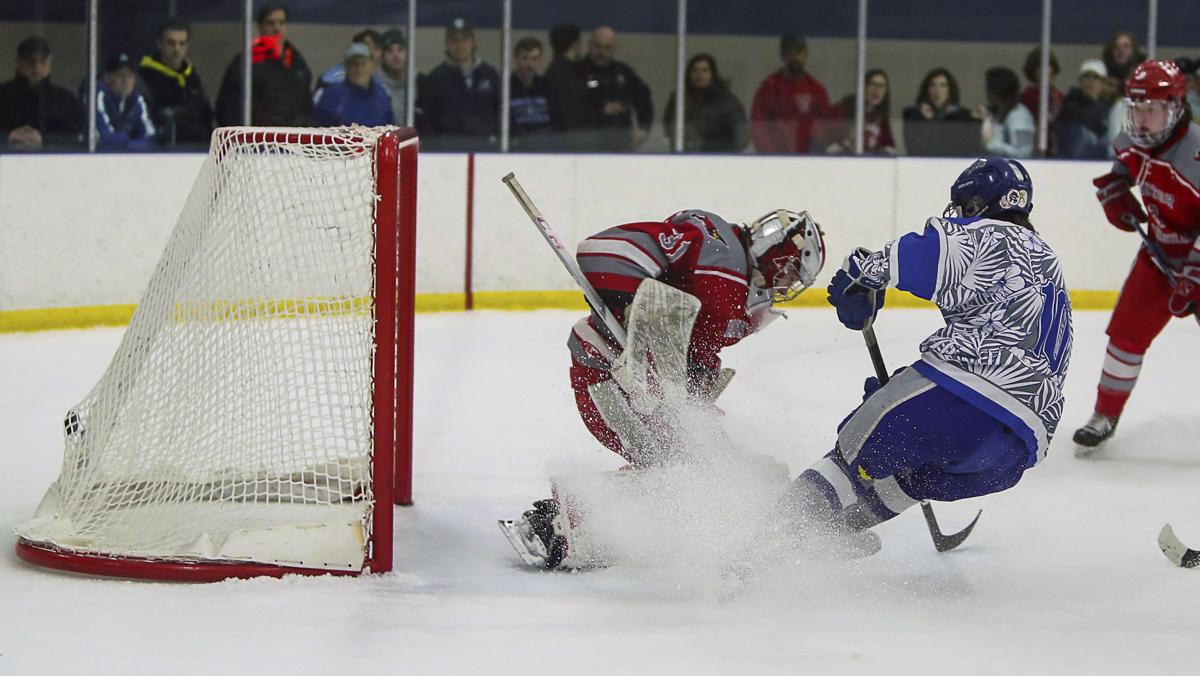 Gilmour Academy junior forward Charlie Tuggey buries the puck (back of the net) for a 2-1 lamplighter against Mentor senior goalie Alex Toth with 24 seconds left in the first period of the Ice Lancers’ district title win, 4-1, on Friday night in Kent. 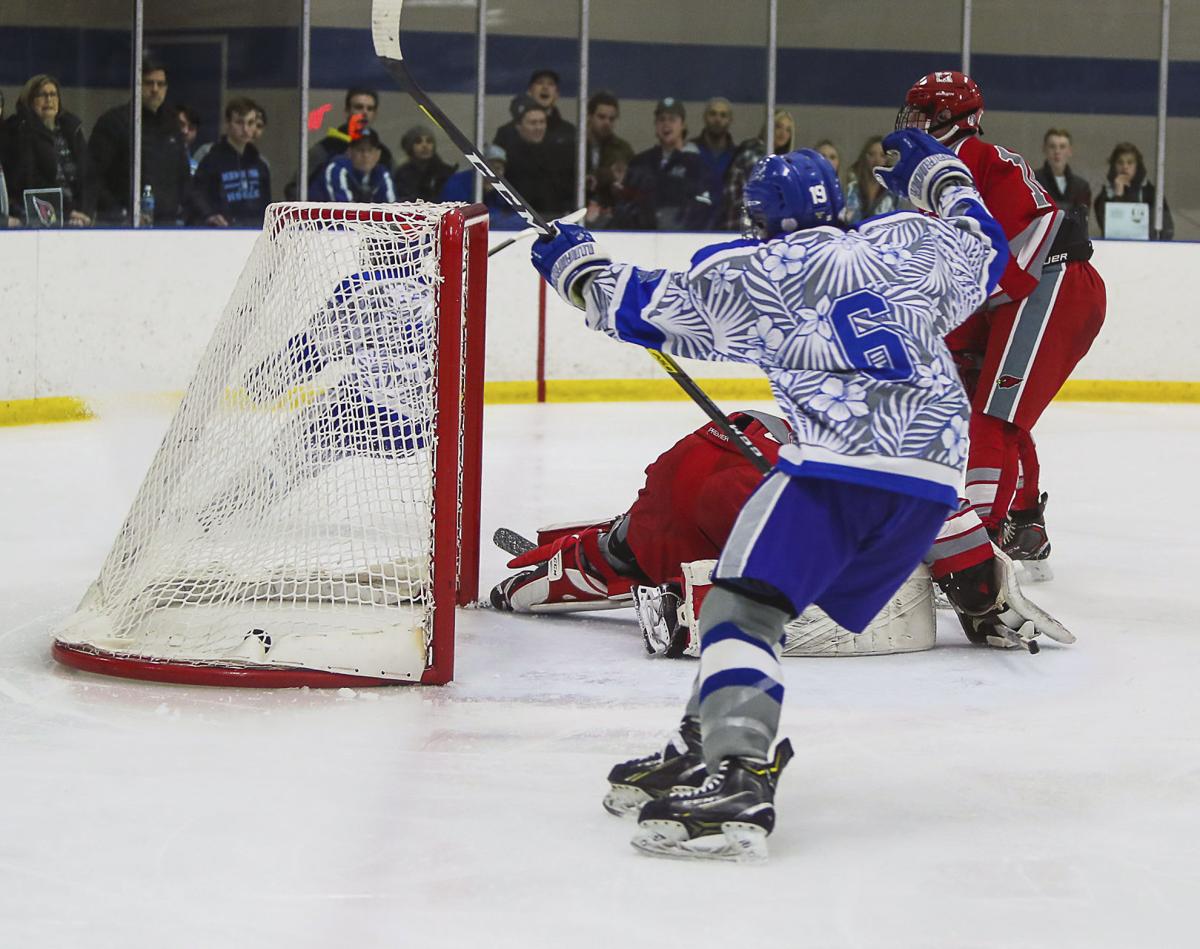 Gilmour Academy freshman Matthew Bauman (No. 6) celebrates his assist to junior cousin Colin Bauman for a 4-1 lamplighter in the third period of the Ice Lancers’ district title win against Mentor on Friday night in Kent.

Gilmour Academy junior forward Charlie Tuggey buries the puck (back of the net) for a 2-1 lamplighter against Mentor senior goalie Alex Toth with 24 seconds left in the first period of the Ice Lancers’ district title win, 4-1, on Friday night in Kent.

Gilmour Academy freshman Matthew Bauman (No. 6) celebrates his assist to junior cousin Colin Bauman for a 4-1 lamplighter in the third period of the Ice Lancers’ district title win against Mentor on Friday night in Kent.

The Gilmour Academy Icemen were putting a short-handed forecheck into effect like they had all season behind one of the most dominant penalty-kill units in Ohio.

But No. 2-seed Mentor (33-3-1) saw it coming during the district championship on Friday night at Kent State University Ice Arena.

Cardinal starting senior winger Luke Jeffery used his speed to get past the forecheck down the left alley and fed a golden apple into the lower slow for senior center Kyle Backston to hammer home a one-timer for a 1-0 lead with 8:10 remaining in the first period.

That was the first deficit district favorite Gilmour (30-7-1) faced in nearly six weeks, as the state No. 3-ranked Lancers were riding a 10-game win streak with hopes of punching their first ticket to the Frozen Four since 2011. Mentor was chasing its first state final-four berth.

“Our defense is good, and our goalies are top-notch,” Gilmour Academy 15th-year head coach John Malloy said before the game. “So, we just have to play disciplined – stay out of the box. I think that’ll be a key piece to it, is not let their power play work. Because any time you have a team like Mentor, that has five really good players or more, their power play is going to be good, and you just don’t want to give up too many of those chances.”

Gilmour junior netminder Toby Herlong entered the game with a 94.7 save percentage, but not even he could react quick enough against a point-blank missile from just outside the middle of the crease.

And while the Lancers’ defense has only allowed 1.5 goals per game this season, backboned by senior captain Tony Iacobell and senior Jake Howse, Iacobell was in the penalty box during the Mentor power play for cross-checking a screening Jeffery into the cage during a Cardinal attack.

But if Gilmour was going to come back and take a 2-1 advantage before the end of the frame and go on to claim the district trophy, 4-1, the Lancers would need Iacobell to step up at both ends of the sheet for the remainder of the night – he did.

Behind a transition play by Iacobell, Gilmour junior center Joe Roddy assisted junior wingman Frankie Valenti for the 1-1 equalizer with 2:15 to go in the opening frame.

“Tony Iacobell dumped it in, and Joe was the first one there,” Valenti said. “I yelled for it, he made a behind-the-back pass, and then I went around the guy, had a tight opening, and I hit it. So, yeah, it was awesome. We needed to build some confidence and momentum, and that’s exactly what it did.”

Roddy and Valenti, who also started on a line with junior winger Charlie Tuggey, answered again on their next shift.

Iacobell redialed Roddy on a stretch pass, Roddy broke some ankles with his fancy footwork to draw an extra defender between the circles and then left a fat one on the left side for Tuggey to pick up with a free lane to cage to finish off a 2-1 lamplighter against Mentor senior goalie Alex Toth with 24 seconds left in the opening stanza.

“I just tried to draw as many guys on me as I could,” Roddy said. “I was happy to see that it worked. I tried to just get it out to Charlie, and he finished it for us. It was awesome to step up when the team needed us.”

That Roddy-Tuggey-Valenti line wasn’t finished producing for the Lancers amidst the absence of senior alternate captain Justin Evans, who leads Gilmour in both goals, 30, and assists, 28, this season.

Coach Malloy said that Evans’ return is to be determined for the Lancers’ state semifinal game against state No. 1-ranked and four-time defending champion St. Ignatius (30-3-2) at noon Saturday at Nationwide Arena in Columbus.

After overcoming that early deficit and taking a 2-1 upper hand at the first intermission, Gilmour took further control over Mentor with a 17-4 advantage in shots on goal, as well as dominant physical play in the second frame.

While the Cardinals were mainly running two offensive shifts, compared to three lines for Gilmour, coach Malloy pulled some double shifts from his top unit to match up with Mentor’s best players, he said.

“We’re pretty balanced,” Malloy said of his three lines. “But, today, with Justin Evans out, our leading scorer, we had to have the ‘Gray Line’ step up, and that’s the Tuggey-Valenti-and-Roddy line. We knew they had to step up. You know, without Justin, you lose all those goals and all those assists, we told them, ‘You guys have to step up.’”

With 8:29 to go in the middle frame, Mentor was called for hooking.

A minute into the ensuing power play, Gilmour’s Tuggey was wide right on the goal line and sent the rubber into the crease with Roddy on the near post. The puck got through to the back door, where Valenti took three or four swipes before eventually hitting it home for the 3-1 upper hand.

“We were just trying to get pucks to the net on the PP,” Valenti said. “I just kept whacking at it, and it eventually went in. It was good. We knew we needed to get the next goal. It was a big goal. And we were confident, but we knew we had to play defense.”

Gilmour’s forechecking and defensive effort led to a 38-14 advantage in shots on goal by the end of the night, including a penalty kill late in the third period.

Earlier in the final stanza, Gilmour freshman forward Matthew Bauman poked the puck away from a Cardinal defenseman stepping up at the point and broke loose on a two-on-one rush the other way.

Once Bauman got Mentor’s other defenseman to commit, he set up a golden assist to elder cousin Colin Bauman to hammer home a backdoor lamplighter against Toth’s stick-side for a 4-1 lead with 7:29 to play, which held up for the final.

The younger Bauman was called up to varsity from the 16-and-under Gilmour squad two games before the playoffs started, while the elder Bauman had just been called up for the playoffs. They were paired on a line with junior Luke Robertson – the Lancers’ second leading point-getter.

“We would like to play players where they are best suited and they’re going to develop,” Malloy said about the late-season call-ups of the Baumans. “When you bring up guys too soon, they can’t do certain things yet. And, by the end of the year, we get to see who emerges. And that’s what happened with these guys.”

The Ice Lancers’ success this year comes just three short seasons after a dismal 4-31 record with a first-round playoff loss during their 2016-17 campaign. Current senior Bryce Hofstrom was the lone freshman on that varsity team

Following Gilmour’s 4-1 district title win against Mentor on Friday, Malloy said he called upon Hofstrom, now a team captain, to share a few words in the locker room.

“Since I’m the only one who’s been here since a freshman, I knew what it was like when we were not good at all,” Hofstrom said. “So, I started off by saying I’ve been here through thick and thin and it feels really good to end off this season on a really good note with a trip to Columbus.

“We’ve never reached this point. We’ve always been cut short. As senior and almost about to end my hockey career, it’s awesome to be in these championships. I never would have thought of this as a freshman.”