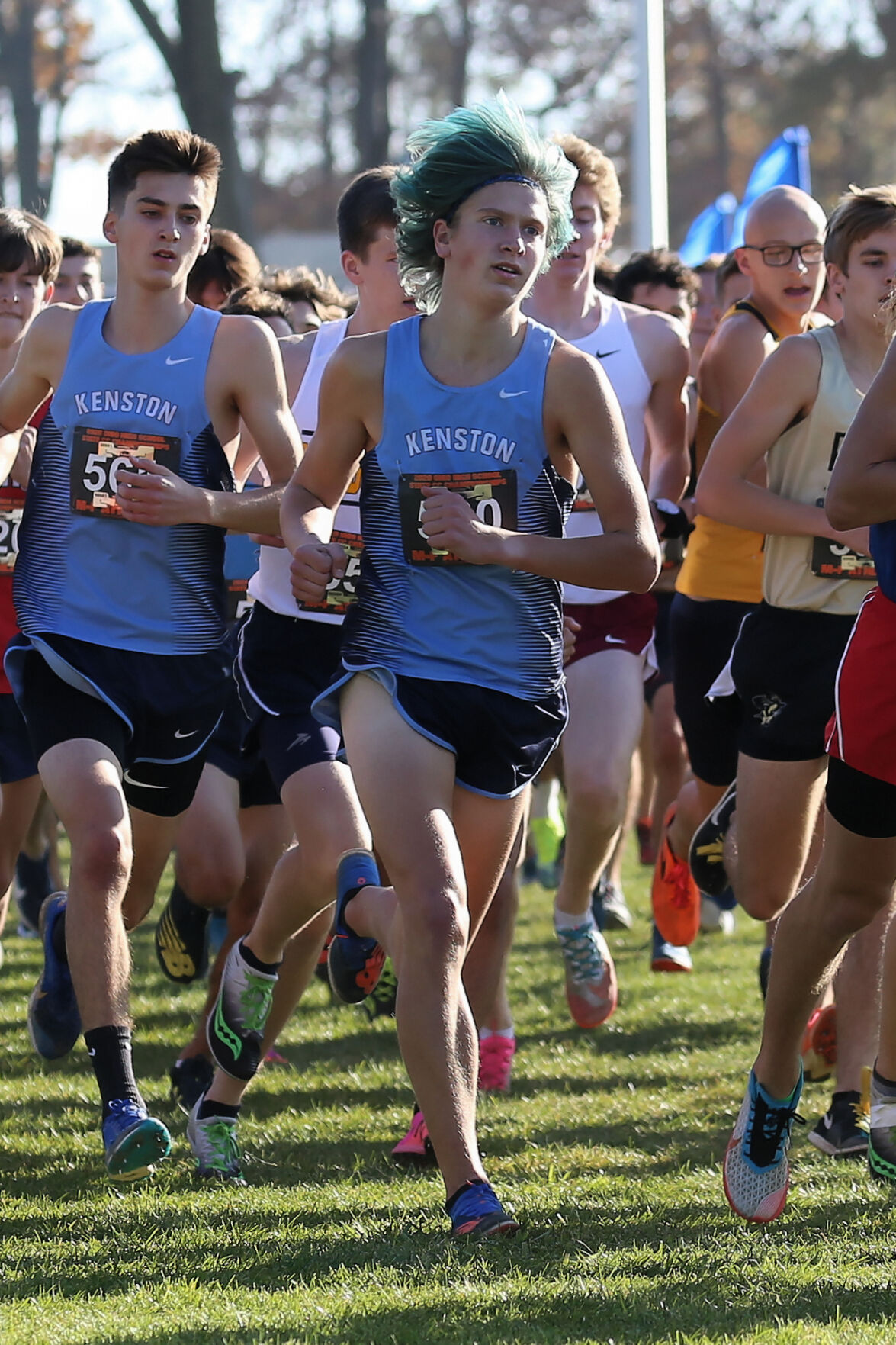 Kenston seniors Dennis Princic (center) and Jack Turk steer to open space on the outside of a packed Division I state cross-country field on Saturday at Fortress Obetz. 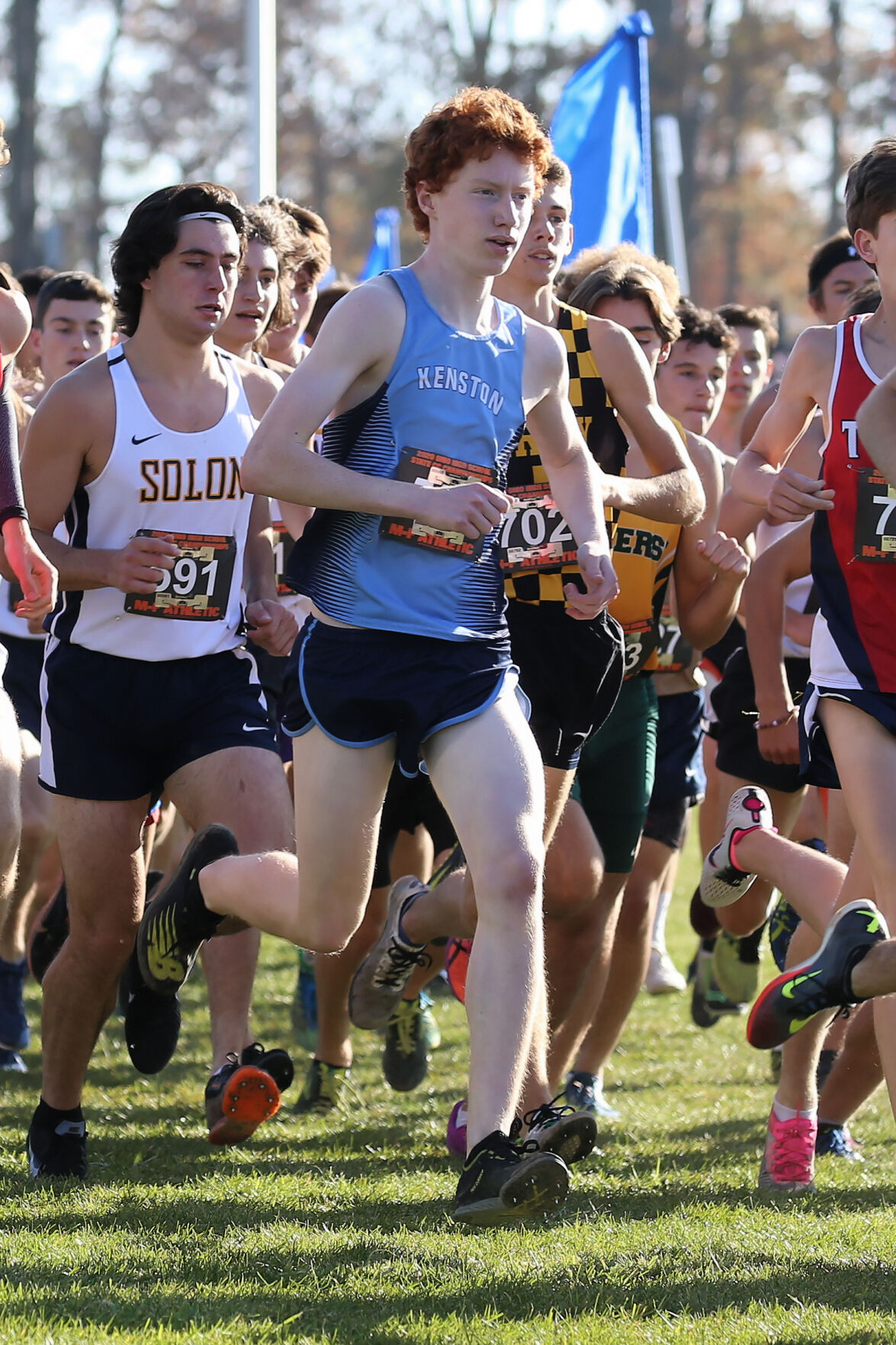 Kenston senior one man Nathan Bertman (center) and Solon senior one man Johnny Ciccero (left) work their pace in traffic during the Division I state cross-country meet on Saturday at Fortress Obetz.

Kenston seniors Dennis Princic (center) and Jack Turk steer to open space on the outside of a packed Division I state cross-country field on Saturday at Fortress Obetz.

Kenston senior one man Nathan Bertman (center) and Solon senior one man Johnny Ciccero (left) work their pace in traffic during the Division I state cross-country meet on Saturday at Fortress Obetz.

For the second straight season, the Kenston boys cross-country team relied on its pack to compete among the top giants at the Division I state meet on Saturday at Fortress Obetz, just south of Columbus.

For the second straight season, the Bombers harrier outperformed what opposing coaches expected of them in the pre-season poll.

And for the second straight season, the Kenston runners left everything they had out on the 5-kilometer course during the final race of the season.

Yet repeating what they thought was a sixth-place finish as a team left them a little dissatisfied, Kenston 14th-year head coach Chris Ickes said.

“And sure enough, they had missed Jack Turk in the standings. So, a few seconds later, the standings refreshed. And when we went from sixth to fifth, which is a podium finish, they were ecstatic, and they jumped up and down. It was such pure emotion to see how happy they were for each other.”

A three-time state scorer for the Bombers, senior Jack Turk clocked a 16:33 to finish 35th in the team race as Kenston’s three man on Saturday.

When Turk’s performance was finally figured into the final standings, the Bombers moved up to fifth for their best Division I team showing as a program – it was their fifth consecutive year competing at the big-school state meet.

“It was a strong, competitive atmosphere, and all the other teams wanted it just as bad as we did,” said Kenston senior Nathan Bertman, who was the Bombers’ frontrunner in 16:12.7 to finish 20th in the team race and 34th overall among 177 runners in the field.

“We prepared really, really well,” he said. “We felt we had a pretty good shot (to win), but pieces didn’t fall together this year. But everybody did the best they could, everybody had the best race they could. So, I think, as along as we could say that, we’re happy, and we’re proud of what we did this season.”

In the pre-state coaches poll, the Kenston boys were favored to finish eighth overall, but they outperformed the likes of Hilliard Davidson, Hudson and Mason to take fifth thanks to 31.8-second gap between their one and five runners – the tightest pack in the 20-team field.

“Our guys were feeding off each other throughout the race,” Ickes said. “We’re Division I, and we’re a third of the size of these other schools we’re against. For us to ever compete, it’s going to be to have the tightest pack we possibly can have.

“And other people look at this sport as an individual sport and who won the race as a top boy. We’ve never considered it that way. We’ve always considered it a team, from seven, eight, nine, 10 people deep – every single one of them matters.”

Kenston was the only team in the top eight that didn’t yield an all-Ohio runner, but that pack culture that Ickes has instilled in his program continues to allow the Bombers to take on anyone year after year.

Bertman, who shed nearly seven minutes off his time from his freshman season, finished his career just four places, or two seconds, shy of a top-30 all-state finish – he’s the very definition of what consistency and hard work can achieve.

“It felt like it came full circle,” Bertman said. “I worked four years straight, 200 weeks out of 208, and I just put in the work, I followed my coach’s program, I made sure I did everything right, and it finally paid off. It feels amazing.”

The previous week’s Boardman regional was the first time Bertman was Kenston’s one runner in his career, and he proved it wasn’t a fluke by leading the Bombers yet again at the big dance.

Not to mention, Bertman passed 35 runners from the mile mark to the finish line on Saturday at Fortress Obetz.

“He went from the slowest freshman on the team to the No. 1 runner in the last two races of his career,” Ickes said. “He was four places out of all-Ohio. You can’t write a better story about hard work and consistency. He put in the work, so we knew when we got to the postseason and began our taper that his taper would be a big taper.”

While Turk, McConnell and McMahan ran in three state meets for Kenston and Princic and Bertman ran in two state meets, Hunt – the Bombers’ lone non-senior in the postseason lineup – made quite the impression during his big-dance debut.

The junior harrier was Kenston’s four man at states, after he was the Bombers’ seventh runner during districts and regionals. He brought it home by passing 21 runners in the final third of the state race on Saturday.

“Braden told the team, ‘That was a fluke.’ He knew he could change his mental approach, and he made some big improvements. He absolutely crushed the second half of the race. For him to be our fourth man speaks a lot about the trust the team has in him and also his resolve to perform his best for his brothers.”

Not to be forgotten, there were 10 Division I programs to have teams represented in both the boys and girls state races. But Kenston was the only Division I program with both teams to finish fifth or better, as the Lady Bombers also took home fifth.

“What I really think stands out the most is the way the team came together, boys and girls, these past two weeks,” Ickes said. “They did such a good job of complementing each other, building each other up, putting aside any past differences and really gelling as a team.