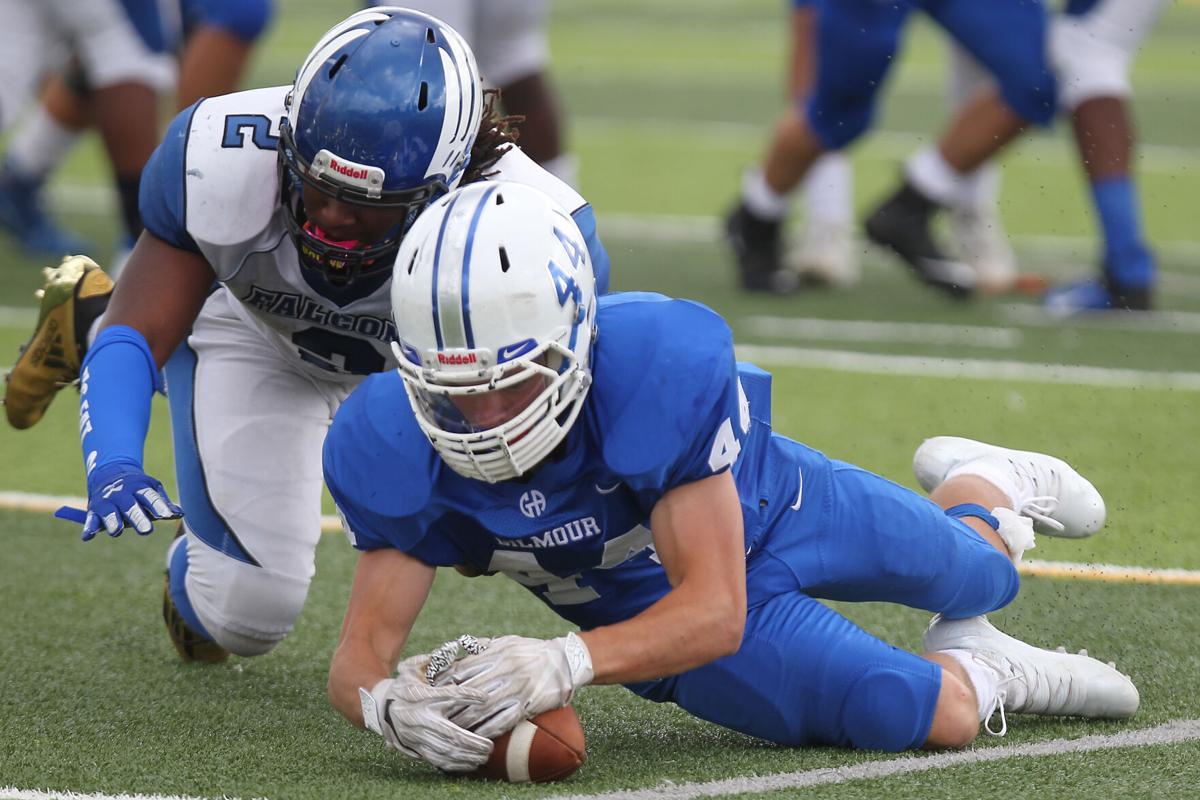 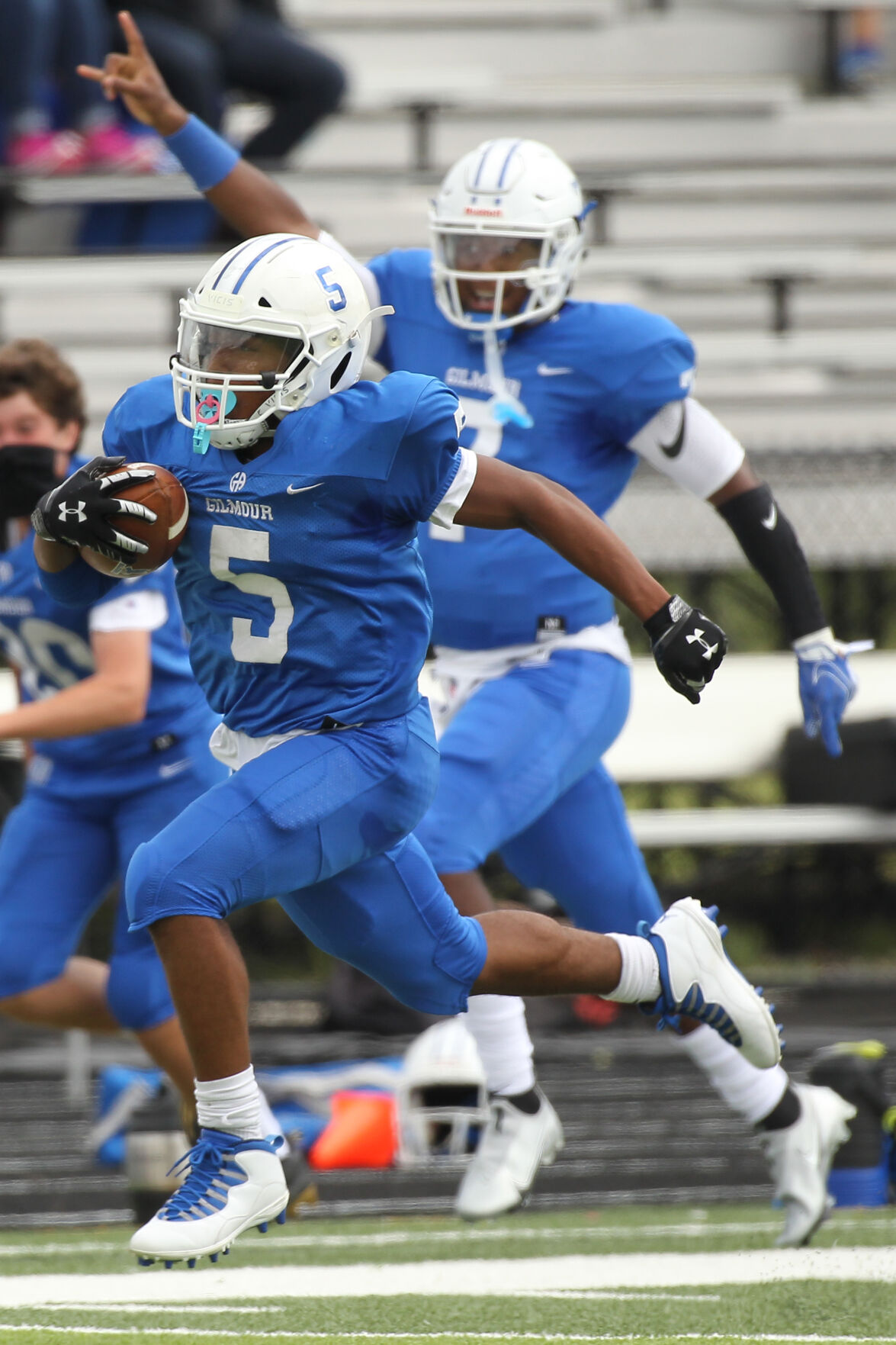 Gilmour Academy 180-pound sophomore running back Santino Harpo breaks free for the end zone during a 63-yard interception return with junior defensive back Thomas Richardson cheering him on.

Gilmour Academy 180-pound sophomore running back Santino Harpo breaks free for the end zone during a 63-yard interception return with junior defensive back Thomas Richardson cheering him on.

After a halt in scoring during the third quarter, Gilmour Academy football felt the pressure in a season opener against Lutheran East on Saturday afternoon at the Lancers’ Weber Stadium in Gates Mills.

The Gilmour boys had an extra point blocked and came up short on a two-point conversion attempt in the first half and needed to get their offense rolling again after the third-quarter slumber.

The alarm went off for the Lancers, who went on to score 20 points down the stretch for a 39-20 victory.

“It was a hard-hitting game, and Lutheran East was a dangerous team coming off a playoff season,” Gilmour sixth-year head coach Chris Kosiorek said. “So, it was great to see our guys step up and compete. It’s not like we didn’t deserve to win, but it was something that you always come into an opening game not sure how things are going to happen.”

Gilmour’s offense was ignited for the 2020 opener by 6-foot-2 junior quarterback Thomas Richardson’s 16 carries for 111 yards and 180-pound sophomore running back Santino Harper’s 15 carries for 148 yards, as well as two catches for 21 yards. Both are returning starters.

Not to mention, Lancer 6-foot-3 sophomore Charlie Snelling converted a fake punt on fourth-and-three during Gilmour’s first offensive series, opening the door for Richardson to split Lutheran East’s left defensive end and tackle for a 48-yard touchdown run and a 7-0 upper hand with 7:18 to go in the first quarter.

“He’s put on a solid 15 pounds of muscle. I think he’s up to about 205 now,” Kosiorek said of Richardson running through contact. “So, he’s one of our stronger kids, and it helps when you have a quarterback that’s going to be able to do that – a dual-threat to put some stress on the defenses.”

Lutheran East answered on a 2-yard touchdown run by junior back Rayshon Kennedy to tie the game with 5:29 left in the half.

Then Gilmour’s Harper struck twice before intermission, first on an 18-yard rush with 1:48 to go and then a 63-yard interception return to the house with 11 seconds remaining for the Lancers’ 19-7 lead at the break. Harper finished with two picks for the game.

“(Harper) didn’t come off the field at all pretty much the whole game, between offense, defense and returning,” Kosiorek said. “To have the pick-six that he had, that was a big, big swing. And his rushes, he was running hard, and our offensive line was doing an outstanding job.”

Gilmour caused two more turnovers in the game, including a pick by 6-foot-4 sophomore Will Lazzaro to end the half and a fumble recovery in the fourth quarter.

“They got some momentum,” Kosiorek said. “You could tell that things were possibly going to change. But it was great to see our guys respond the way they did.”

The response came in the form of Richardson dialing up 6-foot-3 senior receiver Michael Snelling on a 36-yard touchdown strike – the duo connected again on a two-point conversion – to put the Lancers up, 27-14, with 9:19 to play.

Gilmour 165-pound senior linebacker Mitch Lamosek then came up with a fumble recovery to provide a short field, and the Lancers took advantage of it with Richardson’s 5-yard keeper to the end zone for a 33-14 command with 8:01 to play.

The Falcon’s answered on a 59-yard touchdown pass from Mattocks to senior receiver Thomas Pondexter for a 33-20 score just 19 seconds later, but Gilmour’s Richardson put the finishing touches on a 39-20 victory by punching in a 1-yard sneak with 5:39 to play.

“There were a lot of guys who contributed in the overall win,” Kosiorek said. “Defensively, there were a lot of great things from our line. And our offensive line of Hunter Sebulsky, Tim Sargi, CJ Johnson, Louka Babic, Will Lazzaro, Charlie Shepherd, Joe Rottinghaus – those guys did a great job stepping up and providing that rushing attack.”

The Lancers only ran 40 offensive plays in the victory.

The University School gridders got a sour taste to open their season during a 46-13 road loss against Division VI playoff perennial Mogadore on Saturday night in Summit County.

The game was originally scheduled to be played Friday evening at the Preppers’ home gridiron in Hunting Valley, but weather conditions postponed the competition with a new site.

The host Wildcats took a 21-0 lead into intermission with 5- and 2-yard touchdown runs by 210-pound junior running back Tyler Knight and a 3-yard end-zone find by 6-foot-1 sophomore quarterback Will Butler.

Mogadore went on to score four straight touchdowns in the third frame, including an 85-yard kickoff return to the house by 6-foot-1 senior Tucker Marmash for a 27-6 upper hand in response to the Preppers’ score.

University School freshman quarterback Jackson Boland then scored on a 1-yard keeper with 5:40 to play for the 46-13 final.