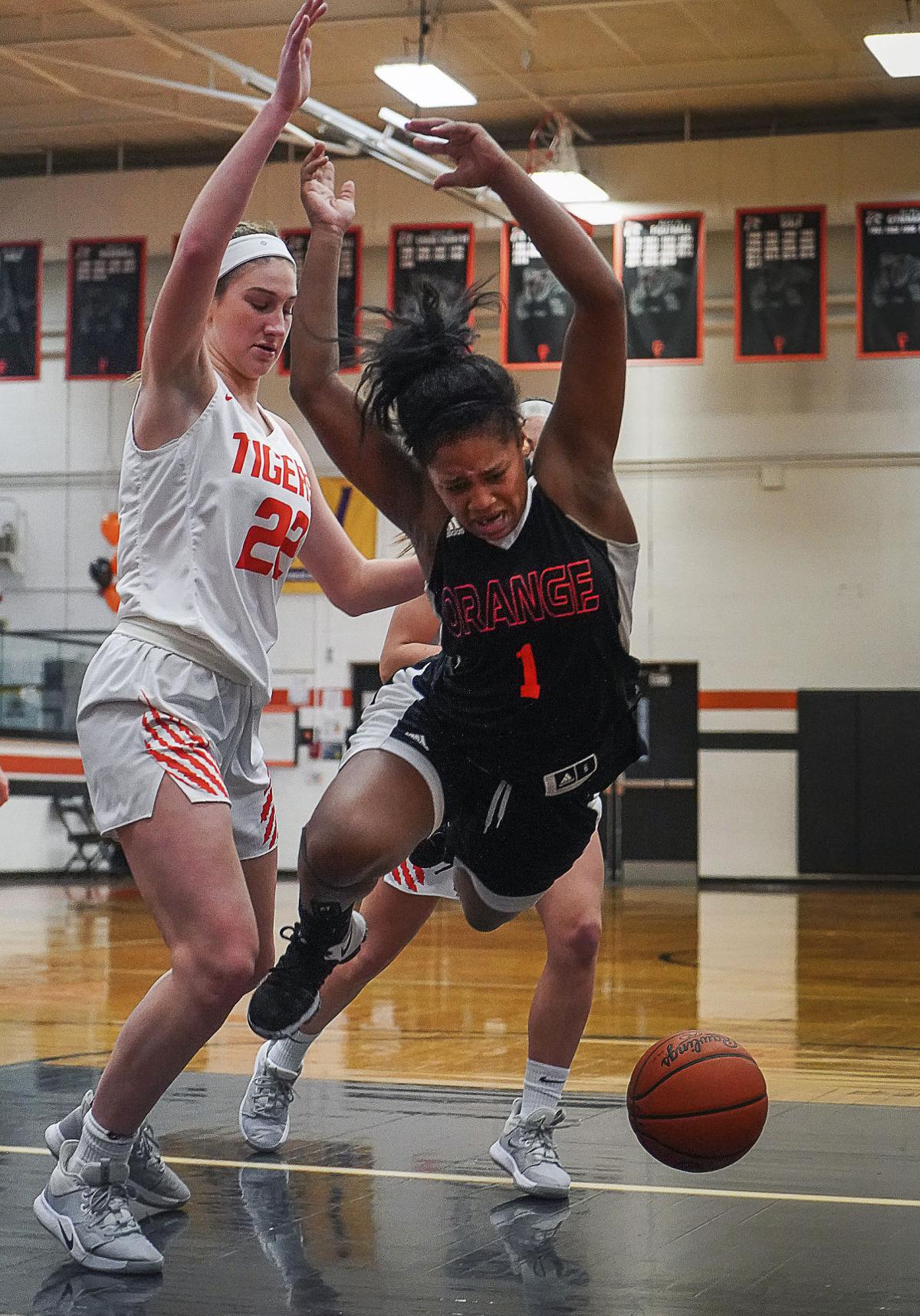 Orange senior Mahogany Sanford (No. 1) goes flying after getting tripped up by the defense of Chagrin Falls senior Katie Kwasny (left) during a home win for the Lady Tigers on Saturday afternoon at Quesinberry Gymnasium. 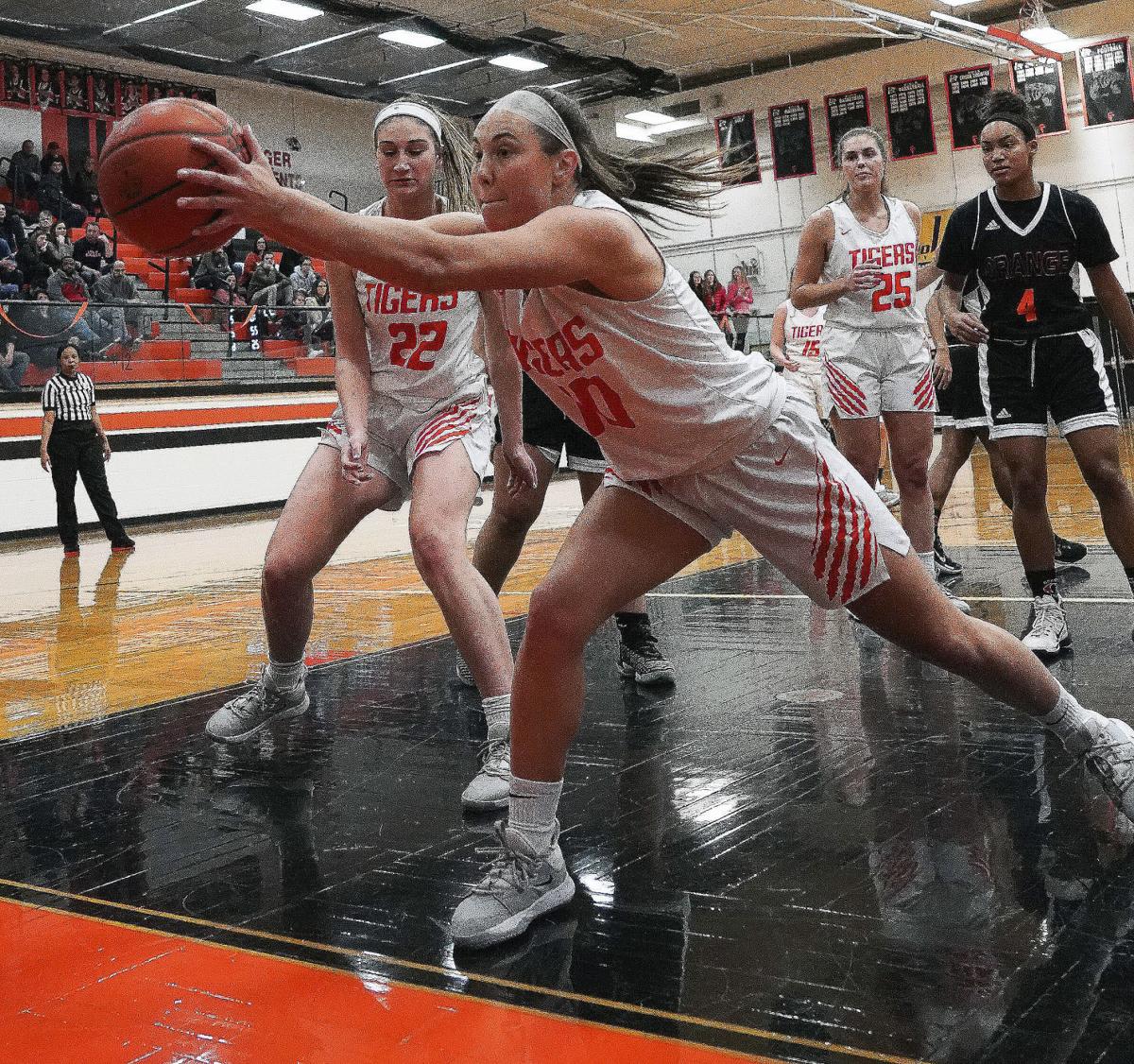 Chagrin sophomore Peyton Gellin goes Inspector Gadget to save a possession from going out of bounds during the Lady Tigers’ win against Orange. 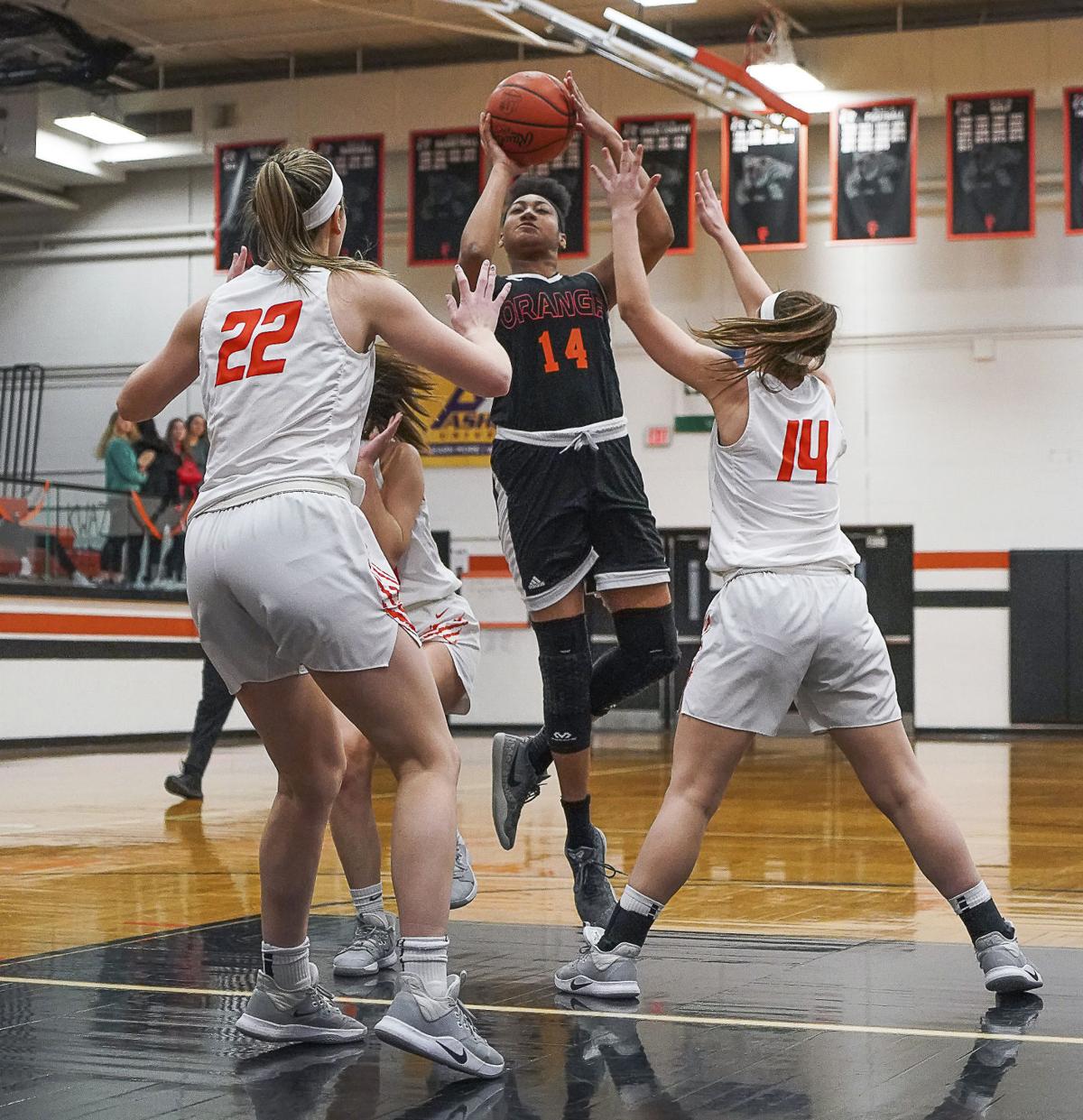 Orange senior Kaydan Lawson pulls up for a jumper as she’s collapsed on in the key by Chagrin Falls senior Carolyn Bencko (right) and Katie Kwasny.

Orange senior Mahogany Sanford (No. 1) goes flying after getting tripped up by the defense of Chagrin Falls senior Katie Kwasny (left) during a home win for the Lady Tigers on Saturday afternoon at Quesinberry Gymnasium.

Chagrin sophomore Peyton Gellin goes Inspector Gadget to save a possession from going out of bounds during the Lady Tigers’ win against Orange.

Orange senior Kaydan Lawson pulls up for a jumper as she’s collapsed on in the key by Chagrin Falls senior Carolyn Bencko (right) and Katie Kwasny.

Coming off its lowest-scoring quarter of the season, the Chagrin Falls girls faced a 20-14 halftime deficit during a home clash against league rival Orange on Saturday afternoon at Quesinberry Gymnasium.

The Lady Tigers (13-6, 9-3) could not get their outside looks to drop, and they were struggling against the interior length and athleticism of Orange 5-foot-11 senior Kaydan Lawson, the reigning MVP of the Chagrin Valley Conference.

Chagrin Falls senior sharpshooters Carolyn Bencko and Bella Dalessandro would eventually get their 3-pointers rolling, but there was a lid on the basket in that second period as the Lady Tigers scored just three points in eight minutes and trailed by six at intermission.

“We had a rough first half,” said Chagrin Falls 10th-year head coach Brittany Anderson, who was on the brink of picking up her 150th win at the helm.

“We couldn’t quite get into rhythm,” Anderson said. “We had one really good run in the first quarter, but a lot of looks on offense just weren’t dropping. And then defensively we were struggling a bit to get stops in transition.”

The Lady Tigers turned the tables out of the break and held Orange (7-11, 5-6) to its lowest scoring quarter of the season during a 16-2 run to take command of a 30-22 lead. Chagrin Falls then kept the offensive pedal to the metal in the fourth for a 48-34 victory.

“We changed our defensive scheme at halftime just to kind of keep them on their toes,” Anderson said of Saturday’s game against Orange. “And then when Kaydan Lawson was out of the game, we changed to a man defense to pick up the intensity and pressure and put more pressure on them to score without the basketball in her hands.

“Prior to that, Peyton Gellin took two charges in the game that were huge. So, she was really willing to put her body on the line to make a sacrifice and get some momentum going our way and stop them from driving to the rim.”

A 5-foot-5 sophomore, Gellin tallied four points, four boards and a steal for the Lady Tigers.

But to hold Lawson, a University of Virginia signee, to 11 points, after she scored 26 points in a previous meeting that went in Chagrin’s favor, 52-48, on Jan. 10, the Lady Tigers needed to switch up their look.

“We went with a two-three zone so that we’d have Katie Kwasny, who’s our shot blocker, in the middle and hopefully have better coverage on the perimeter,” Anderson said. “So, that’s different for us, because normally it’s a single-guard front with Bella Dalessandro creating a lot of pressure up top. But we just needed better coverage on the wing and on the perimeter and have somebody central in the middle of the paint, because previously, like in the first half, we didn’t have that.”

Chagrin’s Kwasny, a 5-foot-11 senior, held down the zone fort to propel Chagrin on that 16-2 run in the third quarter, but she found herself in foul trouble. She finished with two points, two boards, two assists and a block, before fouling out.

The Lady Tigers also did enough to slow down Orange senior Mahogany Sanford to 14 points. Another top scoring threat for the Lady Lions, Sanford has posted multiple 20-plus-point games this season.

“We knew going into the game that we were going to have to keep the ball out of Lawson’s hands and keep it out of Sanford’s hand,” Anderson said. “They really weren’t giving the ball up at all, so forcing turnovers really wasn’t an option for us at that point, and it was more so prevent them from getting a good look. And, so, changing that mentality for second half really helped us out.”

“Orange played a two-three zone,” Anderson said. “Sometimes Lawson was on the wing of that, and sometimes she was in the middle. And, when they moved her to the middle, that caused some problems for us. I mean, she’s a tall player. She’s a shot blocker. So, that creates some issues.

“We were trying to draw some fouls as we drove in, and that really wasn’t happening. So, we had to have better ball movement in the second half so we could get some outside shot opportunities instead of looking to drive.”

Kwasny and Santamaria lead the glass cleaning efforts for the Lady Tigers this season, but Karyo has no problem getting her hands dirty like she did to lead her team on the boards against Orange, Anderson said.

“When Kwasy was in foul trouble, somebody else has to step up, even if they’re undersized in that role, and Lily (Karyo) did a really good job of that,” the coach said. “She doesn’t play with the mentality of, ‘Oh, I’m a guard.’ She plays with the mentality of, ‘I have a job to do, and I’m going to get it done.’ She did that for us against Orange. She really pulled through, and she had three buckets at key times.”

On Monday, Chagrin Falls went on to defeat league foe Ashtabula Edgewood, 56-22, behind a 24-point scoring effort from Dalessandro, who finished nine-of-13 from the field to become the eighth player in program history to reach 1,000 career points.

In the 13-team Division II Nordonia District, Chagrin Falls earned the No. 8 seed and will open the postseason against No. 9-seed Garfield Heights Trinity at 1 p.m. Feb. 15 at Quesinberry Gymnasium.