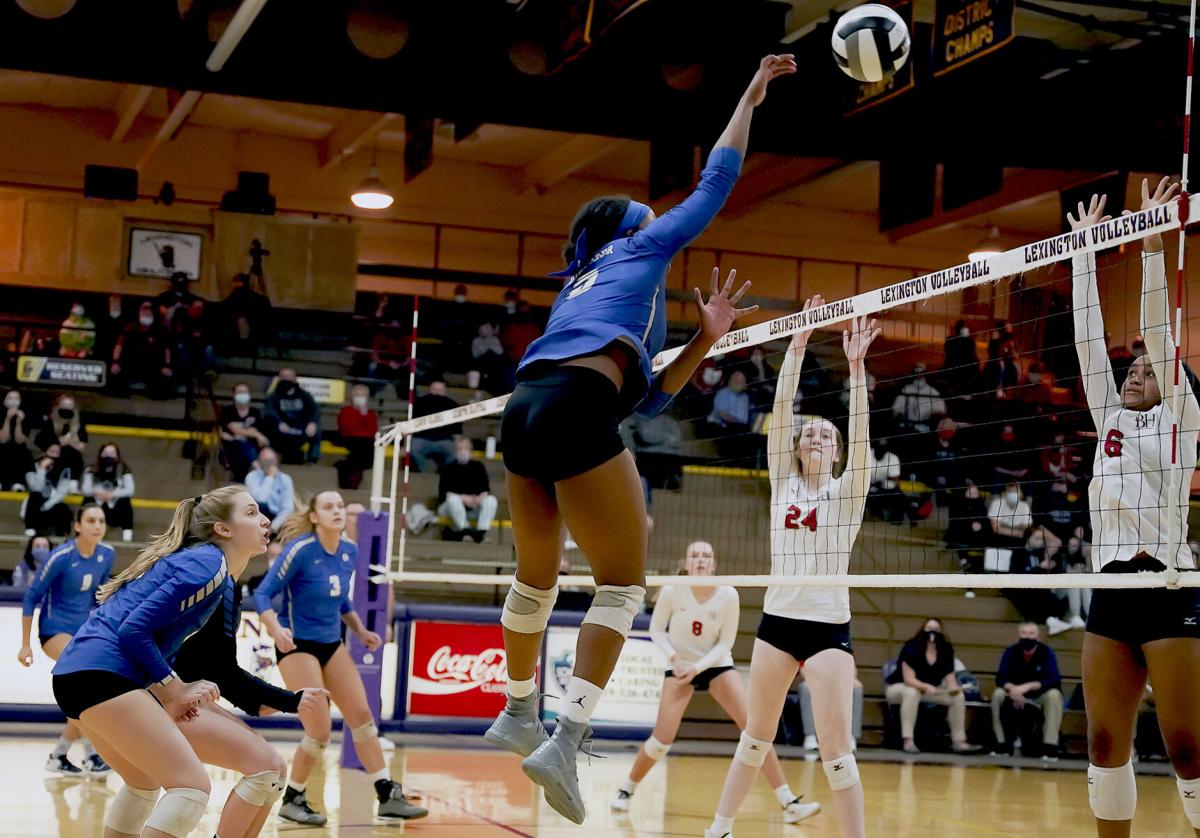 Gilmour Academy 5-foot-10 senior opposite hitter Jocelyn Carter plays above the net during her 16-kill performance in the Lady Lancers’ 3-2 victory against Columbus Bishop Hartley in the Division II regional semis last Thursday. 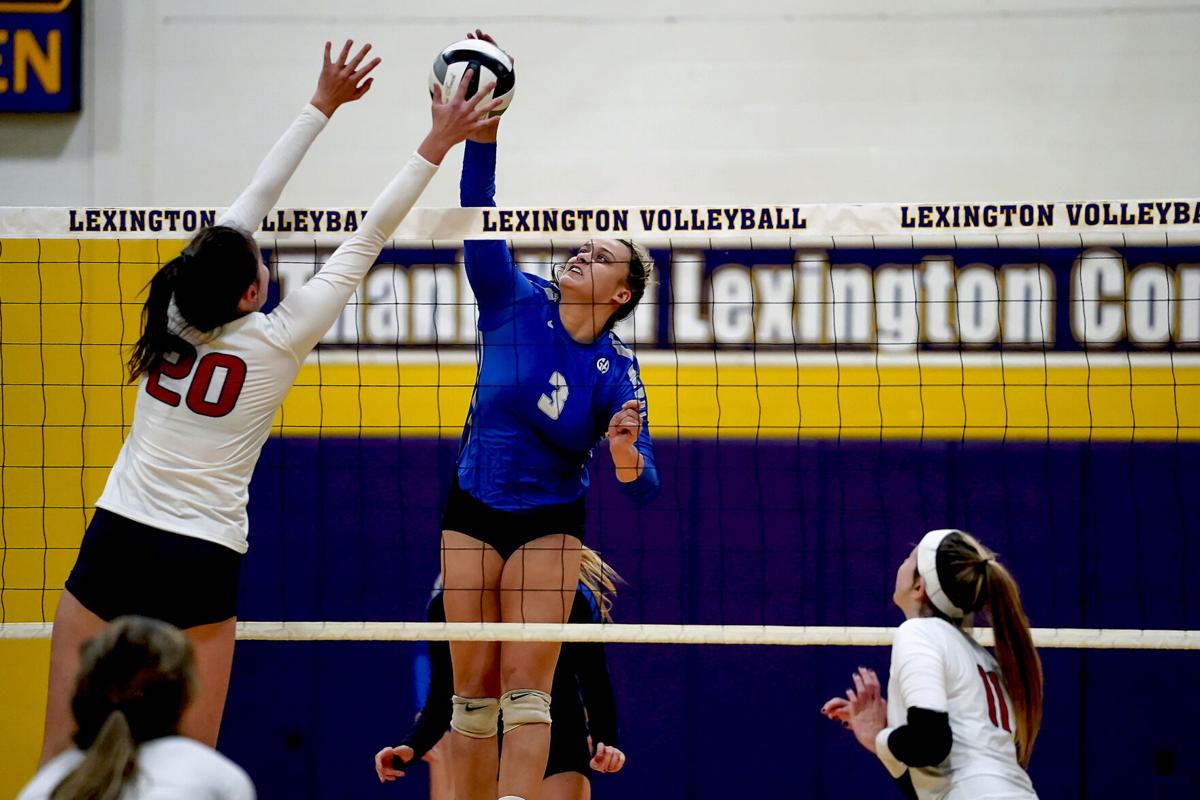 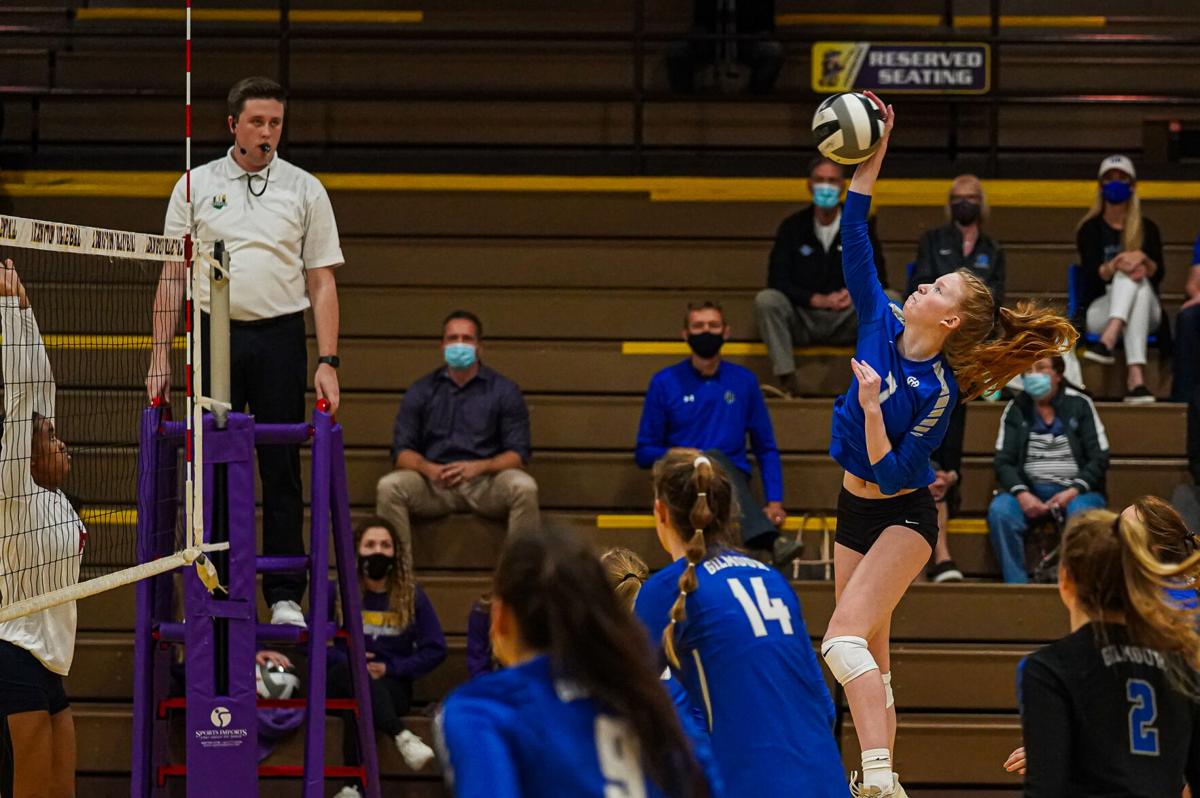 Gilmour Academy 5-foot-10 senior opposite hitter Jocelyn Carter plays above the net during her 16-kill performance in the Lady Lancers’ 3-2 victory against Columbus Bishop Hartley in the Division II regional semis last Thursday.

In their semifinal game, the Lady Lancers faced a five-set match for the first time this campaign, going down, 2-1, against state No. 3-ranked Columbus Bishop Hartley (15-3), before they dominated the fourth, 25-15, and fifth 15-8, frames.

Gilmour 6-foot-1 junior middle Kathryn Randorf, 17 kills and five blocks, and 5-foot-10 senior opposite Jocelyn Carter, 16 kills and eight blocks, had to lay the hammer down at the net, while 5-foot-8 senior libero and first-team all-Ohioan Emmy Klika came up with 32 digs to escape with the 3-2 victory.

“That was a big, emotional game,” Gilmour sixth-year head coach Danny Coughlin said. “So, I kind of talked to the girls about being cautious that we didn’t waste all of our energy in the semifinal game, when we still have to perform in our final game to get to our ultimate goal.

“So, it was really important that we didn’t have that letdown of emotions going into (the regional championship).”

After getting over that five-set hump last Thursday, the Gilmour girls returned on Saturday to defend their regional title, 25-21, 25-5, 25-13, against state No. 15-ranked Sandusky Perkins (24-3), according to the coaches poll.

Among four Division II regional finals throughout Ohio, that was the only 3-0 sweep, and it featured a 25-5 middle frame – the most dominant stanza across 48 regional semifinals and finals in four divisions.

Before getting to that middle frame, the Lady Lancers opened the match with an 8-2 lead, thanks to a five-point service run by 6-foot sophomore Anna Rarick that included three straight aces. Scrambling with substitutions to find the correct serve receive, Perkins head coach Heath Hamilton was forced to burn a timeout.

Getting going in big games is always a point of emphasis, Coughlin said.

“The first sets are normally a little bit slower, because it takes us time to get used to the pace of the other team, the speed of the balls that they hit and how they run their offense,” he said. “It usually takes us a little bit of time, but we did a nice job jumping on them in the beginning, so I think that helped our momentum.”

That early momentum came with second-team all-Ohioan Randorf, a six-rotation spiker, patiently playing out the back row. She wouldn’t put down her first kill until three more side-outs, but the middle hitter went on to record a set-high six kills with one block in that opening frame.

The lady Lancers’ largest lead in that set came after Randorf scored her fourth kill on a back-row approach to put her team up, 17-8.

“I think it was just really important for us to just focus on ourselves and focus on our speed, because I feel like, when we’re going quick all the time, it’s hard for teams to keep up with us,” Randorf said. “So, I think, going in there, we just wanted to do our game, play what we know best and just work together as a team with as much energy as possible.”

Nonetheless, Gilmour didn’t have its cleanest game with 12 miscues in that first set, including five hitting errors, three service errors, three violations and one receiving error, which allowed the Perkins Lady Pirates to inch back into it and close their deficit, 22-19.

That’s when coach Coughlin called his only timeout of the entire match to talk about being more efficient with the ball on the Lady Lancers’ side of the net and to quit worrying about what Perkins was doing on the other side.

Out of the powwow, Gilmour 5-foot-11 senior middle Brinn MacLellan, an honorable mention all-Ohioan, stepped up for a block to give her team a 23-19 lead that helped close out the frame, 25-21.

“That was definitely important,” MacLellan said. “We weren’t really happy with the way we let them come back in there, because we know we could have done better than that. We just lost our focus and didn’t stay engaged in every point. So, we really focused on that for the next set, and that really showed with the score there.”

At the service stripe, senior setter Ava Nestor had a 6-0 run to open the frame, sophomore defensive specialist Laney Klika had a 7-0 run, junior defensive specialist Brooke Clair had a 5-0 run, and the elder Klika served out the last three points of the frame – none of them had aces or service errors in the mix.

“Our ball control was extremely well,” Coughlin said. “So, (Perkins) was doing a better job of keeping the ball off the floor on their serve receive, but they were giving us free balls and just standing on the ground attacking it back at us.

“And Emmy Klika is going to pick. There’s not many balls she’s can’t pick up, which was allowing us to run an offense that we wanted.”

The elder Klika recorded another 32 digs against Perkins, which allowed Nestor to set up 48 assists for the match.

“When it comes down to it, our blocking is really strong,” Randorf said. “We really do focus a lot on that in practice too. So, when it comes to games, it really is a momentum changer for our team – aces along with blocks. That allows us to go on runs and keep getting points.”

While Randorf, MacLellan and Carter pretty much ran the hitting and blocking show in the first two sets, Gilmour 5-foot-11 junior outside hitter Sabrina Gremm took over with seven of her 12 kills in that 25-13 final frame.

Also with Rarick, who averages two kills per set this season, opposing defenses really do have to try and pick their poison in trying to stop five Lady Lancer hitters.

“Any one of them really can take over any set,” Coughlin said. “Plus, we play pretty high above the net. You know, we have a lot of girls who are touching 9-9, 9-10, 9-11. So, the level that we’re playing at is really high, and that’s where a lot of blockers will really struggle.

“So, unless they can block 9-9, 9-10, we’re going to hit the high fingertips, and Sabrina does a nice job going high off the ends out of bounds or to the back wall. That’s one thing she succeeds at very well.”

With the regional title, Gilmour is set to make its 10th final-four appearance since 2007.

The Lady Lancers will take on state No. 6-ranked Tipp City Tippecanoe (27-0) in the state semifinals at 1 p.m. Friday at Vandalia Butler High School, just north of Dayton.

The winner between Gilmour and Tippecanoe will play in the state championship against either No. 2-ranked Plain City Jonathan Alder (22-0) or No. 4-ranked Notre Dame-Cathedral Latin (15-3) at 9 a.m. Sunday in Vandalia.

“This is definitely amazing, especially because we didn’t even know if we were going to have the opportunity to play a season at all,” MacLellan said. “As a senior, this is the most important thing for me, because I don’t have a state title under my name yet. So, this is our last chance to do it, and we have two more games to go.”