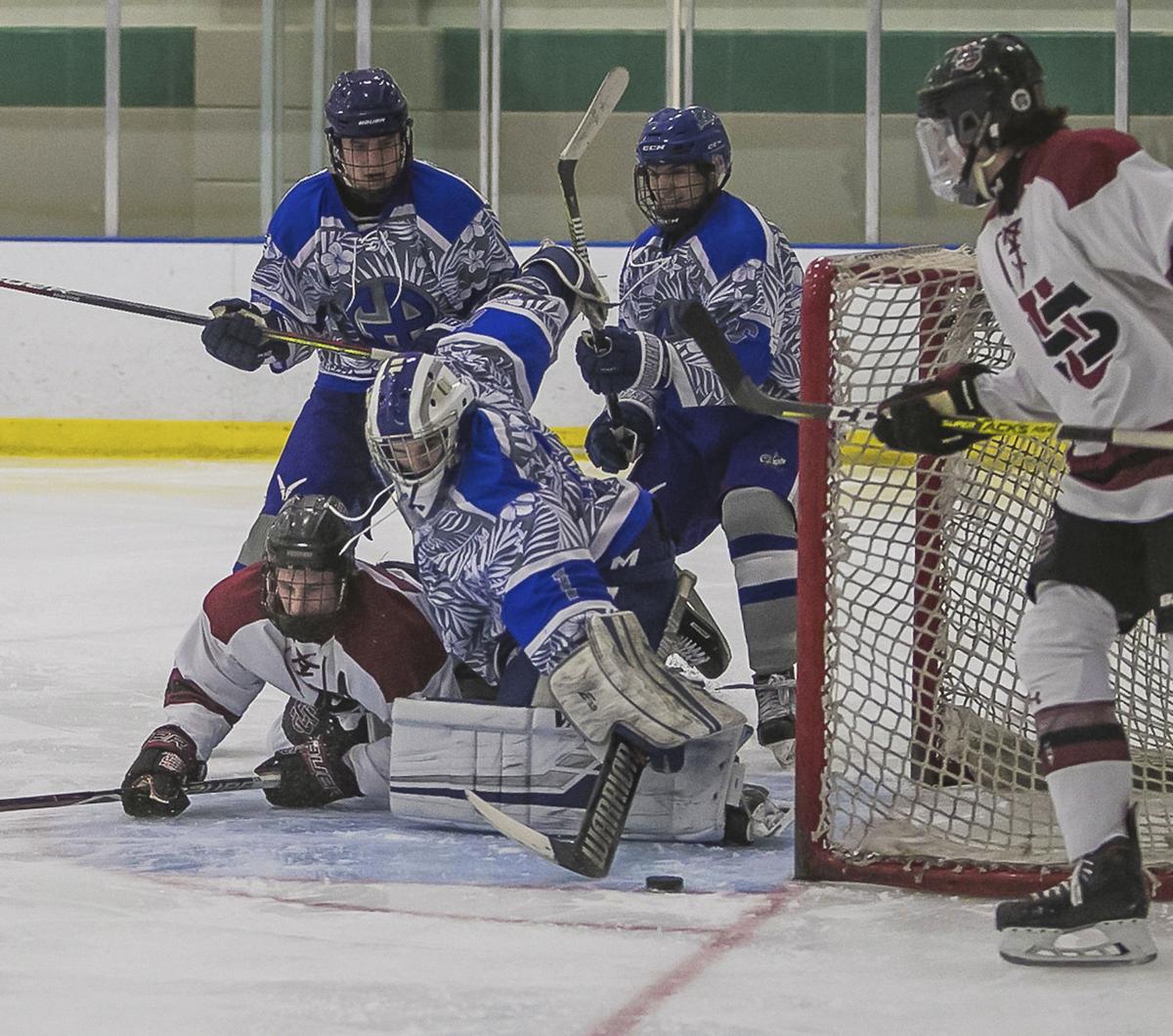 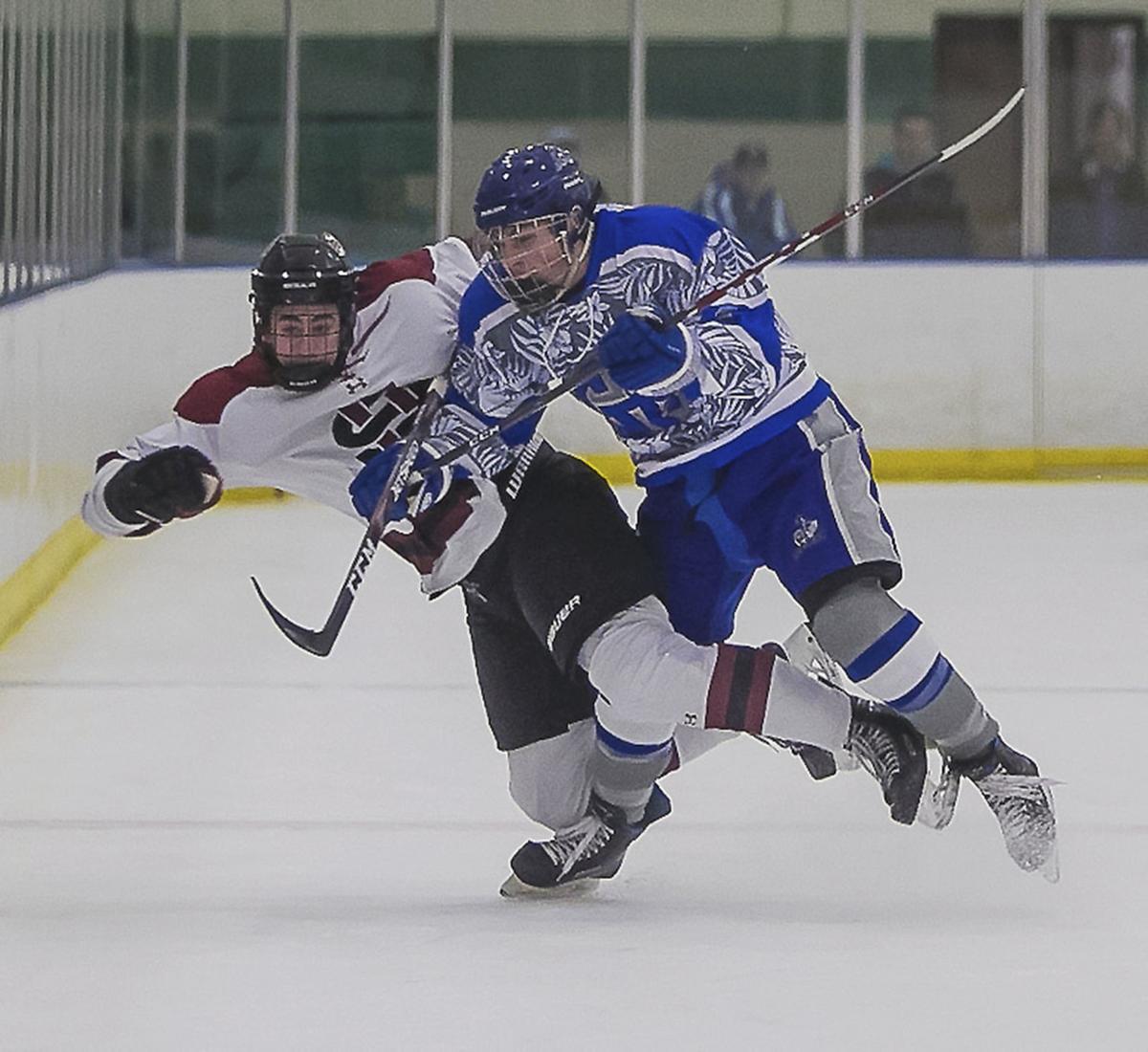 The days of University School hockey taking out the broomsticks on rival Gilmour Academy are over.

Behind a three-apple showing from Lancer starting junior center Joe Roddy, as well as a shorty feed from Charlie Tuggey to fellow junior wingman Luke Robertson, the Gilmour boys defeated the Prepper puck-handlers, 4-1, on Sunday evening in Cleveland Heights.

Also beating University, 3-0, on Dec. 4 in Gates Mills, the Gilmour Icemen (23-7-1) claimed the series sweep against their adversary and improved to 7-0-1 in the Great Lakes Hockey League to defend their regular-season title in the most competitive conference in Northeast Ohio.

While Gilmour has won six of its past nine meetings with University (12-16-1), the Ice Preppers previously owned a 15-game win streak in the rivalry between the 2000-01 and 2016-17 seasons, repeatedly ending the Lancers’ campaigns in district play.

“We swept the regular-season series with our rivals. That’s a big statement,” Gilmour 15th-year head varsity coach John Malloy said. “We’ve been on the other end of that many years. So, having an opportunity to win in their building after a really emotional game yesterday, I think that’s a good statement for our boys.”

The Lancers, ranked No. 3 in the state coaches poll, behind St. Ignatius and Upper Arlington, also defeated Shaker Heights, 4-1, in league play on Saturday night, behind a pair of lamplighters from senior wingman Justin Evans.

So, on the latter end of a back-to-back, they’d need their legs to show up against University on Sunday at the Olympic-sized rink in Cleveland Heights.

“US played really hard, and so did we,” Malloy said. “It was a good game. I think they outshot us, but I just liked the way we kept coming. So, anytime you can beat a rival school and a good team like that twice in the same season, that’s always a nice compliment to the players.”

While University ended up putting 26 shots on cage to Gilmour’s 22, the maroon-and-black shooters were no match against Lancer junior netminder Dylan Stefan, who previously shut out US during that 3-0 result on Dec. 4.

With Gilmour junior Toby Herlong also putting up a wall in front of the cage this season, coach Malloy said his decision of which goaltender to ride in the playoffs won’t come easy – both goalies have played 17 games and are north of a 93-percent save ratio.

Gilmour’s offense, meanwhile, buried its first shot on goal against University, when Roddy had a one-on-one opportunity with a Prepper defender in the left circle. The defenseman laid down on his stomach to force Roddy to shoot high, but line-mate Tuggey was trailing for the follow-up tally just 31 seconds into the game.

“I was calling for the puck for a drop, and then the guy just played him, and the puck just popped out to me,” Tuggey said. “I just wanted to get a quick shot on net, and it ended up going in. I think that set the pace for the rest of the game. We were all going, working hard, and I think it got the rest of the team pumped.”

University had a pair of power-play opportunities later in the opening frame, but the Preppers couldn’t get a single shot off on cage against Gilmour’s penalty kill.

In fact, University was rendered ineffective on five power plays during the course of the game, as Gilmour’s Roddy, Robertson, Evans and senior forward Bryce Hofstrom, as well as defensemen like senior Jake Howse, senior Tony Iacobell and sophomore Vince Stafford, never allowed the Preppers to get settled in the zone.

“Our penalty kill has been lights out this year,” Malloy said. “They work together. That’s the key on any penalty kill, is that guys have to work together. When you press, you have to press as a unit. If you do that, you negate the power play’s ability to move to that extra man. And then you’ve got to win battles, and our guys do that.”

In the second period, Robertson won a turnover on a forecheck at the point, went to cage, Roddy followed up Robertson’s play, and then Robertson followed up Roddy’s rebound for a 2-0 lamplighter with 11 minutes to go in the frame.

“I rely on my line-mates; they rely on me,” Robertson said. “We have good chemistry built up from practice. And I just caught the puck off the boards, and I just scooped it over to Joe, he took a shot, and I just followed up to the rebound, played to the whistle. That’s how it went.”

University answered 17 seconds later, however, when senior center Beau O’Sickey broke down the left wing in transition and slotted a low tally on Stefan’s glove side to cut the Preppers’ deficit, 2-1.

The maroon-and-black skaters then had a power-play opportunity with a chance to net an equalizer later in the period.

Instead, Gilmour buried a short-handed tally when the Lancers’ penalty kill pressed into the forecheck, Tuggey won a battle on the corner boards and dished out an apple to a cutting Robertson down the slot. Robertson hammered home a one-timer shorty for the Lancers’ 3-1 lead with 4:18 left in the frame.

The rivalry got a bit chippy in the third period, specifically when Gilmour’s Stefan covered up the rubber on the crease, and then University junior John Pape pounded on the back of his helmet when he was face to the ice.

Pape was sent to the sin bin, but so too was Gilmour’s Iacobell and Robertson in retaliation for defending their goalie, and US was on yet another power play with 11:19 to play. No goals came of it.

University then had its fifth power-play opportunity with 7:42 to play, but Gilmour’s penalty kill kept on keeping on, and no goals came of that either.

The Lancers finally were awarded their first power play of the game, with 5:24 to play, and they capitalized. Roddy won a battle behind cage and delivered a golden assist to Tuggey for a one-timer from the lower right circle for a 4-1 lead with 3:50 to play, which held up for the final.

“He always works hard in the corners,” Tuggey said of Roddy. “He gets himself into a dirty situation, in a good way, like battling for the pucks, and I knew he was going to win the battle, and I called for it in front of the net. I couldn’t have done it without him.”

The starting line of Roddy, Robertson and Tuggey accounted for all four Gilmour goals on Sunday. Roddy had three assists.

On an apple high as of late, Roddy also had a program mark of five assists during an 11-1 triumph against GLHL foe Padua Franciscan on Feb. 2.

“One of the most difficult things that I’m not even sure a coach can teach is vision and a sense of when and where to pass the puck,” Malloy said. “And Joe (Roddy) has that. He sees the ice well. And the fact that he gets to a lot of pucks and wins battles allows him that opportunity to make plays. Sometimes kids have one of those and not the other. He combines both. He gets and wins battles and then can see the ice and makes plays.”

Earning a first-round bye in the GLHL Cleveland Cup tournament, Gilmour will play Holy Name (16-10-2) in the semifinals at 6 p.m. Friday at OBM Arena in Strongsville. The winner will play in the title game at 7 p.m. Saturday at OBM.