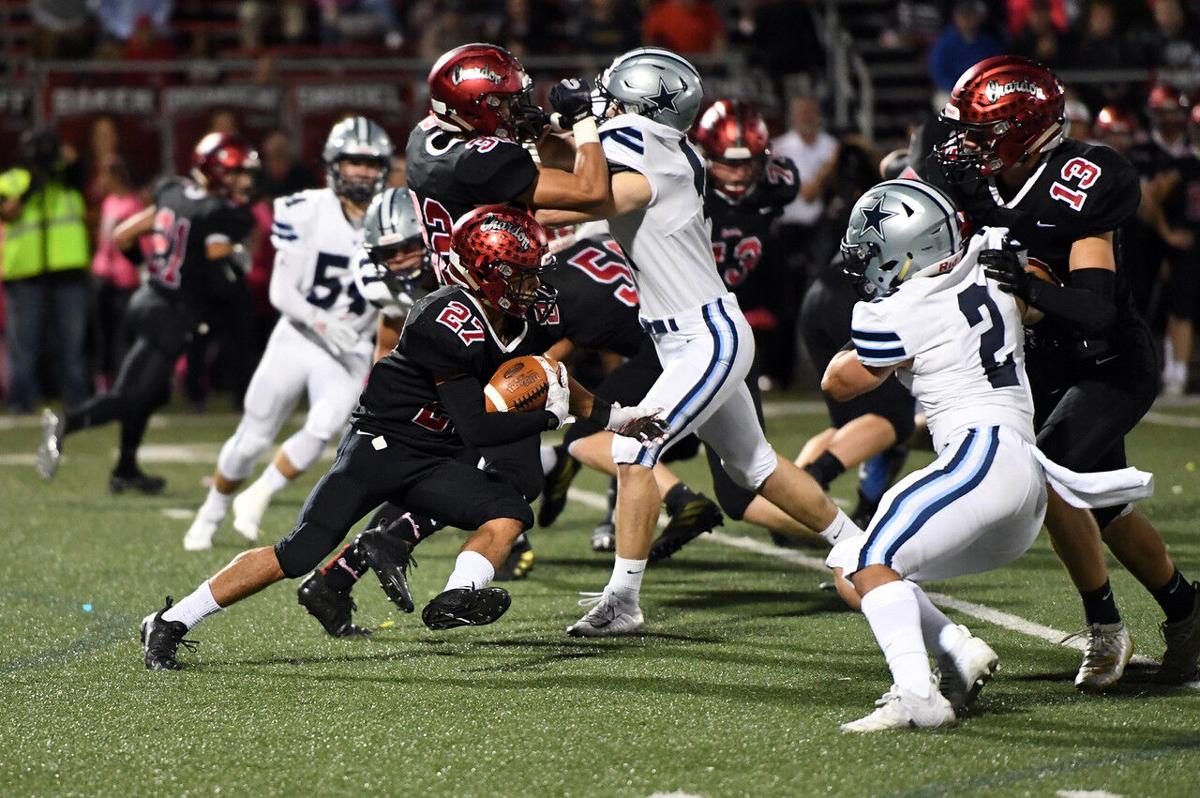 Chardon 5-foot-11, 170-pound running back James Pettyjohn (No. 27) finds a hole courtesy of the Hilltoppers’ wing-T during a 17-16 victory against Kenston last season. Now a senior, Pettyjohn returns to the starting lineup after rushing for 1,100-plus yards in 2019. 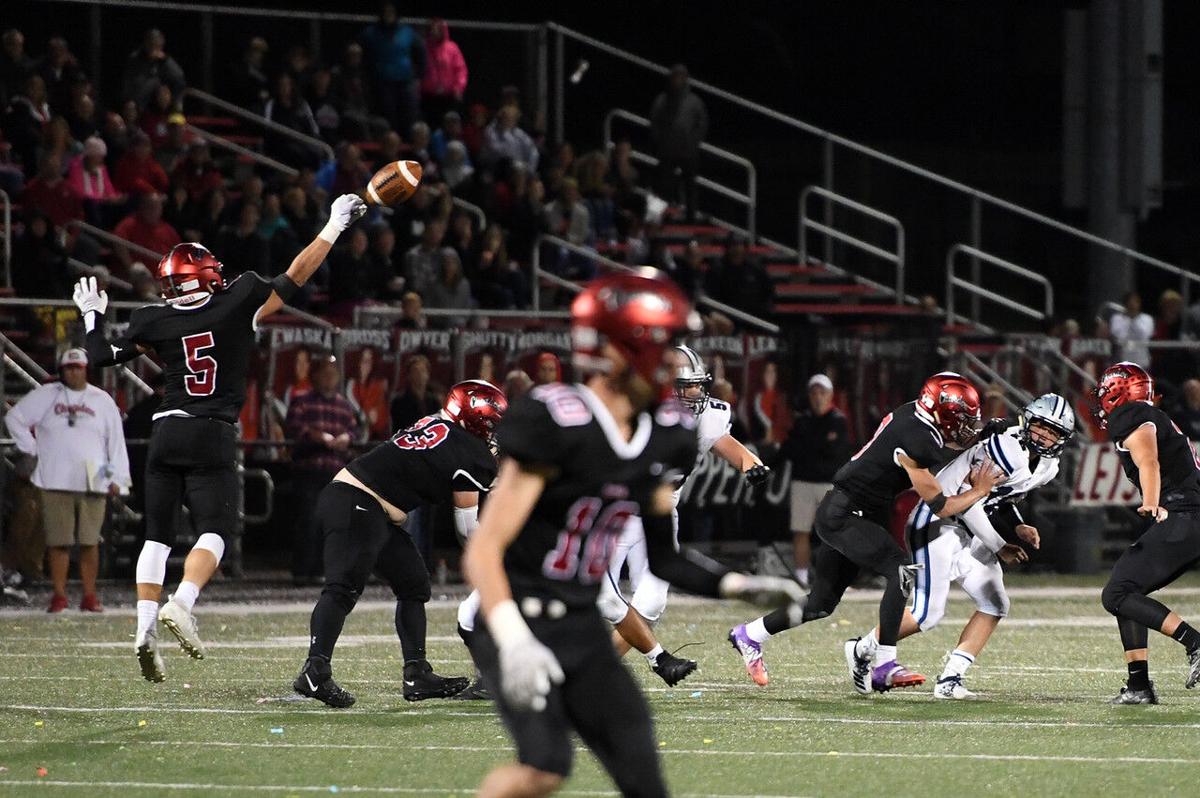 Chardon 195-pound linebacker Vince Ferrante (No. 5) blocks a Kenston pass during the Hilltoppers’ 17-16 win last season. Now a senior, Ferrante returns as an all-Ohioan with 125 tackles from 2019.

Chardon 5-foot-11, 170-pound running back James Pettyjohn (No. 27) finds a hole courtesy of the Hilltoppers’ wing-T during a 17-16 victory against Kenston last season. Now a senior, Pettyjohn returns to the starting lineup after rushing for 1,100-plus yards in 2019.

Chardon 195-pound linebacker Vince Ferrante (No. 5) blocks a Kenston pass during the Hilltoppers’ 17-16 win last season. Now a senior, Ferrante returns as an all-Ohioan with 125 tackles from 2019.

Mathematically, the whole being greater than the sum of its parts doesn’t seem to add up.

But when adversity hits on the gridiron, players don’t need a calculator to realize that when they work together, everyone achieves more.

And make no mistake, every high school football team gearing up for a 2020 fall season in Ohio is facing trials unlike past seasons, from not having locker-room access, to playing in stadiums that are limited to 15 percent capacity, and to wearing masks on the sidelines.

Over in Chardon, where the Division III Hilltoppers are returning from a 10-3 regional runner-up campaign, 10th-year head coach Mitch Hewitt has been thinking outside the box to try and find team-building opportunities for his gridders in a time when gatherings, like team feasts, are not socially accepted.

While high school gridders have worked in pods and followed other protocols in each phase of their return to play this preseason, it’s perhaps naive to think they aren’t spending time together outside of football.

“Kids are social. Human beings are social,” Hewitt said. “And what we’ve done over the last six, seven months, I think, has been really, really hard on kids. I think it’s been hard on adults. It’s been hard to bond. I mean, we’re doing things, but the reality is that I think there’s a gratefulness, too, that teams are sort of embracing.

Offensively, the Hilltoppers are returning seven starters in the 40th edition of their pistol wing-T, an elusive run system that has been in place through three coaches and stood the test of time – Chardon hasn’t had a losing season since 2011.

“This is the 40th year of our offense – 40 straight years of running essentially the same offense,” Hewitt said. “Obviously, we’ve evolved it. There’s new things wrinkled into it. But it’s one of the things we pride ourselves on. And I think it’s one of the things that allows us to be successful almost every year.”

Hewitt owns a 70-31 mark since taking the helm.

“We don’t really have down years even though talent may not always be the same,” he said. “Our kids have bought into a system that allows us to compete even when our talent maybe doesn’t necessarily match our success.”

But the Hilltoppers have a new starting quarterback in 6-foot-1, 180-pound senior Drew Fetchik. Signal-callers at Chardon might not get the accolades of stuffing the stat sheet with passing yards, but their value doesn’t go unnoticed in house, Hewitt said.

“Really, it’s true at every level that, if you don’t have a quarterback, you don’t really have a very good team,” the coach said. “So, we think very highly of Drew. He’s a great kid, very poised, calm under pressure, has all of the skill sets that we look for in our offense. We audible 40 percent of the time, which is rare for high school athletes to do. And he’s got to know what we’re looking for. He’s a coach on the field.”

At center will be 5-foot-10, 285-pound senior Dylan Friend, while 6-foot-5, 265-pound senior George LeMaster is getting the nod at left tackle.

“We plugged in some big guys,” Hewitt said. “I would say my offensive line going into Mentor’s scrimmage was my biggest concern. They proved to be improving at a faster pace than even I thought. So, I was pleased with that, especially against Mentor’s defensive front.”

Hoping to be two-platooned in the trenches, Chardon returns 6-foot-4, 210-pound senior Myles Mendszoon, who had 8 1/2 sacks last year at defensive end, and 6-foot-1, 230-pound senior Gavin Slife at tackle, while 6-foot, 200-pound senior Evan Gardner is getting the nod at the other tackle spot.

Chardon’s linebacker corps will be headlined by 195-pound senior Vince Ferrante, a second-team all-Ohioan who had 125 tackles and three fumble recoveries last season, as well as 195-pound senior Cade McDevitt, who had 100 tackles with five sacks.

At the other linebacker spots will be 205-pound senior Blake Barker and 205-pound junior Christian Hall.

In the secondary, the Hilltoppers return 6-foot-4 junior Nathanael Sulka and Toth as safeties, as well as 6-foot senior Kevin Doyle at cornerback, while 5-foot-11 sophomore Trey Liebhardt will take over the other cornerback spot.

“I think Nathanael Sulka is a Division I player who will get offered here shortly,” Hewitt said. “But we’re tall, and we can run, and we can hit. Our defense is going to be hard to score on.”

And slated to take over kicking duties is 6-foot-1 junior Nathan Tager, who has some big steps to follow with the graduation of second-team all-Ohioan Keaton Ziegenfuss.

In the offseason, Hewitt said he would have said Ziegenfuss was the biggest loss the Hilltoppers would have to make up for in the 2020 season.

“And somehow we stumbled on a kid who’s a basketball player, who’s a soccer player, who’s in the marching band, and he has a college-like leg,” Hewitt said of Tager. “Now, whether or not he can perform in game-pressure situations, that remains to be seen, but we are very optimistic about his abilities as far as our kicking game goes.”

The Hilltoppers will kick off their 2020 campaign when they host Division II Western Reserve Conference foe Eastlake North at 7 p.m. Friday at Memorial Field.