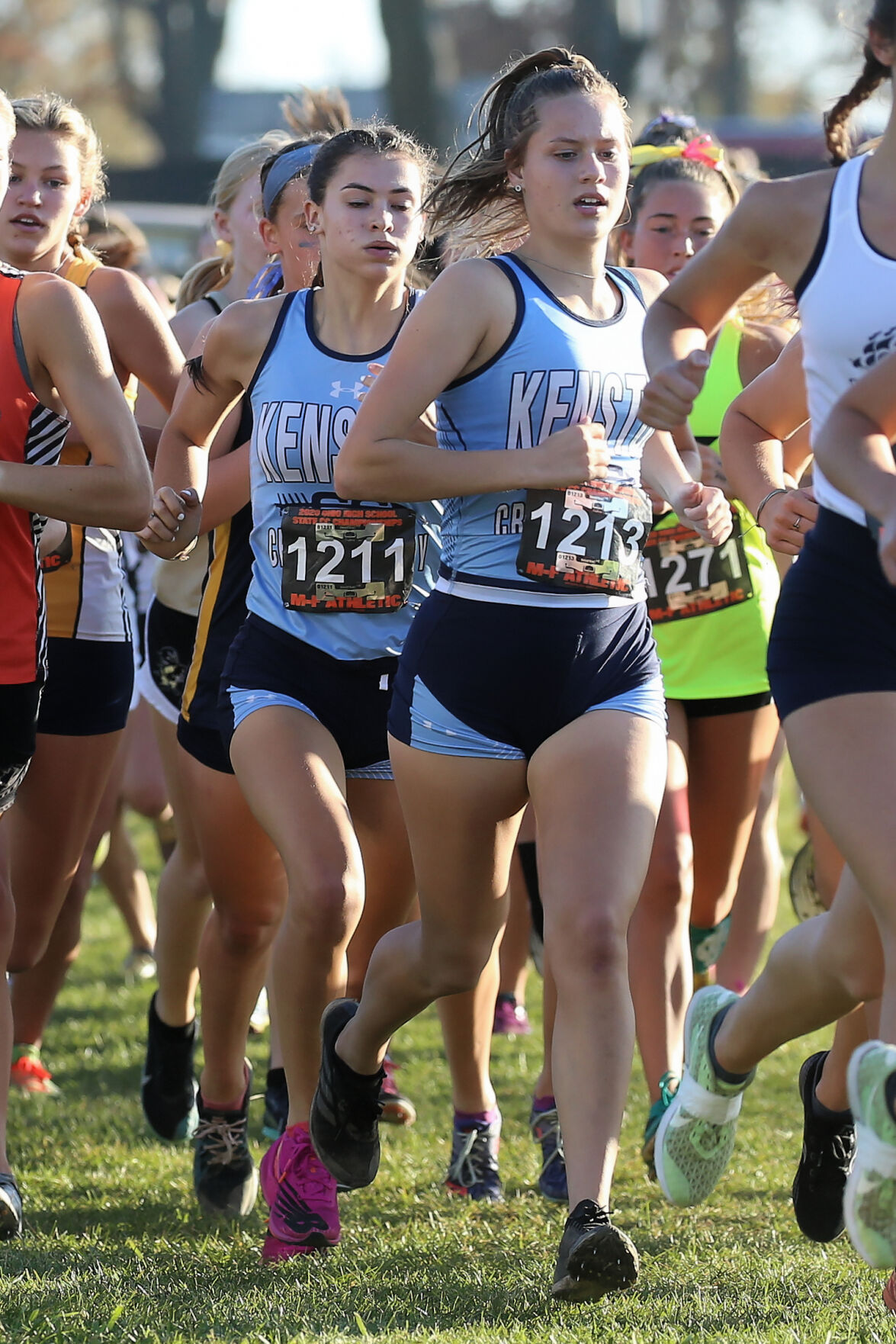 Kenston senior Ellie Pleune (right center) and sophomore Paige Masson get out to a reserved yet aggressive start during the Division I state cross-country championship on Saturday at Fortress Obetz. 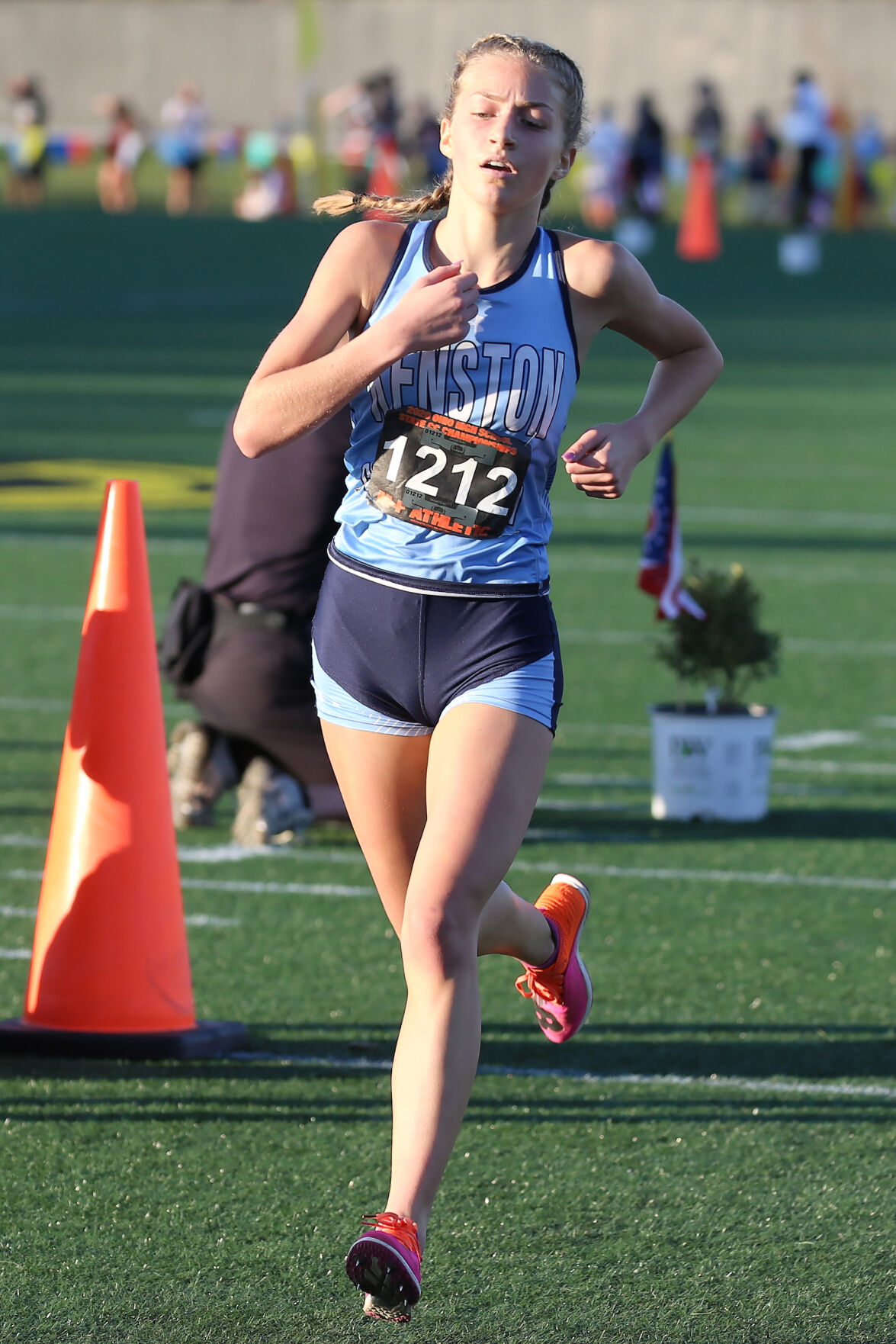 Kenston sophomore Cece Paglia runs to an all-Ohio finish in 18:32 during the Division I state cross-country championship on Saturday afternoon at Fortress Obetz. 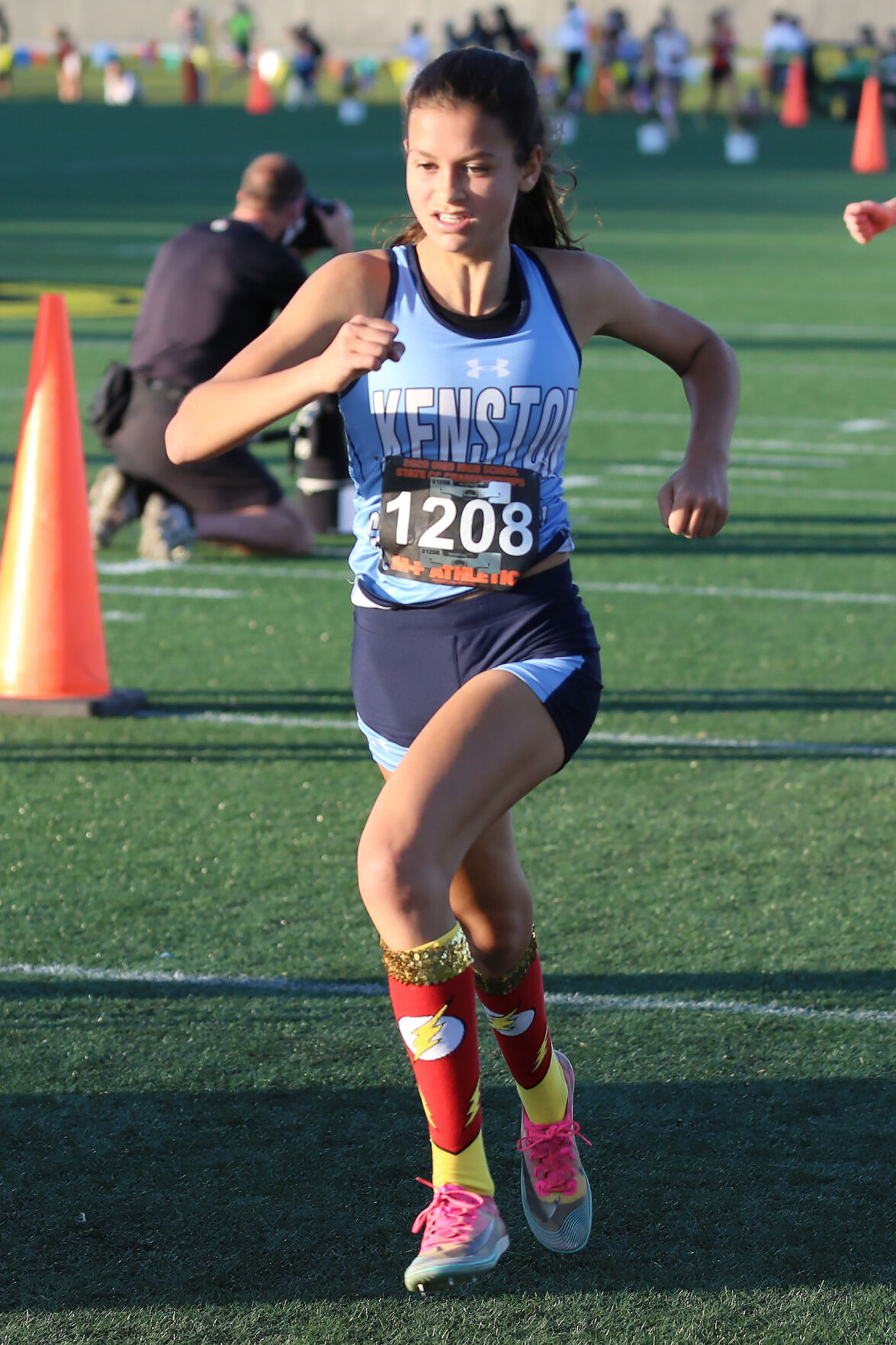 Kenston freshman Emerson Greene races to the finish as the Lady Bombers’ three runner during the Division I state cross-country championship on Saturday afternoon at Fortress Obetz, just south of Columbus. 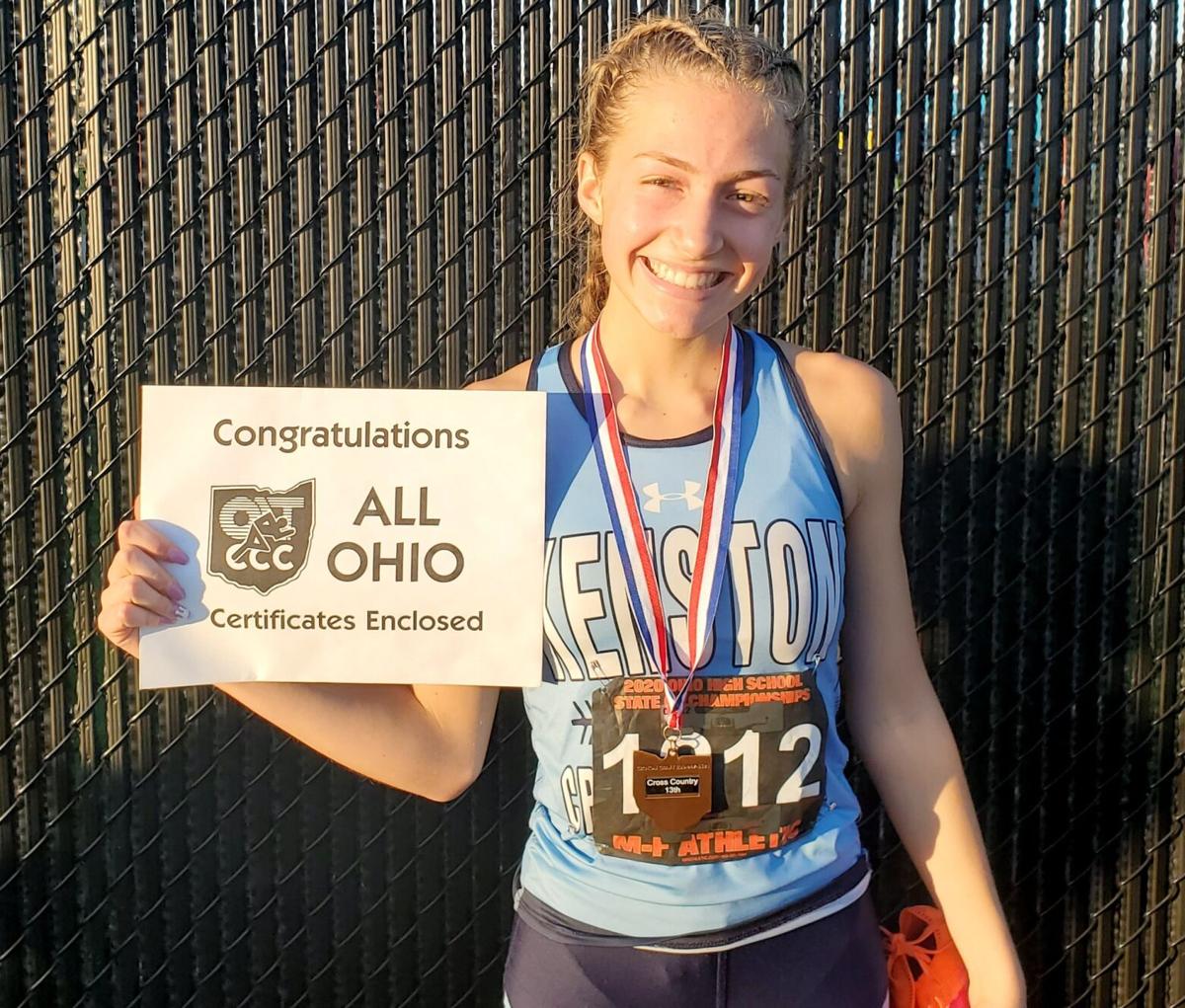 Kenston sophomore Cece Paglia shows off her all-Ohio certificate as the first Lady Bomber harrier to earn that honor since Taryn Surtees and Jessie Bigelow in 2004.

Kenston senior Ellie Pleune (right center) and sophomore Paige Masson get out to a reserved yet aggressive start during the Division I state cross-country championship on Saturday at Fortress Obetz.

Kenston sophomore Cece Paglia runs to an all-Ohio finish in 18:32 during the Division I state cross-country championship on Saturday afternoon at Fortress Obetz.

Kenston freshman Emerson Greene races to the finish as the Lady Bombers’ three runner during the Division I state cross-country championship on Saturday afternoon at Fortress Obetz, just south of Columbus.

Kenston sophomore Cece Paglia shows off her all-Ohio certificate as the first Lady Bomber harrier to earn that honor since Taryn Surtees and Jessie Bigelow in 2004.

Tapered legs are often impatient legs at the state cross-country meet, when a runner can feel so great that first mile that he or she ends up burning the jets too early and dropping like a fly by the second or third mile.

But when young athletes want to get up and get after it on the biggest stage of the season, making sure they leave nothing out on the 5-kilometer course, or 3.1 miles, coaches sometimes struggle to get that point across, especially to novice harriers.

When it came to the Kenston cross-country girls, who were making their program’s first state appearance as a team since 2004, perhaps fourth-year head coach Chris Ickes got his point across a little bit too well.

While the Lady Bombers entered the meet ranked No. 5 in the Division I state coaches poll, their front five runners sat in 10th as a team at the mile mark during the big-school race on Saturday at Fortress Obetz, just outside of Columbus.

Lone senior Ellie Pleune, running in her fourth state meet, was the only Lady Bomber with big-dance experience.

“Our strategy is that the first mile can’t win the race, but you can definitely lose the race,” Ickes said. “So, we didn’t need to do anything crazy to get out in front. The opening mile is typically the fastest mile of the entire year. And for some athletes, it’s a career personal record in the first mile with 2.1 (miles) still to go.

“So, we wanted to make sure we got a good start, we got a fair start, tried to move out of traffic, tried to stay outside, but the team strategy the entire time was to run the best second mile in the field and hold on, because we knew our endurance training was our strength, and then pass as many people as we could in our third mile and really hope to bring it home.”

Not only did the Lady Bombers’ front five runners combine to pass 52 competitors to move up to seventh by the 2-mile mark, but they continued to surge and knock off another 35 competitors in the final third of the race to score 180 points and finish fifth – their program’s best showing in a state meet in any division.

Kenston was the only Division I team in the girls’ field on Saturday to move up two team places in the final mile.

“I think they executed on the plan almost perfectly,” Ickes said. “They showed a lot of faith in me and trust in me to execute on that strategy, but they also showed a lot of resilience and personal strength to know that they had to crush the second mile, which they did.”

Leading the Lady Bombers through that near-flawless execution, sophomore Cece Paglia was in 35th among 176 runners at the mile mark, moved up to 19th at the 2-mile mark and then brought it home to cross the finish line in 18:32 for 13th.

Not only did Paglia secure all-Ohio honors with a top-30 finish, but she smashed Vonnie Downing’s program record from 1996 by 14 seconds.

In addition, Paglia is the Kenston girls’ first all-state harrier since 2004, when then-sophomore Taryn Surtees and then-senior Jessie Bigelow finished 22nd and 24th, respectively, in the Division II state meet.

While Paglia passed 22 competitors from the mile mark to the finish, Masson passed 14, Greene passed 41, and Kapcio passed 37. And, while Kenston finished fifth as a team, Pleune was the second-fastest four runner in the field of 20 teams.

“All of us were very happy for each other. We knew right when we finished that all of us gave it our all and that was the best that we could do for that day,” Paglia said. “So, we were jumping up and down when we saw that we got fifth. We were very excited about it.”

And while Paglia was 10th overall during the Boardman regional meet the previous week, she relied on her training to find that next gear when she needed it for the biggest race of the season – she was the fourth-fastest runner representing Northeast Ohio.

That said, Paglia and the rest of the Lady Bombers had a whole heap of motivation since the conclusion of last season.

“We had a setback last year, where we didn’t make it out of our region,” Ickes said. “Cece Paglia was actually our (sixth) runner in that race, and she put the weight of the team on her back. She came across the line in tears, and she was distraught long after the race had finished.

“Since then, she has just worked tirelessly and confidently, and she went straight to the front of our team. She didn’t only do well for our team, but she’s one of the best runners in all of Ohio now. She beat girls that everyone else was talking about. And here she is now, willing herself and willing her team to be the absolute best they can be.”

In addition, the Lady Bombers had leadership from Pleune, Klotz and senior postseason alternate Amelia Witmer-Rich, while Masson, a track standout, really figured out what cross-country was about this year, Greene was a huge spark as a freshman, Kapcio continued to be consistent and dependable as a dynamite second-half runner, and Van Skyhock kept the team together with her personality, Ickes said.

The bottom line is that, while Paglia took the spotlight with her top performance, all the Lady Bombers ran for one another, he said.

“The whole team rallied behind each other, and they knew there was a chance that any one of our top four girls could have set a school record,” Ickes said. “And all the girls wanted Cece to see success. They knew that the more success Cece had, the better success the team could have. They really are selfless in that they celebrated Cece’s school record as much as they celebrated the team’s fifth-place win.”