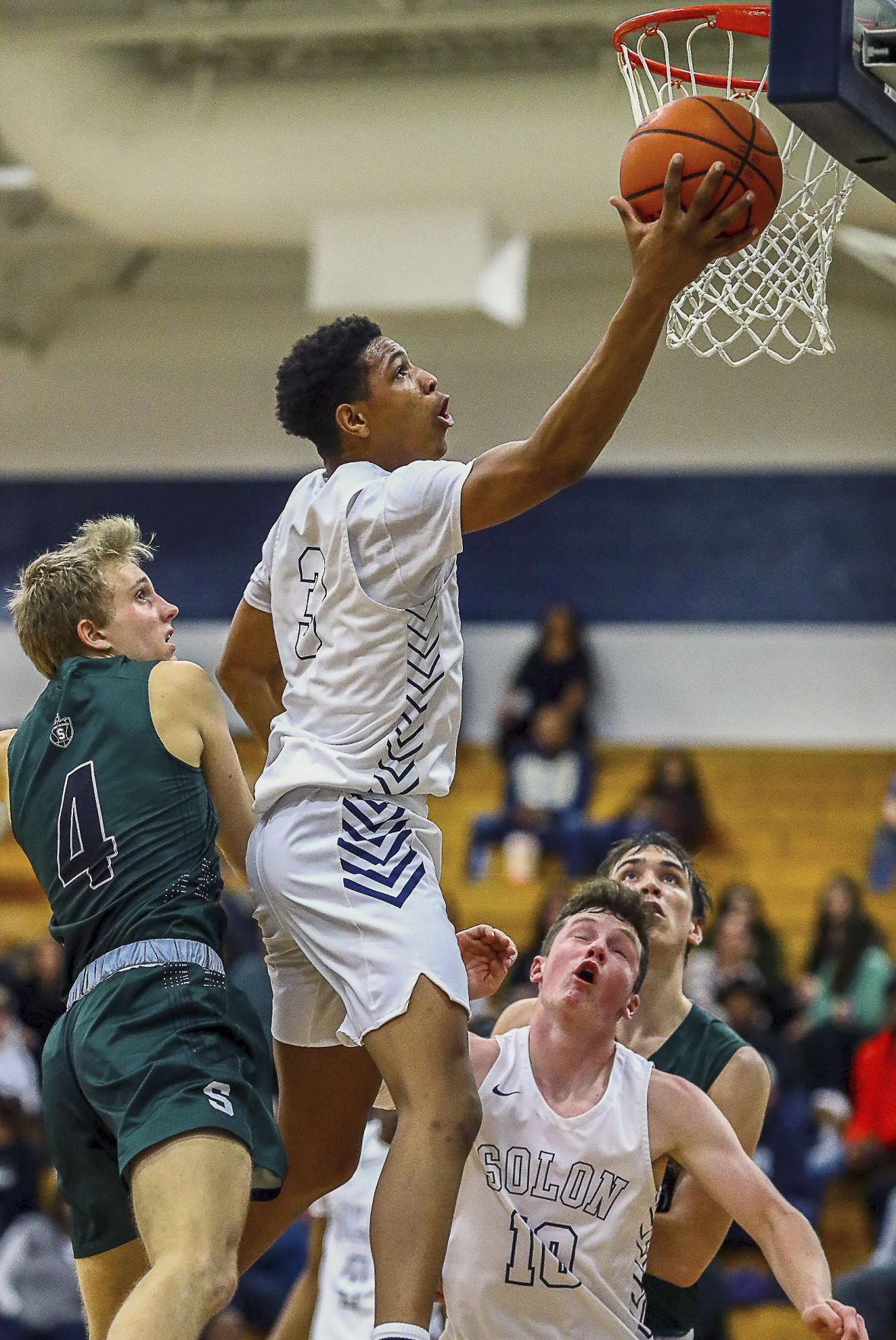 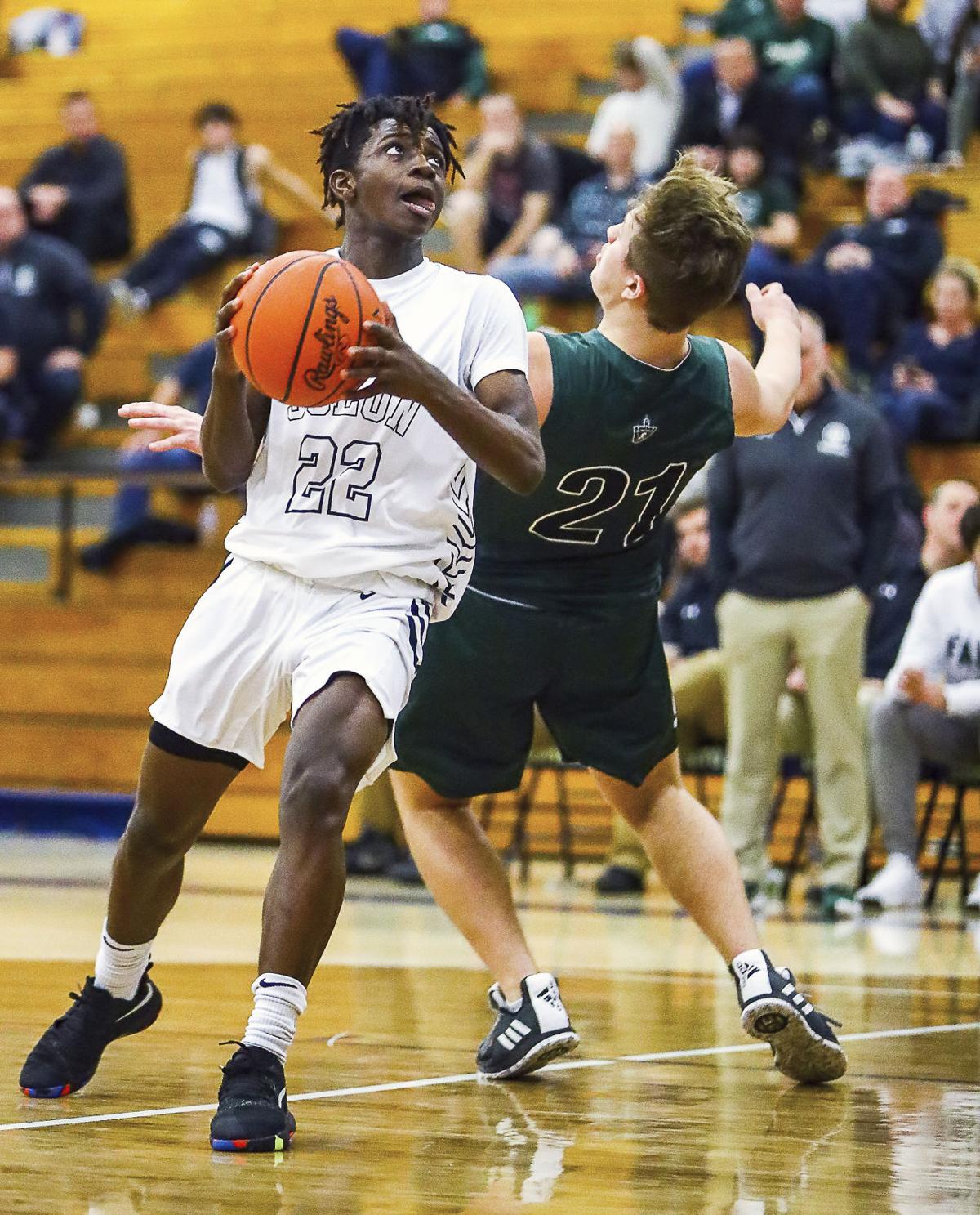 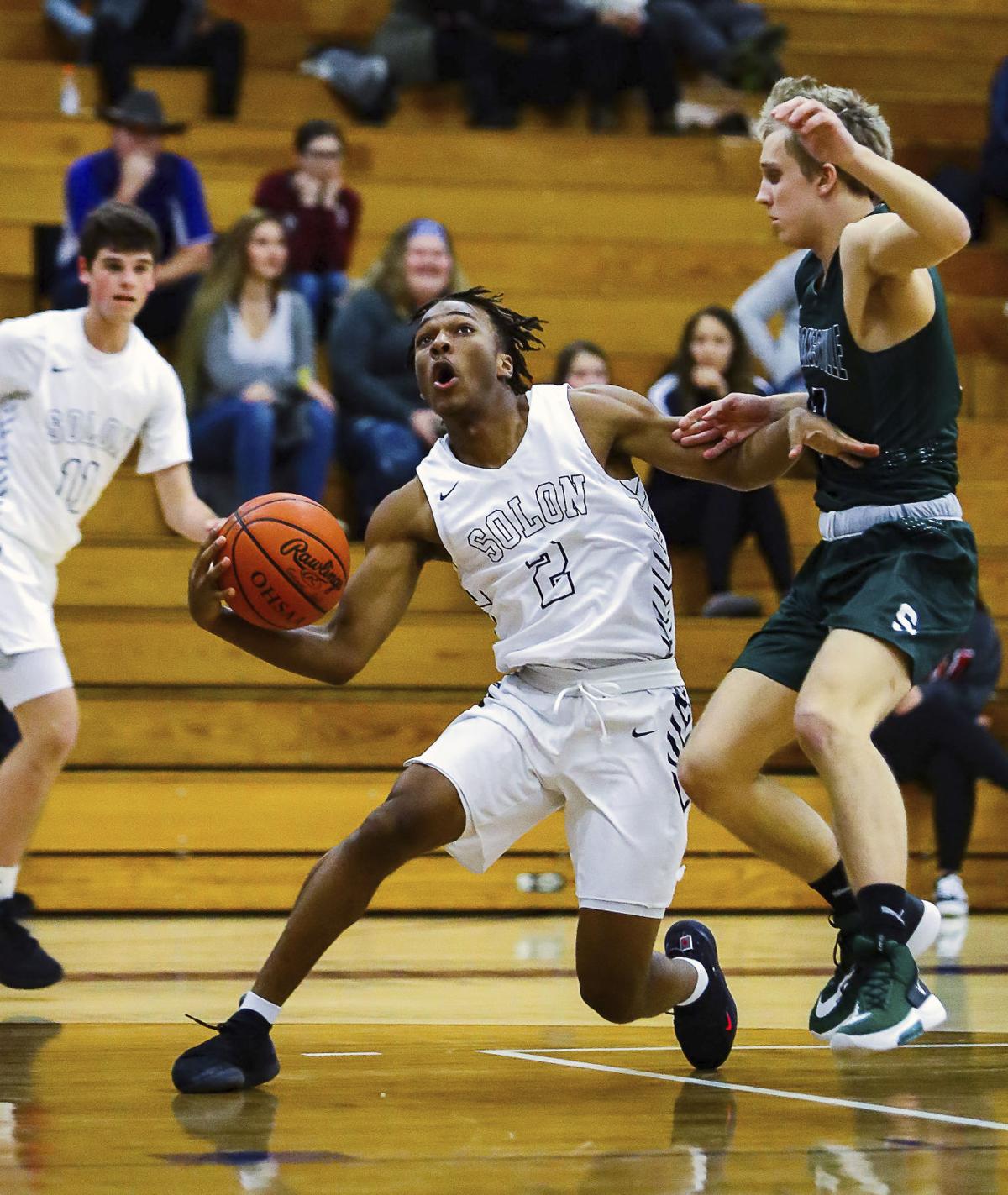 Solon junior Marcus Steele goes hard to the hole during his game-high 20 points against Strongsville on Friday night at his home court. 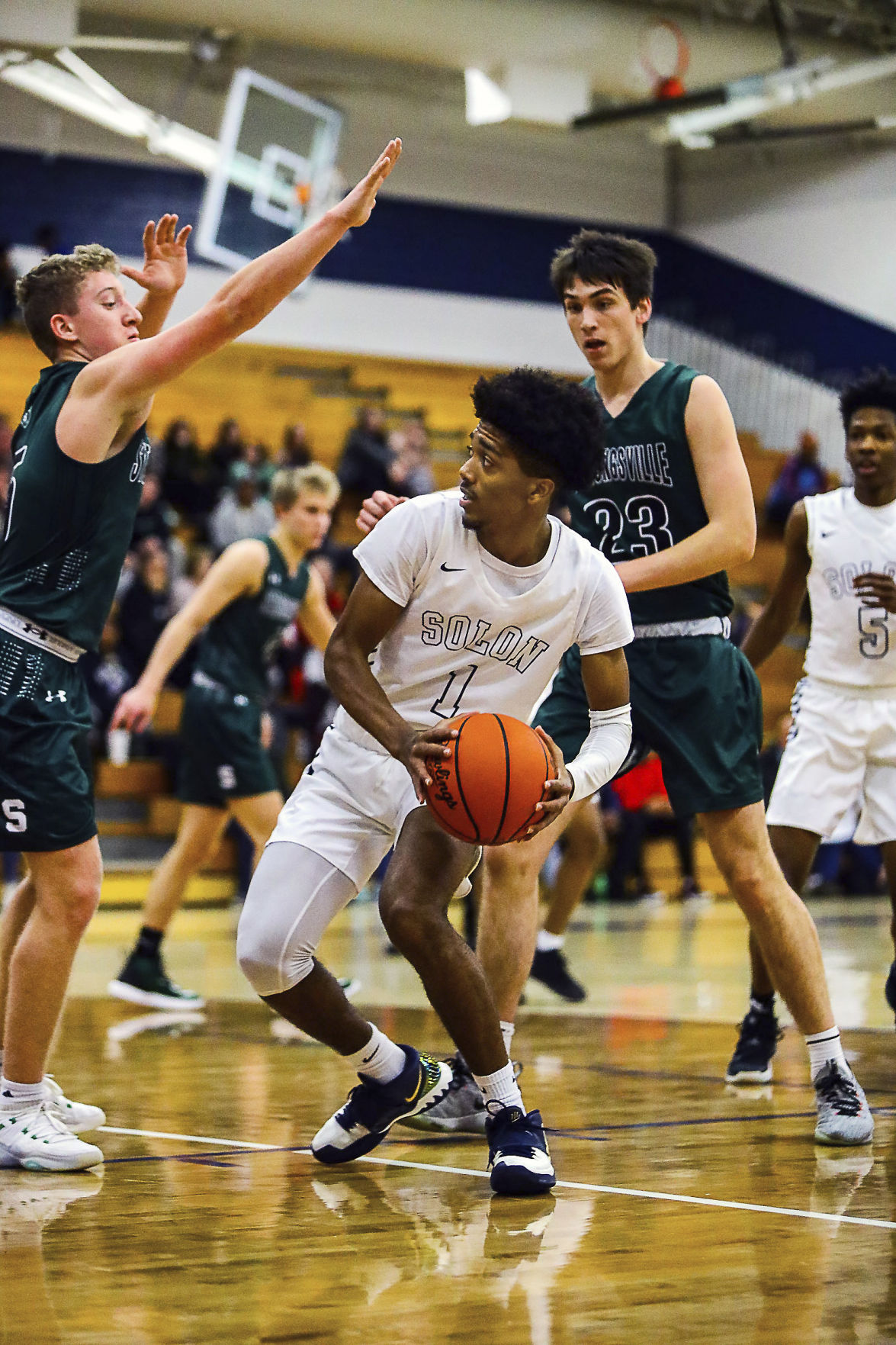 Solon senior Brandon Chambers avoids trouble in the paint during the Comets’ league win against Strongsville on Friday night. 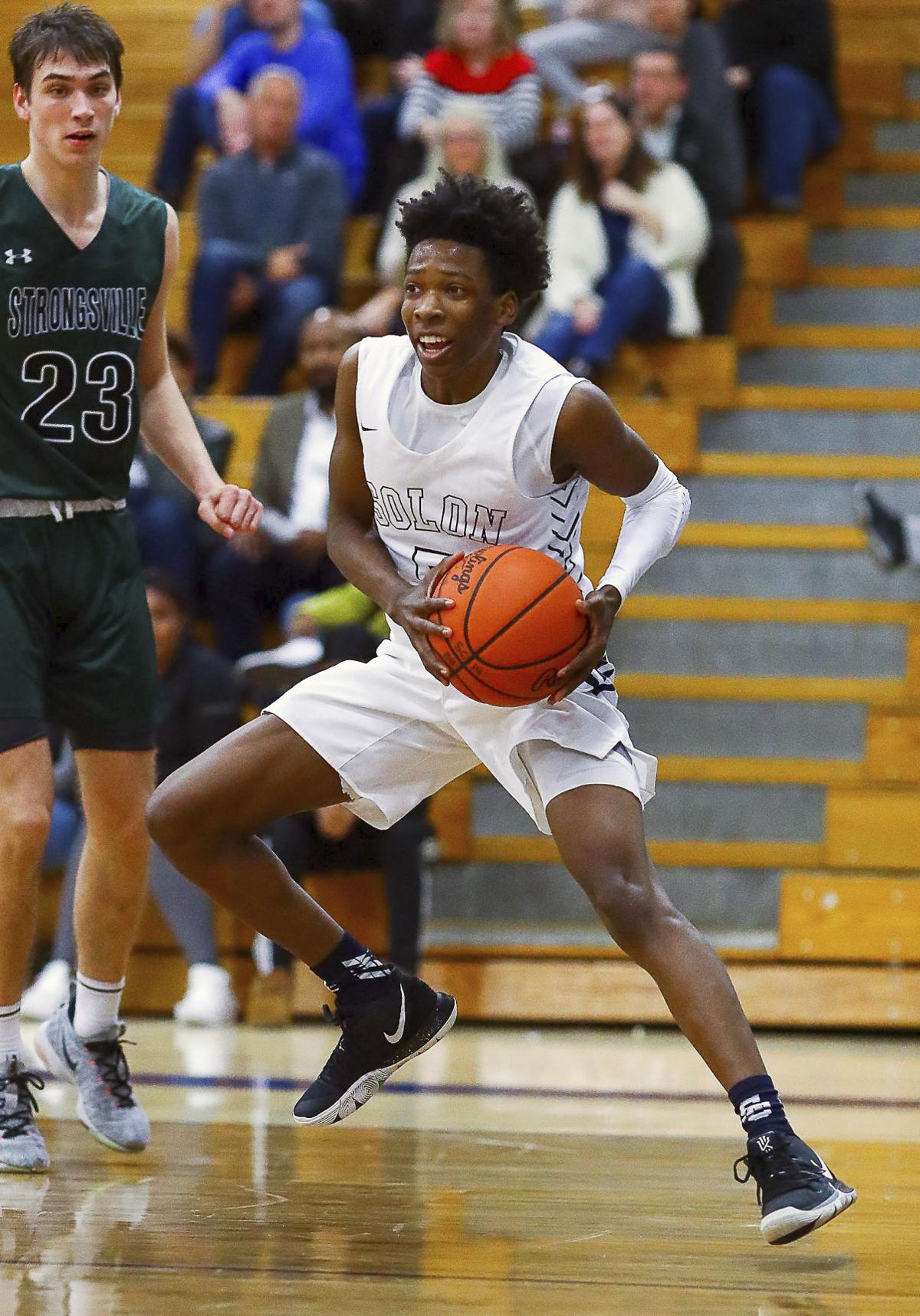 Solon junior Marcus Steele goes hard to the hole during his game-high 20 points against Strongsville on Friday night at his home court.

Solon senior Brandon Chambers avoids trouble in the paint during the Comets’ league win against Strongsville on Friday night.

Solon’s 11-point lead in the third quarter dwindled to three, 42-39, with three minutes left in the period during the Comet cagers’ league game against Strongsville on Friday night at their home gymnasium.

Strongsville was a team that struggled with a 1-22 record and a 0-14 mark in the Greater Cleveland Conference last season, but second-year head coach John Lipowski had his 2020 Mustangs (4-8, 2-3) competing at a high level against Solon on Friday, with three veteran starters on the floor as well as 5-foot-9 freshman guard Justin Wypasek showing his handles and scoring abilities.

Wypasek, who would finish with a team-high 17 points on three-of-six shooting from downtown, drilled one of his treys on an inbounds pass from under the bucket to cap off a 10-2 run by Strongsville to help pull the Mustangs within that previously mentioned three-point deficit.

While Strongsville was fixed on riding its starters during that momentum surge, Solon sixth-year head coach Tony DeCesare made his substitutions and put faith in 6-foot-2 junior Jimmie Williams as well as 6-foot juniors Noah Obert, Cam Brown and Pat McQuaide off the bench.

That Comet quartet put the ‘whoa’ on the Mustangs and delivered.

Brown found Williams for a triple to stop the bleeding, and then Brown came up with two offensive boards and assisted Obert for a 3-pointer on a third-chance opportunity. After that, Brown redialed Williams for another triple to end the third quarter with a 51-41 lead.

And to open the fourth quarter, McQuaide took a floor burn on a loose rebound and made a diving outlet pass to Brown for yet another 3-pointer and a 54-41 upper hand to cap off a 12-2 run for the Comet reserves.

The productive 10-man rotation led to an eventual 71-57 victory for Solon (6-3, 3-2). When it was all said and done, the Comets outscored Strongsville, 15-6, on second-chance opportunities.

“We were just able to make one more run to really stretch it out,” coach DeCesare said. “And then once it got to double digits in the fourth, they had to really change the way they were playing. They had to start picking us up in the full court, and I think that played in our hands a little bit, them having to extend their defense.

In particular, Williams scored 12 of his 14 points in the second half to finish six-of-10 shooting, in addition to four boards and an assist, while McQuaide tallied nine points – seven in the fourth quarter – as well as one board, three assists and a steal.

That Comet duo accounted for 13 of Solon’s 20 points down the stretch.

“I just had to get focused,” Williams said about being a difference-maker in the second half. “I wasn’t mentally right in the first half. And I just had to make my shots. I usually shoot it a lot, and I haven’t been hitting the outside shots lately, but now I am. So, I’m trying to shoot them again.”

Before Solon’s bench came to life, Strongsville owned a 17-15 lead at the quarter mark with the Mustangs getting going on five Comet turnovers in the period.

But Solon made its stamp on defense in the second quarter, holding Strongsville to just 10 points in the frame, to take a 36-27 lead at intermission. The Mustangs shot four-of-15 from the field with the majority of their looks coming from outside the paint in that quarter.

Overall, Strongsville attempted 27 of its 57 shots from deep, on a 29.6-percent clip from downtown, and made just two trips to the foul line all night.

“Coach (DeCesare) was saying that if we don’t take them lightly and just put pressure on them the whole game, we’ll come out with the victory,” Solon 6-foot junior Marcus Steele said. “We just needed to find our open looks and play like us the whole game.”

Steele, the lone returning starter for Solon, scored a game-high 20 points on seven-of-seven shooting from the field – 14 of his points came in the first half – in addition to seven boards, five assists and three steals. It was his third straight 20-plus-point game.

Joining Steele in the 20-point category this campaign, 6-foot-3 senior Brandon Chambers, who came off the bench against Strongsville, scored 22 points during a 56-51 come-from-behind win against GCC foe Brunswick on Dec. 20.

Making his first varsity start for the Comets on Friday was 5-foot-10 freshman Rayquan Thompson, a sturdy ball-handler who scored six points with two boards, two assists and a game-high four steals against Strongsville.

“He just can’t let the size and the age of the older people phase him,” said Steele, who also got the varsity nod as a freshman. “You just have to play your game, because you’re on varsity for a reason. You play how you play and how the coach wants you to play.”

Joining Steele and Williams in double-digit scoring against Strongsville, 6-foot-4 sophomore starter Sam Marbury dropped 10 points, all in the first half, including a pair of 3-pointers during that 21-10 run in the second quarter.

Marbury also had five early boards but got caught in foul trouble and didn’t play many minutes in the second half with Solon’s hot bench taking over the game late.

“He’s a guy, similar to Rayquan (Thompson), that when something good happens, he feeds off of that,” coach DeCesare said. “And the way he shoots the ball – he shoots it as well as anyone in the program. So, when he has that space, like he did in the first half, he can really knock them down.

“But we’re playing nine or 10 guys, trying to stay fresh, and, in the second half, we want to ride the group down the stretch that plays the best. So, Pat (McQuaide) was playing really well late, and we just kept going to him. He’s a football guy who just sticks his nose in and competes, and we’re a team that needs more of that.”

Overall, Solon was plus-seven in the rebounding department and shot 54.9 percent from the field, while the Mustangs shot 41.2 percent.

Up next, Solon will travel to take GCC foe Euclid at 7:30 p.m. Friday.