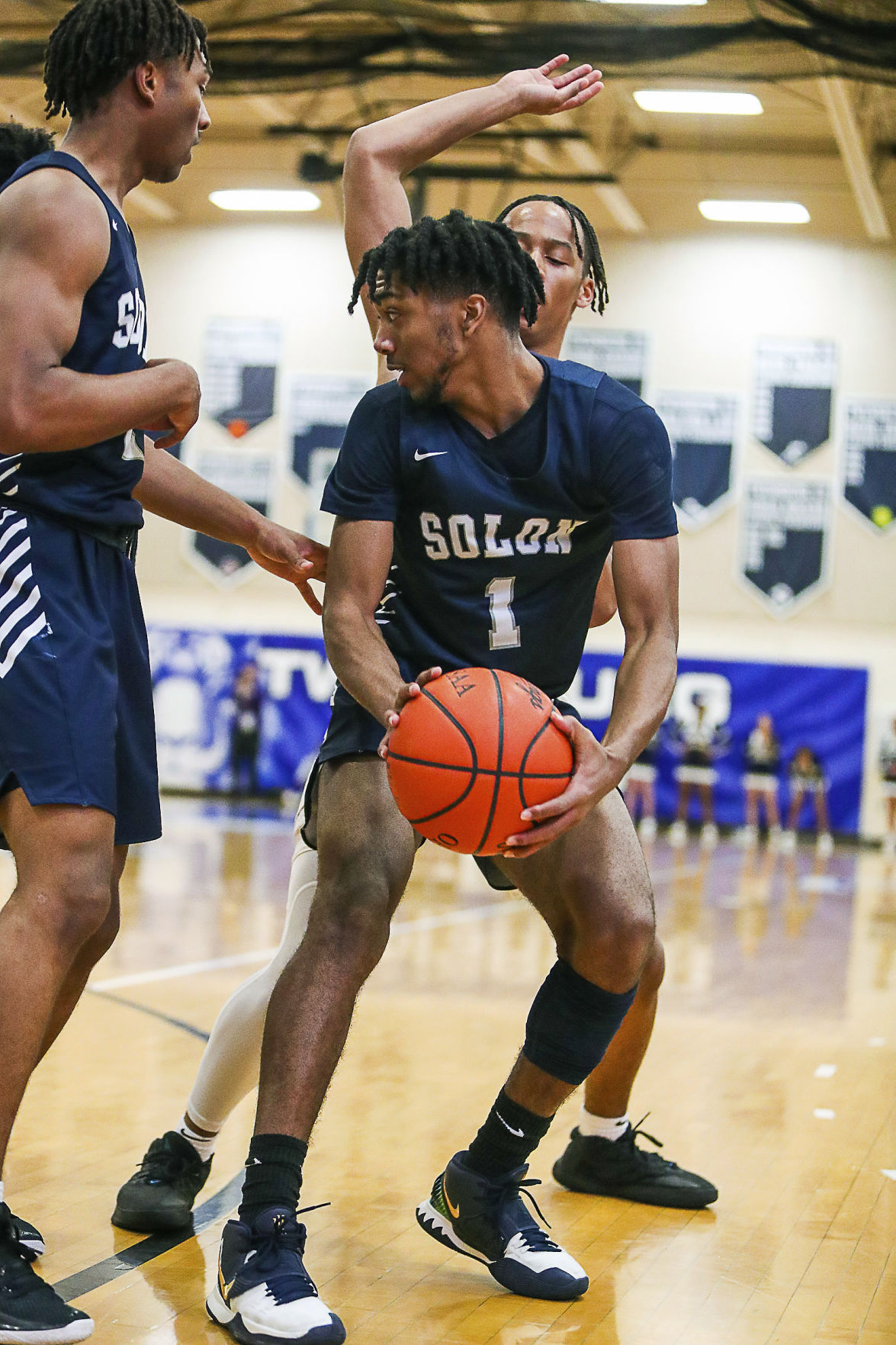 Solon 6-foot-3 senior Brandon Chambers shields off a Shaker Heights defender during the Comets’ 66-48 loss in the Division I district championship game on Saturday in Twinsburg. 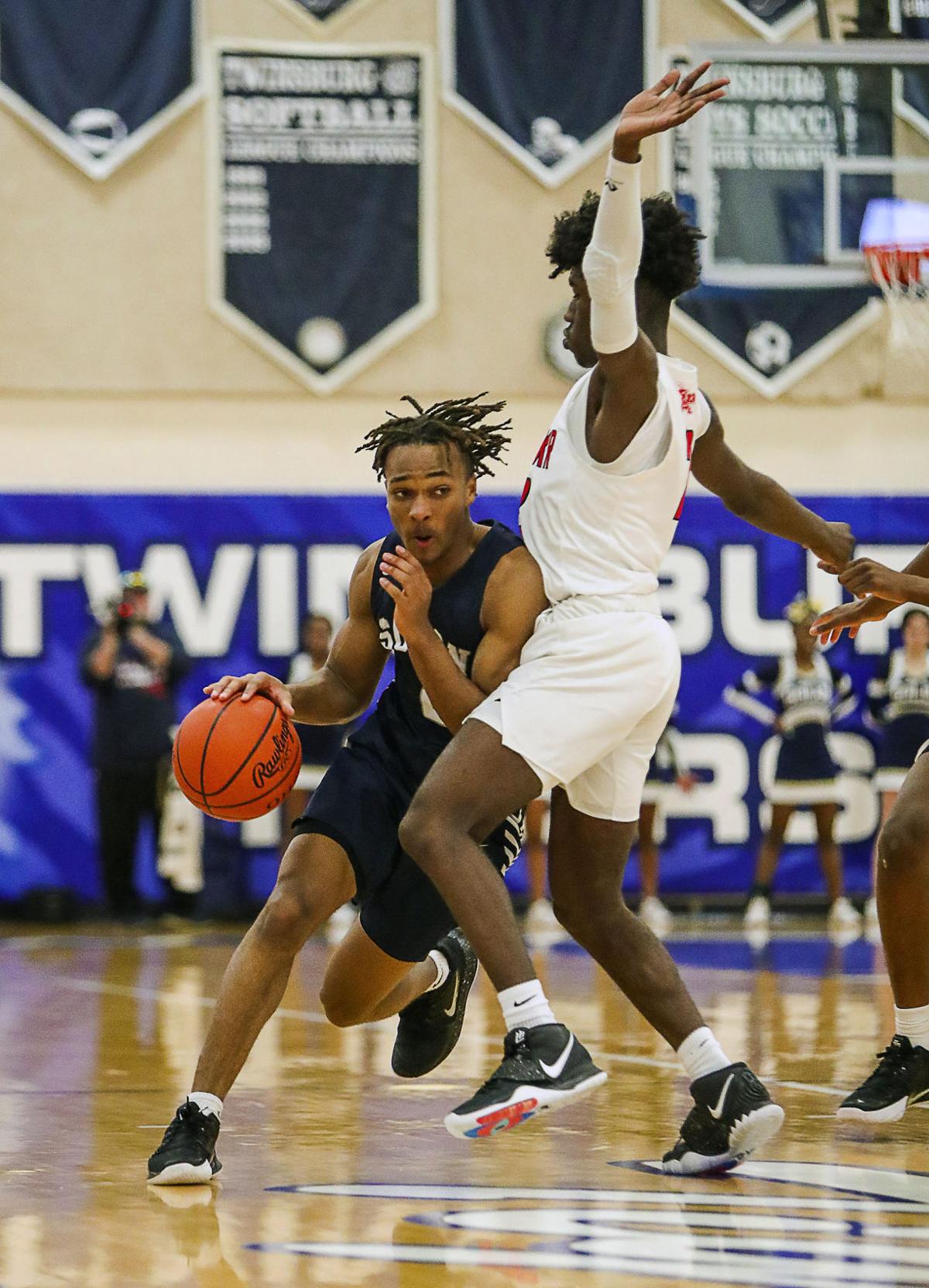 Solon junior Marcus Steele (left) gets a step on Shaker Heights sophomore Danny Young during the Comets’ 66-48 loss in the Division I district championship game on Saturday in Twinsburg. 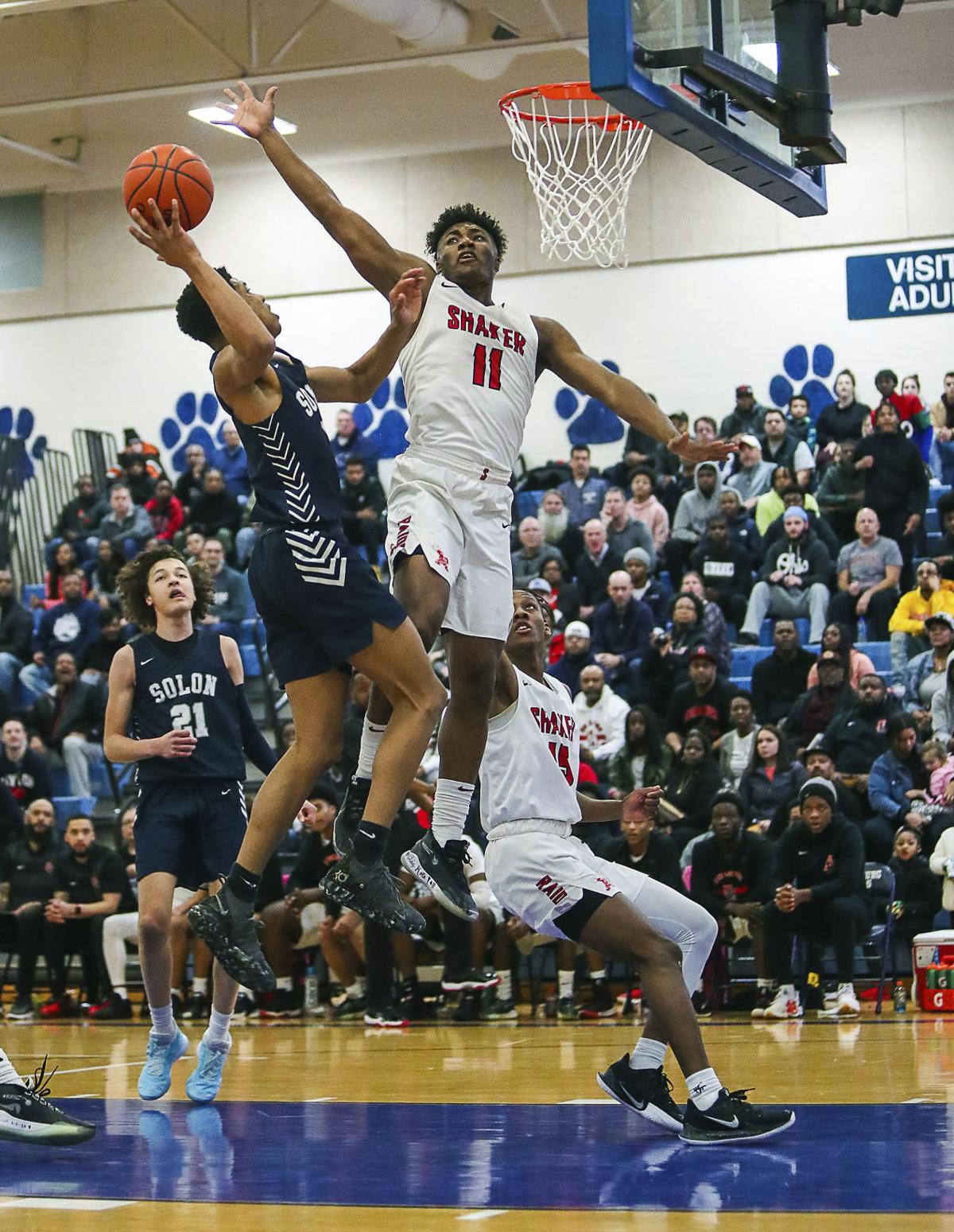 Solon 6-foot junior Jimmie Williams flies to the rim against the block attempt of Shaker Heights 6-foot-3 senior Dakota Cochran during the Comets’ 66-48 loss in the Division I district championship game on Saturday in Twinsburg.

Solon 6-foot-3 senior Brandon Chambers shields off a Shaker Heights defender during the Comets’ 66-48 loss in the Division I district championship game on Saturday in Twinsburg.

Solon junior Marcus Steele (left) gets a step on Shaker Heights sophomore Danny Young during the Comets’ 66-48 loss in the Division I district championship game on Saturday in Twinsburg.

Solon 6-foot junior Jimmie Williams flies to the rim against the block attempt of Shaker Heights 6-foot-3 senior Dakota Cochran during the Comets’ 66-48 loss in the Division I district championship game on Saturday in Twinsburg.

If the Solon boys fell behind by more than a few possessions, then their game plan would be out the window during their Division I boys basketball district championship game against Shaker Heights on Saturday afternoon in Twinsburg.

But Solon lost both of its regular-season battles in Greater Cleveland Conference play against district favorite Shaker Heights (20-5), including an 80-59 road thumping on Dec. 6 and 60-49 home affair on Jan. 28.

To come out on the winning end in the district title game, Solon sixth-year head coach Tony DeCesare said, the Comets would have to slow the pace and not let Shaker Heights’ athleticism take over in transition.

“I think the first quarter was 10-9, and we really wanted to keep the game under 50 (points),” DeCesare said. “We were on track for that, and, even at 18-17 (late in the second quarter), it was trending in our direction. But Shaker is so talented, and they’re able to really make you pay for mistakes.”

Shaker ended the half on a nine-point run to take command of a 26-18 lead at intermission.

“I think our guys played really well in the area we usually do defensively, but I thought the game got away from us in the last two minutes of the first half,” DeCesare said, “It was really just a couple turnovers and a couple of uncharacteristic mistakes on our part that kind of allowed them to get that lead and get comfortable.

Solon maintained the pace it wanted throughout the third quarter, but trading buckets wasn’t going to cut it with a 39-30 deficit heading into the final stanza.

“Once we got behind, we had to take a few chances that we didn’t want to,” DeCesare said. “We had to extend a little bit in terms of pressure in the second half, especially in the fourth quarter. That’s not how you beat a team like that, but we were forced to, because the clock was ticking down, and we had to start to make plays.”

Shaker Heights ended up outscoring Solon, 27-18, in the fourth.

“So, getting down came back to bite us,” DeCesare said. “But I give our guys credit. They played it out, they really competed, and they hung in with a really good basketball team. While we thought it was a game we could win, we lost three games to them throughout the year. So, the better team won, but I was proud of our guys for the way they played and getting to that point.”

Per usual, GCC boys hoops has been well-represented in the postseason with Mentor (19-7) and Medina (20-5) joining Shaker Heights with district titles.

“I think our conference is as good as there is in the state for boys basketball,” DeCesare said. “And, unlike other conferences, we’re spread out into different districts and get the opportunity to qualify a lot of teams to regionals, but you still have to win games. And Mentor, Shaker and Medina were all one seeds.

“So, playing that kind of schedule, where you’re getting two games against each one of those teams, really prepares you for the postseason to go up against multiple good opponents in consecutive games. Being in the league has really helped each program improve each year.”

Graduating four starters and four key reserves from last season’s 17-6 campaign that ended in a 60-58 district semifinal loss to Mentor, Solon boys basketball flew under the radar coming into this campaign, with the exception of junior returning starter Marcus Steele.

But recording 18 wins with a district title game appearance, Solon’s talented junior class made a name for itself, notably with Dylan Vauss’ defensive know-how as well as Jimmie Williams taking over a lead offensive role in the latter half of the season. He finished with a team-high 20 points, including three treys, against Shaker Heights.

“I think Jimmie really progressed nicely throughout the course of the year and continued to get better,” DeCesare said. “Especially on the offensive end, he became a guy that just about in any game could get us baskets and especially baskets in big moments.

“I think the key for Jimmie is to have that same type of growth in the offense that he had during the season. And, if he does, he should be one of the best returning players in the conference next year.”

While Solon has a junior-laden squad, seniors Brandon Chambers and Chad Marks still left their stamps on the program.

After nursing injuries in the Comets’ playoff opener against Bedford, Chambers and Marks returned to the floor in Solon’s district semifinal against Garfield Heights and title game against Shaker Heights.

“Both of them were not at full strength after those injuries, and you could see it after the game,” DeCesare said, “They both were in a lot of pain, and I told them how proud I was that they were willing to really go out and sacrifice for the team and give us whatever they could.

“And I think it’s a testament to the kind of kids those guys are and the families they come from that, even though they were starters for an entire season, to come back and just play in any role they could to try and help us these last two games, it was a testament to their character.”