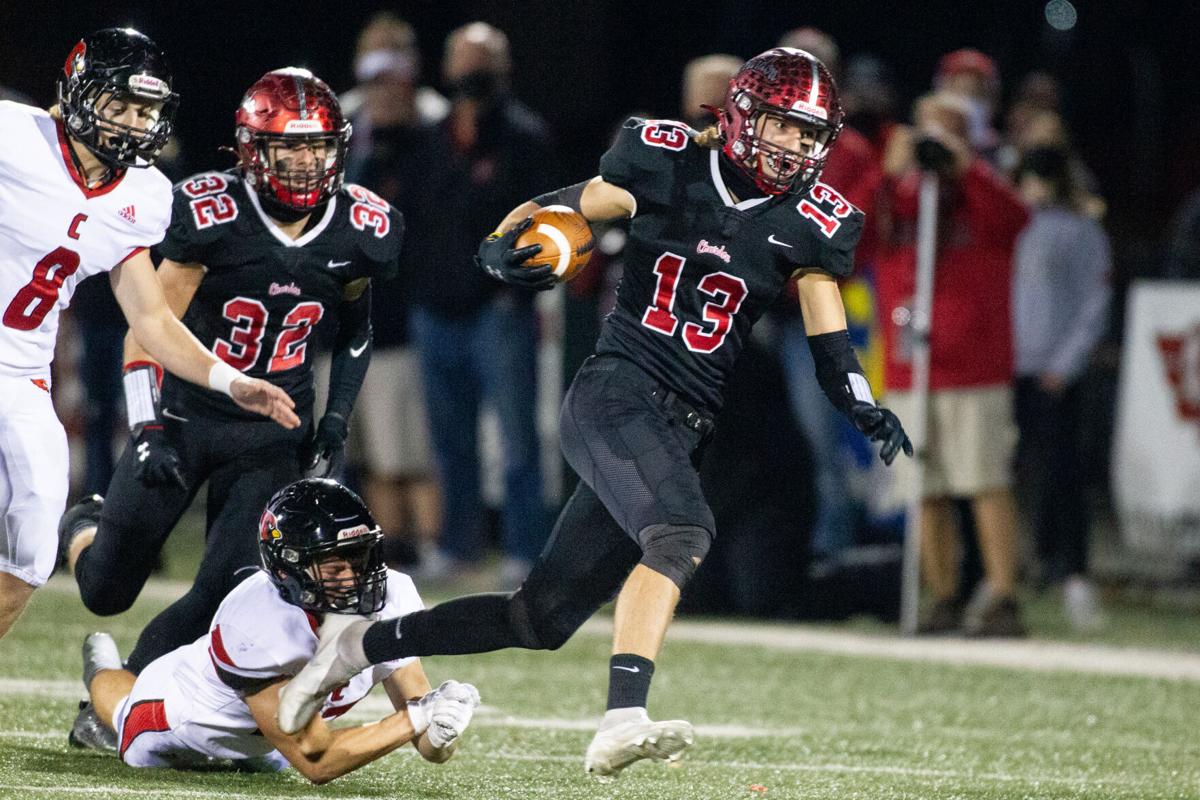 Chardon 6-foot-4 receiver Nathanael Sulka (right) eludes a Canfield tackler thanks to the initial block by senior teammate Evan Ash (No. 32) on the first play of the Hilltoppers’ 38-6 home victory to claim the Region 9 title on Friday night at Memorial Field. 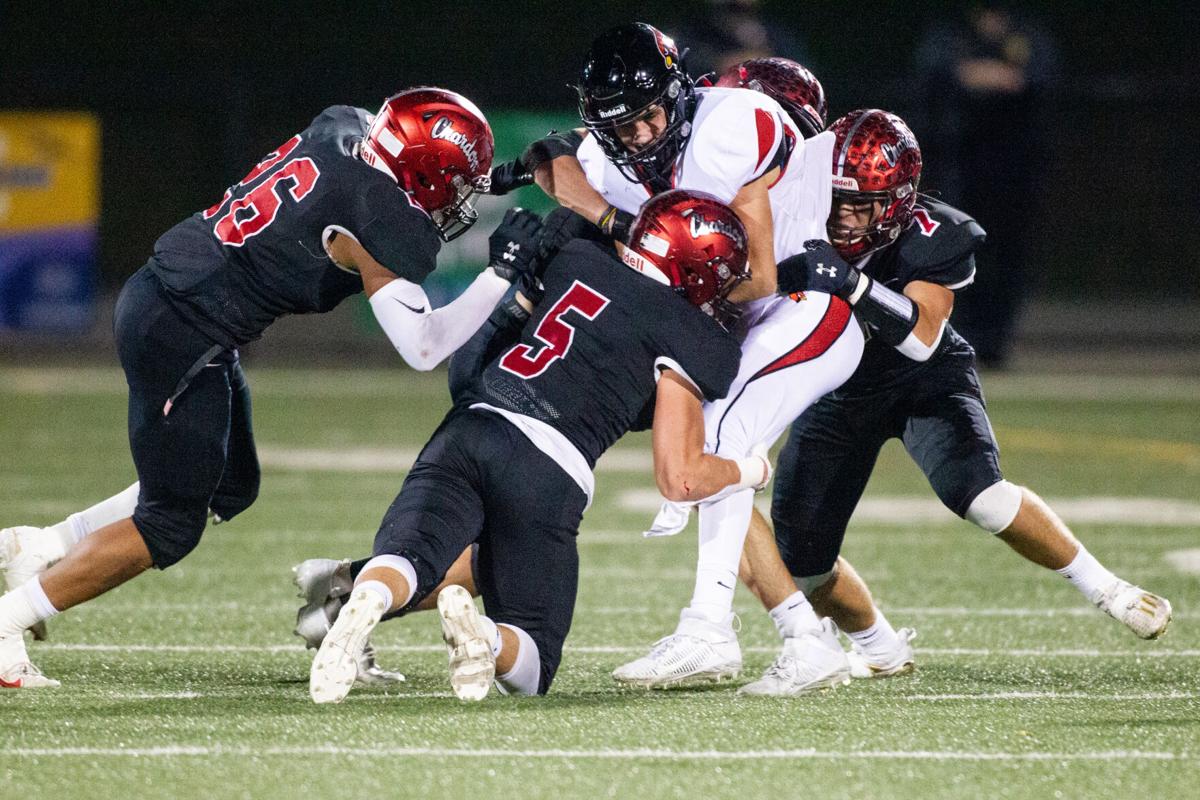 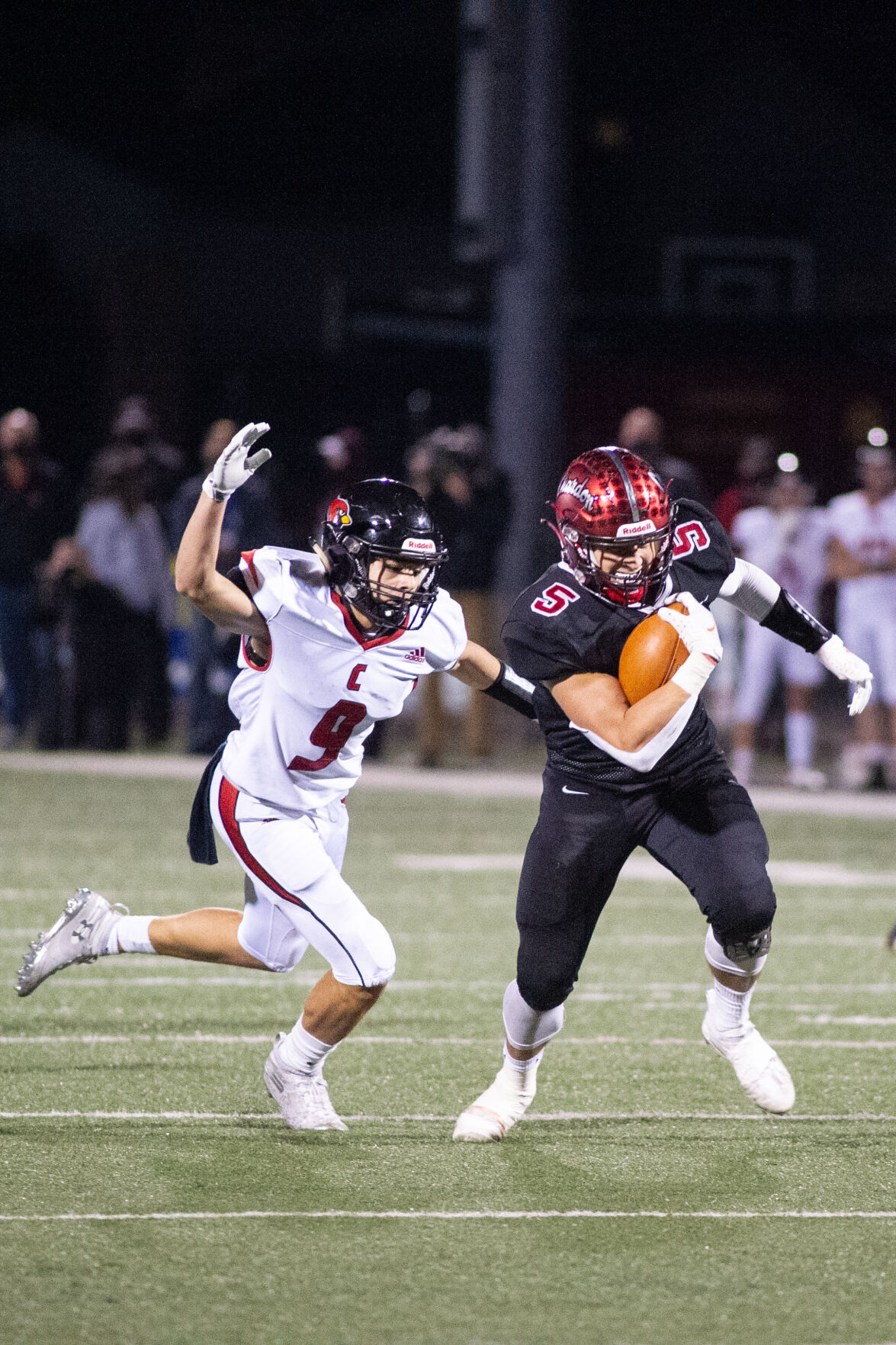 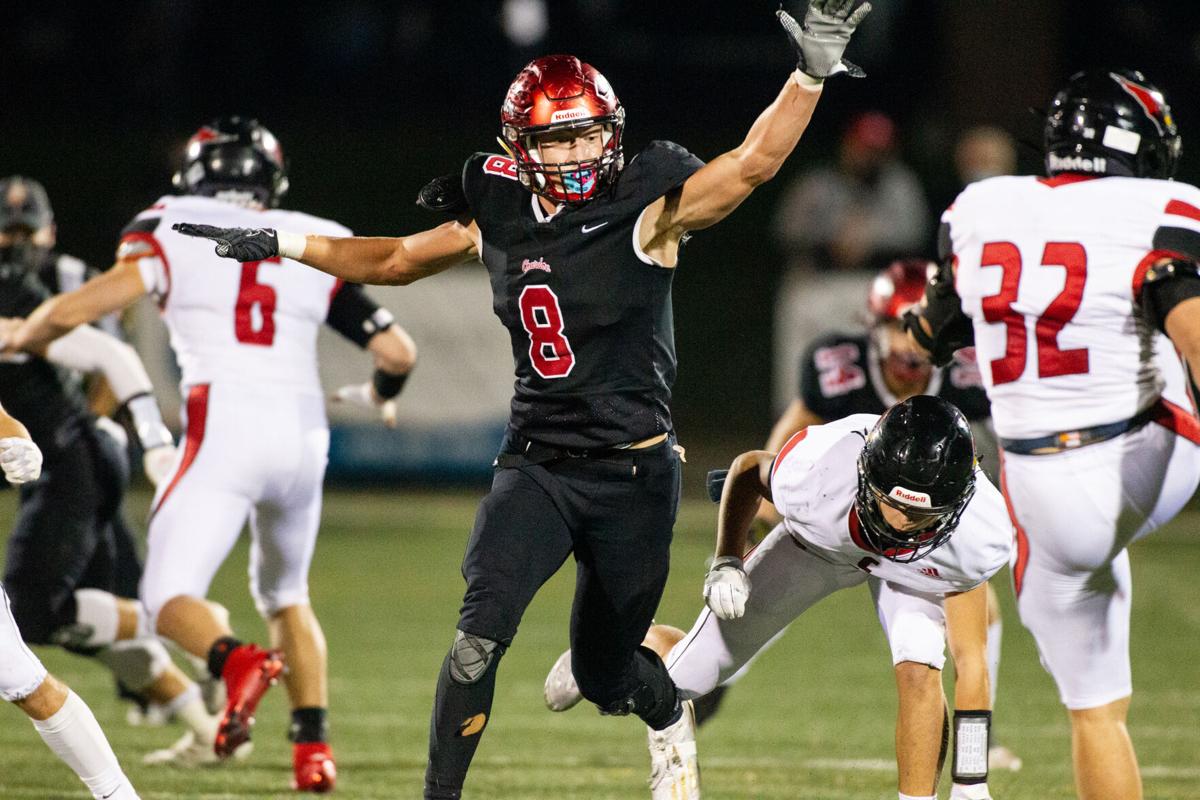 Chardon 6-foot-4 receiver Nathanael Sulka (right) eludes a Canfield tackler thanks to the initial block by senior teammate Evan Ash (No. 32) on the first play of the Hilltoppers’ 38-6 home victory to claim the Region 9 title on Friday night at Memorial Field.

The score easily could have been 7-7 at halftime. But if hanging with Chardon were easy, then everyone would do it. So far, no one has.

Instead, the AP No. 1-ranked Hilltoppers (10-0) caused three turnovers to take a 24-0 halftime lead on AP No. 3-ranked Canfield (9-1), before knocking off the Cardinals by a 38-6 final in the Division III, Region 9 championship game Friday night at Memorial Field.

That victory leaves the Chardon gridders the lone unbeaten team remaining in Division III and has them dancing to the final four for the first time since 2003, when then-senior linebacker Matt Smith headlined an 11-3 campaign.

“You’re bringing so much joy and happiness to the community, all those fans, your parents,” he said. “But, most importantly, the work that you’ve put in, you’ve overcome so many things. It’s unbelievable what you’ve accomplished, and yet the journey’s not done. But your story, fellas, is going to be told. It’s going to be told by everyone standing here, of what you have overcome to get to this point. You have something to be proud of. I’m grateful. I hope you are.”

Since 2012, the Chardon boys have successfully defended “The Hill” 48 times in 54 home games. One of those six losses came during a regular-season affair against Canfield in 2017.

When the unbeaten 2020 Cardinals came to town on Friday, riding high on a 24-6 victory against AP No. 6-ranked Streetsboro (8-1) the previous week, it didn’t take long for Chardon to take the driver’s seat in the regional championship.

With everyone expecting Chardon’s wing-T to run the pigskin, 6-foot-1 senior quarterback Drew Fetchik snapped the first play of the game and tossed a quick one out wide to 6-foot-4 junior split end Nathanael Sulka, who ripped off 52 yards down the left sideline to set up the Hilltoppers at the 13-yard line.

“They just weren’t expecting it, because normally we run up the middle to start the game,” Sulka said. “So, we changed it up, and it was open to set up that first touchdown.”

That was just one of two completions Fetchik would need to make all night, as the Hilltoppers brought about violence in the trenches to capitalize on their run game, especially coming through with points off of turnovers.

First, Chardon finished off that opening drive courtesy of a 1-yard touchdown run by 170-pound senior running back James Pettyjohn for a 7-0 lead just 82 seconds into the game. It was a four-play, 65-yard series.

“That’s what’s nice about our offense, is we have the aspect of passing this year,” Chardon 6-foot, 260-pound senior offensive guard Nick Fay said.

“So, it really lets us spread the defense out if we need to,” he said. “But we take a lot of pride in running the football. That’s the No. 1 thing for Chardon. That’s what we work on in practice. We’ve been doing it since August. It’s all been preparing up for this moment.”

Three plays after that, Chardon 185-pound senior running back Evan Ash found the end zone on a 1-yard carry for a 14-0 upper hand just three minutes into play.

“Critical plays,” coach Hewitt said. “I mean, we’ve got big-time players making big-time plays in big-time games. That’s ultimately why we’re one of the four teams left still standing. It’s a testament to the talent we have out there. You know, we’ve got really good football players.”

After trading punts, Canfield finally gained some momentum on a trip to the red zone early in the second quarter, in large part due to 6-foot-2, 185-pound sophomore quarterback Broc Lowry completing a 12-yard toss on third-and-long and then a 28-yard completion while under pressure.

But that red-zone opportunity was short-lived when Lowry called his own number and coughed up a forward fumble. Chardon safety Sulka scooped up the loose leather and returned it 90 yards to the crib for a 21-0 Hilltopper lead with 8:51 to go in the half.

The poor Canfield faithful, who made the hour-plus trip from Mahoning County, went mute in a hurry.

“I think I’ve got to get faster,” said Sulka, when asked if that scoop-and-score showcased enough speed to rival the likes of teammates Pettyjohn and senior linebacker Blake Barker.

“I just always give it my all, like non-stop effort running as hard as I could,” he said. “I saw the end zone and decided I had to get there.”

Later in that second quarter, Canfield sustained another drive that had the Cardinals set up with a first down on a 22-yard field, but Sulka came up with yet another turnover, this time intercepting a Lowry pass and returning it 32 yards before getting tackled at midfield with 38 seconds left in the half.

Pettyjohn, who finished with 17 carries for 125 yards, went back into action with a 44-yard pickup on a jet, thanks to some brilliant blocking down the left sideline.

On third down with seven seconds left, Chardon gave junior kicker Nathan Tager the nod for a 24-yard field goal and a 24-0 Hilltopper lead at the break, with 17 of those 24 points coming off turnovers.

“Coach (Brian) Landies just puts me in the right position,” Sulka said of his pick. “I just drove on the end-breaking route, and the ball was just thrown right to me. It was nothing special.”

While Sulka was the man of the night in the first half – with a 52-yard reception, a 90-yard fumble return and an interception – his shoulder popped out of its socket on the first play of the third quarter. He exited for the night.

Canfield capitalized on a nine-play, 64-yard drive that concluded with Lowry’s 2-yard keeper to cut the deficit, 24-6. A two-point conversion attempt went incomplete with 7:36 left in the frame.

Chardon’s Barker returned the ensuing kickoff 94 yards to the house only for it to be called back on a holding penalty. Instead, the Hilltoppers orchestrated a 13-play, 90-yard answer that concluded with Fetchik’s 3-yard keeper to the left pylon for a 31-6 command with 32 seconds remaining in the quarter.

Fetchik mixed up that drive with handoffs to Pettyjohn, Ash and 190-pound junior fullback Sean Carr, along with a 6-yard toss to senior Angelo Ferrante, to keep the chain gang shedding those calories.

“It was an incredible drive,” Hewitt said. “You know, we were reeling a little bit. We got punched, and we lost a warrior, and that does something to the psyche. And our kids put together a 90-yard drive when we needed it most. Again, it says a lot about how much our kids believe in what we do. They executed at a high level.”

Chardon’s defense went on to force a three-and-out punt that Canfield’s kicker shanked out of bounds to net just 18 yards – gift-wrapping the Hilltoppers’ offense a 35-yard field to work with.

Six plays later, Pettyjohn hammered in another 1-yard touchdown to enact a running clock with 7:42 remaining for the eventual 38-6 final.

“It’s huge, but it doesn’t happen tonight,” lineman Fay said about the running-clock victory. “It happens in the first four days of the week. We knew we prepared really hard. We’re very physical during practice so we’re ready for games like this. It’s just awesome to have it happen in a year like this, in 2020, where not everything is going your way, but just to bring joy back to the city is really nice.”

Up next, Chardon advances to play the Tiffin Columbian Tornadoes (9-1) in the Division III state semifinals at 7 p.m. Friday at Brunswick High School’s Auto Mart Stadium.