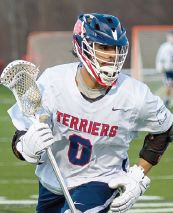 Hunter Jenkins, a 2016 Solon graduate, was named a U.S. Intercollegiate Lacrosse Association scholar all-American on Friday, after starting four years as an attackman for the Hiram College men’s lacrosse program.

Hunter Jenkins knew he didn’t want to gamble with his playing time in college lacrosse, as the 2016 Solon graduate went on to start all four years with the Division III Terriers at Hiram.

The 6-foot-2, 200-pound attackman didn’t roll the dice in the classroom either, graduating with a 3.6 cumulative GPA this spring. He finished his undergraduate studies with a double major in biology and political science.

Excelling on the field and in the classroom, Jenkins was named a U.S. Intercollegiate Lacrosse Association scholar all-American on Friday. He is the first player in Hiram men’s lacrosse program history to earn the USILA honor.

“It means a lot to me,” he said. “I spent a ridiculous amount of time every day for the past four years working in the classroom and working out of the classroom, while also making sure I’m mentally and physically prepared for practice every day and for games.

“Yeah, I’m the first one in program history. The program’s only, I believe it’s 10 years old now, and I would hope there’s more to come in the future. But it really does mean a lot to me. I was really happy and thankful to be named for this honor.”

Only playing five games this spring in a coronavirus-shortened season, Jenkins tallied 13 goals, 13 assists and 30 ground balls to lead the Terriers to a 4-1 record, including a come-from-behind victory, 9-8, against La Roche University, of Pittsburgh. Jenkins buried the 8-8 equalizer during a man-up opportunity with 4:29 remaining in that game.

During his four years as a Terrier, Jenkins appeared and started in all but four games. Although his senior season was cut short, he graduated ranked second in his program with 63 assists, third with 142 points and fourth with 79 goals in his career.

“It was terrible the season had to end early,” he said. “As an individual, I felt extra ready for this year. I don’t know if it’s because it’s my senior year, but I had seen everything the past three years and knew what was going to come at me this year.

“As a team, we had a really strong senior class that we had been grooming for the past three years, and we were just really looking to get after it.”

During his time at Solon, Jenkins played among some phenomenal talents in the classes ahead of him. When he was a freshman in 2013, under former Solon coach Don Gries, the Comets lost a 17-16 nail biter against state power Hudson in the Ohio High School Lacrosse Association Division I Northeast Region semifinals.

And in 2014, the Solon laxers went 16-2 with a 15-9 loss against Hudson in the Division I region championships.

As a junior, Jenkins earned a spot in the starting attack rotation – with Solon’s roster featuring six players committed to college careers – but Jenkins tore his patellar tendon, from his kneecap to his shin bone, and had to sit out the majority of 15-3 campaign that ended in a regional final battle against Upper Arlington.

That’s when Jenkins knew he didn’t want to gamble his playing time in college.

“A big part of me choosing Hiram was the fact that you never know what’s going to happen, so you’ve got to make every moment count while you can,” he said. “And I didn’t want to go to a school where I’d potentially be on the bench for a couple years and then try to do great my last two years or something. Who knows, maybe I’ll get hurt or maybe coronavirus happens and I end up only playing five games one season. You never really know.”

After an all-conference and all-region senior campaign at Solon, Jenkins had plenty of options for college lacrosse, including schools up in New England. When he chose Hiram, he also chose his dad, head coach Brian Jenkins, who fathered the Terriers lacrosse program in 2011.

“My dad’s whole thing was that he had been trying to keep his hand out of my recruiting process as much as possible,” Jenkins said. “And it was the first time he ever actually coached me, because he always did a good job of just letting whoever my coach was at the time being my coach. And I loved playing for my dad. I had a great time playing with him.”

As a freshman at Hiram, Jenkins led the Terriers with 38 total points and broke single-game program records with seven goals and 10 points during a double-overtime loss, 17-16, against Franciscan University.

Jenkins went off for two goals and two assists in the fourth quarter of that game, when the Terriers went on a six-goal spree. But Jenkins said he always took more pride in his assists as an attackman.

“You’re relying on that other guy to finish it after you make that pass, but I had a great group of guys to play with, especially Tim Stucky,” Jenkins said of a fellow senior attackman who finished with a program record of 115 career goals. “So, I had a ton of opportunities to get my assists to him, just beating a man, drawing a slide and hoping to get it to him.”

Jenkins was an honorable mention all-North Coast Athletic Conference selection his freshman year. As a sophomore, he set a single-season program mark of 25 assists.

And then he was on fire with 13 assists and 13 goals just one-third of the way through his senior campaign. But that was the whole reason he chose Hiram, to get his playing time early in case something unforeseeable happened his senior year.

“I’m so happy and fortunate that I chose Hiram from the beginning,” he said. “It’s a tremendous school. I’ve learned a ridiculous amount. I had a ton of professors supporting me the whole way, which allowed me to keep my GPA so high and learn so much. And ultimately being able to play while doing that at a high level allowed me to get this award.”

Jenkins is currently exploring the possibility of paralegal work with an interest in environmental law. If he decides to pursue a graduate degree in social work or even attend law school, he hasn’t ruled out playing the final year of his NCAA eligibility for lacrosse.

If he doesn’t, he said he hopes to stay connected to the sport.

“There’s no way I think I’d ever leave this sport,” Jenkins said. “One way or another, I’ll coach or hopefully have kids one day who play. There will always be something.”