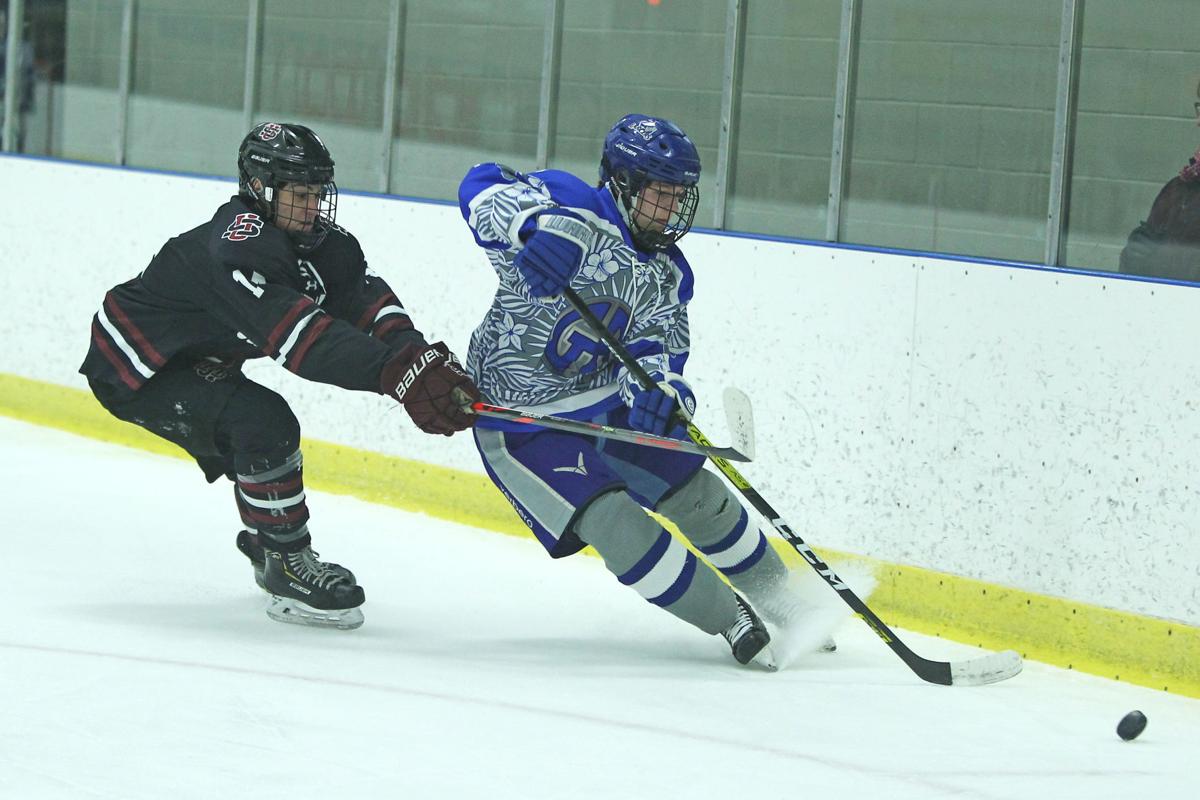 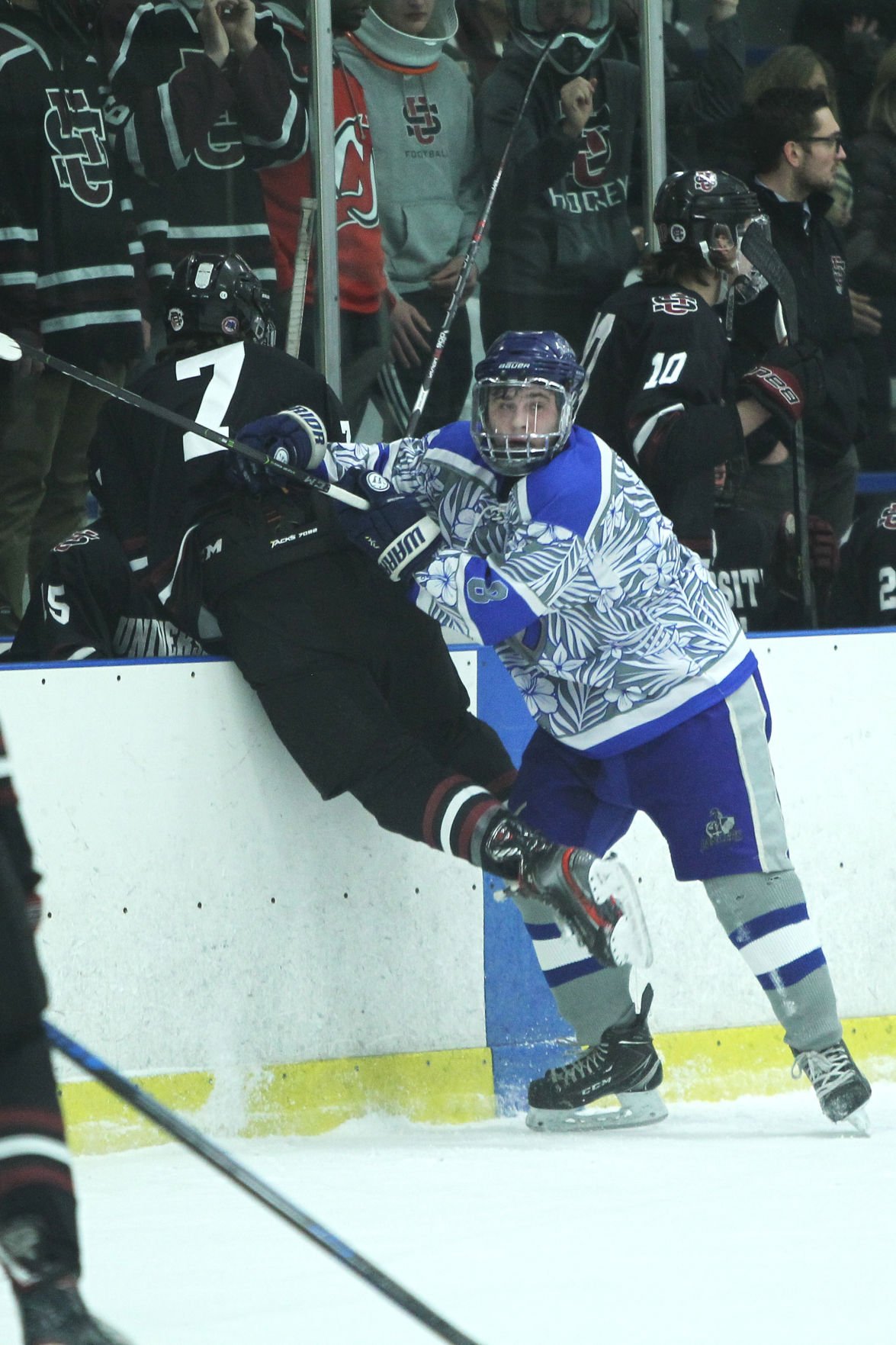 The Gilmour Academy Icemen were hounding University School senior goalie Michael Holtz with 15 shots on cage, but nothing was going in during the first period of a district semifinal collision on Saturday night in Kent.

The district favorites and state No. 3-ranked Ice Lancers (29-7-1) had already gotten the best of archrival University in the regular season, including a 3-0 home victory in December and a 4-1 road win in early February.

But Gilmour was trying to knock off the No. 4-seed Preppers (14-18-1) for the first time in nine previous tries during district playoff action. Not to mention, the US Icemen entered the game as the five-time defending district champions.

Like so many times before, it appeared as if a US goalie was going to stand on his head against Gilmour’s postseason peppering.

Lancer sophomore defenseman Vince Stafford, however, would provide electricity to the lamp on a hat-trick performance from the point, finding the Achilles heel of University’s district reign in an eventual 5-1 victory for Gilmour.

“It feels good,” Stafford said. “Doing it for my seniors, doing it for the alumni, doing it for our coaches, just getting the win, it was good for the program and for our rivalry with those guys. The whole year we’ve been working hard, and I feel like it all just led to this moment.”

A year ago, Gilmour owned the top seed in the district and University was the No. 3 seed, but the Preppers managed to pull off a 2-1 overtime victory in the title game behind former US netminder Critter Coughlin’s 28 saves against 29 shots faced.

So, when current US goalie Holtz rejected the first 15 shots Gilmour fired on him during Saturday’s district semifinal, maybe the Lancers’ playoff curse against their rival was bound to continue.

“(Stafford) scored the first goal, which was a big goal for us,” Gilmour 15th-year head coach John Malloy said. “It was late, late in the first period, and their goalie had been playing super well. I think, up until that point we had 15, 16 shots on him, and he stopped everything.

“It sort of got me thinking a little bit about the past games, where we’ve attacked the US goalie well in the districts and just came up short. So, I thought that goal – that first goal – was huge. And for (Stafford), he’s got to have one of the best shots in the league. When he hits the net, he’s very dangerous, and his shots were hitting the net.”

After Holtz stopped the first 15 shots he faced, Gilmour’s Stafford triggered a hard snapper on the ice from the point with junior forward Luke Robertson screening the cage for a 1-0 tally with 21 seconds to go in the first period.

Gilmour junior netminder Toby Herlong, meanwhile, saved all five shots he faced in the opening stanza. With a plus-11 advantage in shots on goal, Gilmour would have been back to square one had Stafford not opened the gates in the final minute of the frame.

“As our coach has been telling us all year, you know, offense is kind of like an alley cat; it comes, and it goes,” Stafford said. “So, we had a lot of shots. But, when the first one went in, it kind of put momentum toward us going into the ice cut.

“And then it showed in the second period, when we put in those three goals in that two-minute stretch.”

Between 9:40 to play and 8:06 to play in the second period, the Ice Lancers went on a three-goal spree to take command of a 4-0 upper hand.

Stafford ignited the sequence on a power-play snap shot from the top of the circle, off an assist from junior forward Charlie Tuggey, for the two-goal lead.

“Charlie passed it up to me, a great pass, and I just skated in a little to try to take away some of the space the goalie had,” Stafford said. “And I just fired it with Joe (Roddy) and Charlie in front of the net, and I think Frankie (Valenti) too – just great screening by them, and then a quick, hard shot.”

And 54 seconds after that, Robertson blasted one home from the slot.

“That was a big goal,” coach Malloy said. “I thought that put it away, just because of the way we were playing. I just didn’t see them being able to score four goals to beat us at that point. So, even though it was 4-0 with over eight minutes to go in the second period, we were feeling pretty confident.”

With a netminder like Herlong between the pipes, the Lancers had every right to be cocksure behind a four-goal lead. Herlong finished the regular season with a 94.7 save percentage, splitting time in cage with fellow junior goalie Dylan Stefan, who had a 92.7 save percentage.

The advantage remained 4-0 at the second intermission, and the Lancers were gifted with a five-minute power play to open the third period off a major penalty accessed to University as time expired in the middle frame.

But the Lancers were unable to add to their lead during that five-minute advantage.

“We came out, and we just made a lot of unforced errors on the power play, and then our second group out had a mixed unit for some reason,” Malloy said. “We just made a mistake from the bench side. And then, since it was five minutes, we wanted to get some other guys out there too. So, we put out a non-power-play unit. Then we tried to go back to a power-play unit, and it didn’t go as well either.

“So, it was pretty much a wasted power play. But, again, with a 4-0 lead, I knew that they were going to be pressing. And, so, I told our players that we’d keep a forward high and keep our defense from stepping down, which we normally wouldn’t do on a power play. We just weren’t taking any chances (of giving up a shorty).”

University finally disrupted Herlong’s shutout with 1:39 to play, when Beau O’Sickey finished off an apple from fellow senior forward Andrew Rozenshtraukh to cut the Preppers’ deficit, 4-1.

But Gilmour’s Stafford answered right back on his hat-trick goal with 1:12 remaining for the 5-1 final.

“I was just trying to keep a defensive mindset with the 4-1 lead that we had,” Stafford said. “Our forwards were doing great, keeping the puck in the zone, getting it out to the defensemen. And then the puck just came out to me, and I just tried to get it on net, and it just ended up going top shelf.”

Up next, Gilmour will take on district No. 2-seed Mentor (33-2-1) – a 6-1 winner over No. 3-seed Shaker Heights in the other semifinal – in the title game at 7:30 p.m. Friday at Kent State. The Lancers are seeking their first frozen-four berth since 2011, while Mentor is after its first-ever state berth.