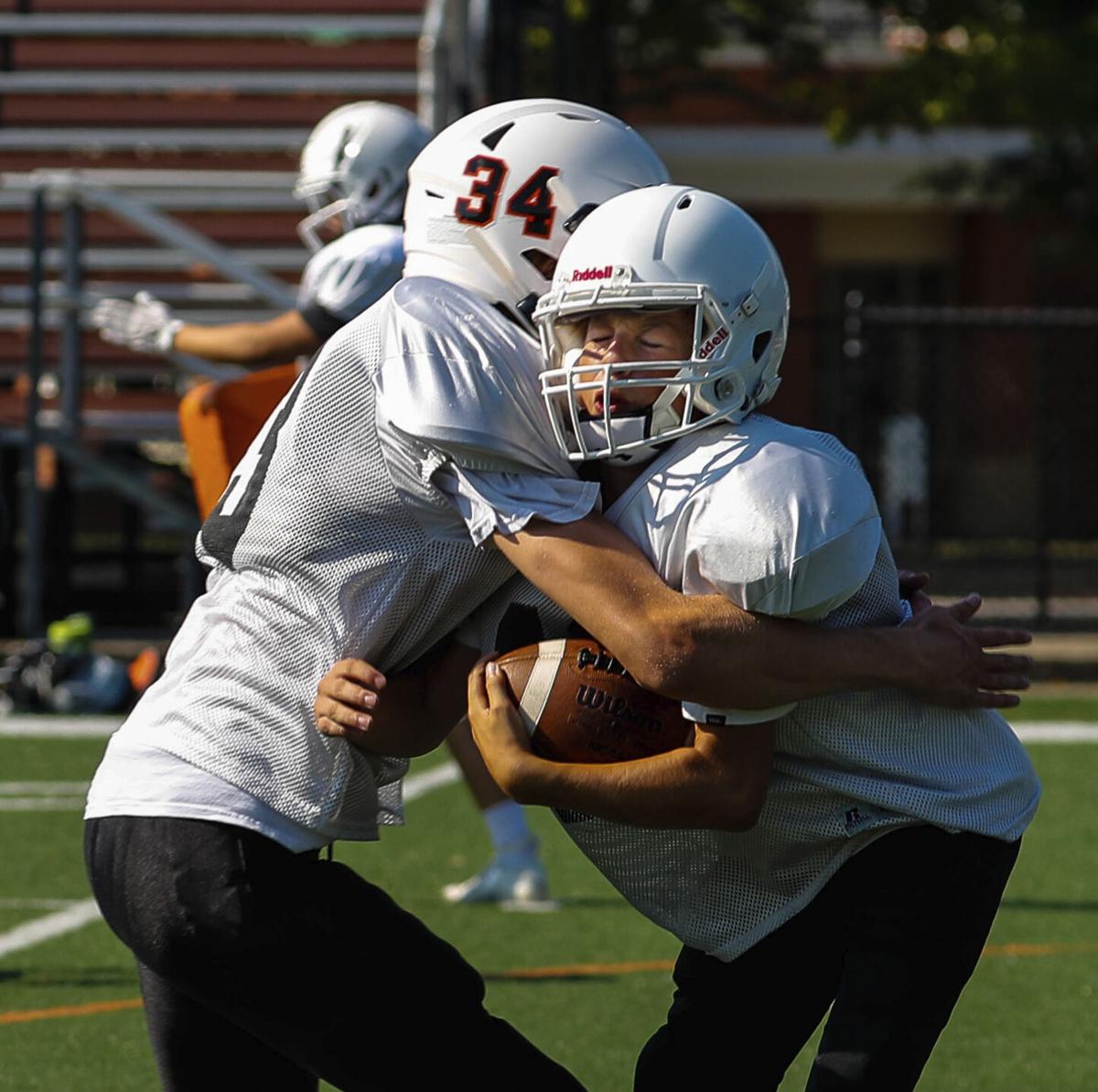 Chagrin Falls gridders move to light-contact drills during preseason practice earlier this month. The Tigers return on the heels of a 5-5 campaign under 26th-year head coach Mark Iammarino, who owns a 180-97 record at the helm. 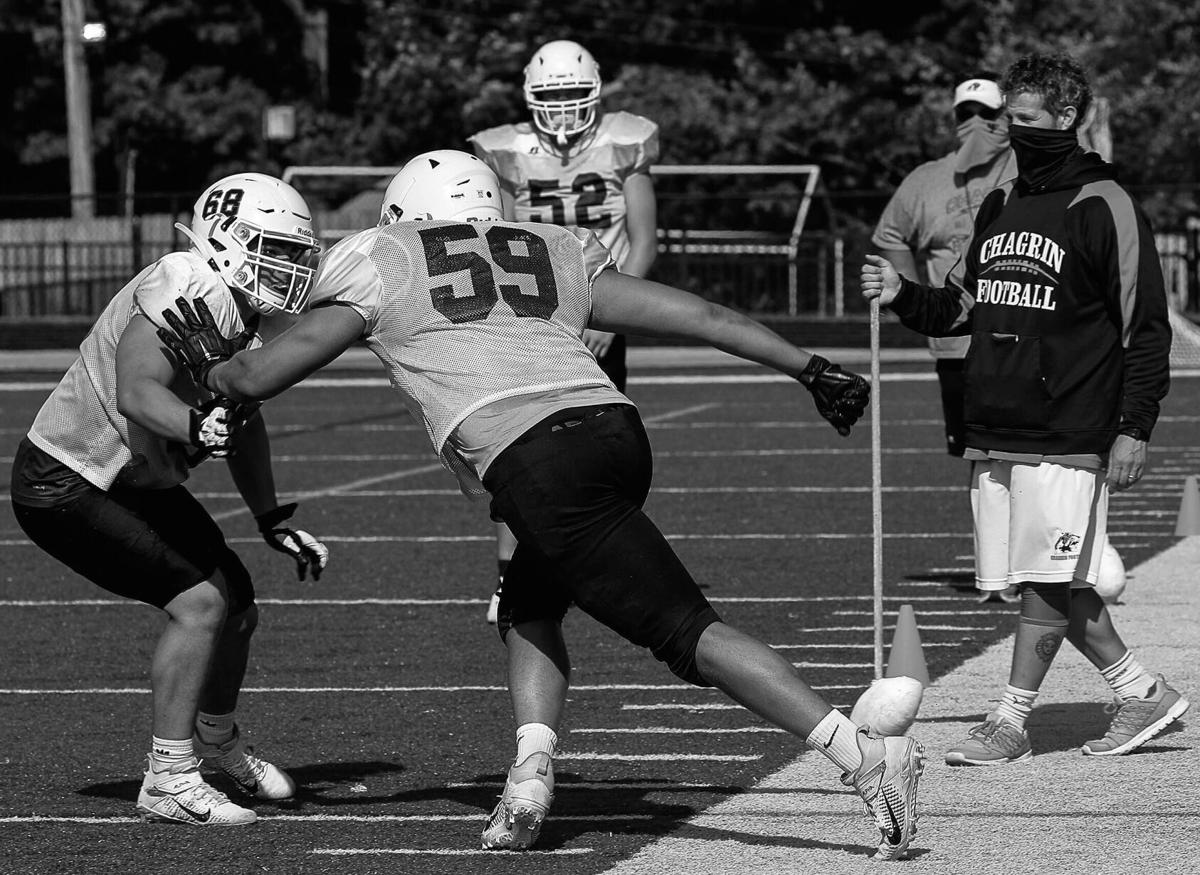 A pair of Chagrin Falls gridders lock horns during a preseason drill earlier this month at C.S. Harris Stadium. The Tigers return on the heels of a 5-5 campaign under 26th-year head coach Mark Iammarino, who owns a 180-97 record at the helm.

Chagrin Falls gridders move to light-contact drills during preseason practice earlier this month. The Tigers return on the heels of a 5-5 campaign under 26th-year head coach Mark Iammarino, who owns a 180-97 record at the helm.

A pair of Chagrin Falls gridders lock horns during a preseason drill earlier this month at C.S. Harris Stadium. The Tigers return on the heels of a 5-5 campaign under 26th-year head coach Mark Iammarino, who owns a 180-97 record at the helm.

When there’s 11 molehills on the gridiron, then a mountain can form.

That’s perhaps why many consider football the ultimate team sport, because the old phrase, “Don’t sweat the small stuff,” is pretty much obsolete in a game where one minor hiccup can cost so much.

This year at Chagrin Falls, where the Tigers are returning from a 5-5 campaign under 26th-year head coach Mark Iammarino, the small stuff literally is the sweat.

“We have kids wearing masks, social distancing, wiping their chairs when they’re done,” Iammarino said. “I mean, they’re conscientious about their hygiene and their behavior. And, whether it’s this specific pandemic or any other kind of life-threatening situation or health scare, they’re going to be more knowledgeable of that.”

Iammarino, who owns a 181-97 record at the helm, said football is always more than just the wins and losses, but following through with the protocols associated with the green light to this fall’s adjusted season has shown what the game really means to his players.

Like many other schools, the Tigers didn’t know their week-one opponent, or if they’d have a week one to play, when they returned to practice earlier this month. Gov. Mike DeWine didn’t announce the go-ahead for contact sports like football until Aug. 18.

“What would have been a shame is if they just simply said, ‘Hey, we can’t function in this environment, so we’re shutting it all down,’” Iammarino said. “The fact that they at least gave us the ability to establish protocols and follow those protocols, because, once again, you can’t shut life down. You’re going to have things that are thrown at you, and you’re going to have to work through them and deal with them.”

What the Tigers do know is that they’re returning a blue-ribbon quarterback in 6-foot-3, 230-pound senior Dawson Pierce, who completed 112 of 200 passes for 1,230 yards and 10 touchdowns last season, not to mention he had 102 carries for 323 yards with five touchdowns. And the dual-threat veteran has an experienced offense around him, including seven returning starters.

“It’s much more comfortable to have a quarterback that has started 15 games going into his senior year than trying somebody new in a short, fragmented summer,” Iammarino said. “So, he’s a good leader. He’s a big kid. He has a strong arm. And I think that plays a big part in what we hope to do.”

The Tigers did graduate a pair of starting receivers in Lucas Gaizutis, 315 yards, and Will Richmond, 201 yards, but they return 5-foot-11 senior Xavier Perez, who had 44 catches for 471 yards with eight touchdowns last year, and 5-foot-10 senior Will Tropp, who tallied 16 catches for 206 yards.

Although, Iammarino said the Tigers plan to utilize Perez primarily as a running back this season. A do-it-all playmaker, Perez also had 39 carries for 344 yards and seven touchdowns in 2019.

“It’s our way of assuring him touches, and that’s what we’re looking forward to,” Iammarino said. “Xavier has been a huge part of our offense the last two years. He’s very dynamic, and we expect him to play a big role this year, too.”

Also working out of the backfield will be 140-pound senior speedster Cam O’Connor, who had 34 carries for 135 yards last year, and 205-pound senior big rig Owen McClintock.

Joining Tropp in the receiving corps will be 5-foot-11 senior Owen Lewis, who missed last season with a knee injury, and 6-foot-2, 200-pound senior newcomer Josh Norton at tight end. Norton is a basketball standout for the Tigers who should also shine on the gridiron, even with his lack of experience, Iammarino said.

“We’re hoping our offensive line will be a strength of our team,” Iammarino said. “Dalessandro was a second-team all-Ohioan. He’s already received Division I offers. So, he could be a big-time player.”

Those guys were one-way linemen last year, but the Tigers have more pieces to the puzzle on defense, especially in trenches and secondary. Although, 6-foot, 220-pound senior defensive end Grady Zeigler returns with 15 tackles, including five for losses, and two sacks.

Chagrin will lean on inside linebacker McClintock as its backbone. McClintock tallied 81 tackles, five for losses, two sacks, four forced fumbles and a fumble recovery as a first-team all-Chagrin Valley Conference selection in 2019.

Also returning at inside linebacker is Pierce, who had 47 tackles, two sacks and a fumble recovery last year, while Norton, O’Connor, 170-pound senior Charlie McLaughlin and 180-pound sophomore Donny Hardy have been working at the two outside linebacker spots.

“We’ll adjust to what our opponents give us, but primarily we’ll have four down linemen and four linebackers and go from there,” Iammarino said. “But I’m envisioning the defensive front and possibly those outside linebackers being some sense of rotation.”

In the defensive backfield, Perez returns with 41 tackles, including four for losses, one interception and one fumble recovery from 2019, while Tropp and 5-foot-8 senior Miguel Demastus both had 19 tackles last year. Lewis and 5-foot-10 junior Cole Ettinger will also be in the starting mix with some sense of rotation among those five guys, Iammarino said.

And resuming kicking duties is 6-foot-4, 240-pound junior Andrew Kirkpatrick, who was a first-team all-CVC selection last season. He connected on 27 of 29 extra points and six of nine field goals for 45 points.

The Tigers will kick off their 2020 campaign by hosting league foe Painesville Harvey at 7 p.m. Friday at C.S. Harris Stadium.

“We told the kids today that we didn’t really get a chance to get into phase-three full contact until mid-week this past week,” Iammarino said Saturday. “So, that’s tough. There are a lot of things that we saw on film today, this morning, that you typically wouldn’t see this late in your summer preseason.

“So, we understand that. And we’re trying to emphasize executing the fundamentals of what we’re teaching the kids, and, really, it’s almost like a day-to-day thing. And that too could be a life lesson as well, that you’ve really got to focus on what your task is for the day instead of thinking two, three weeks down the road.”