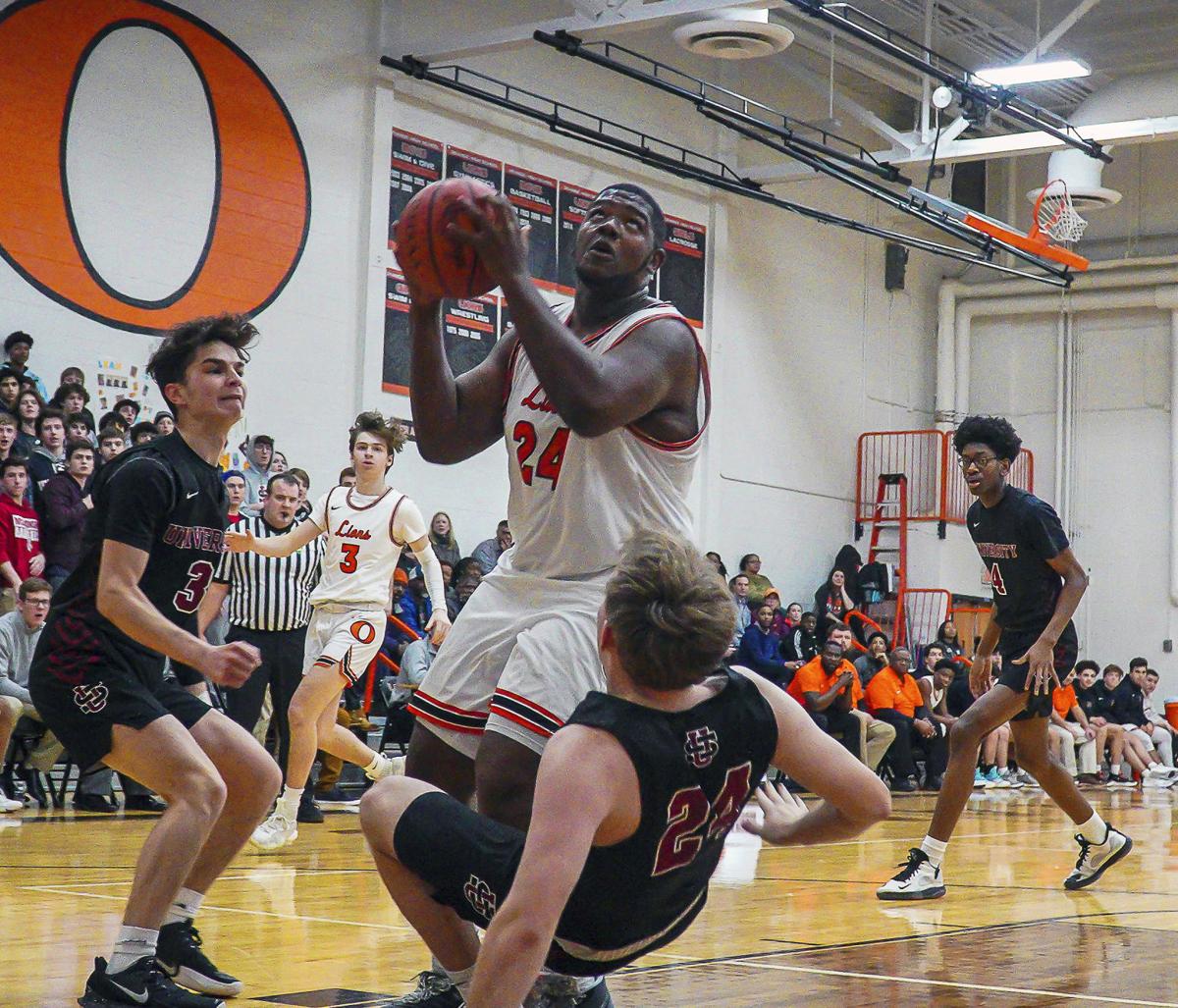 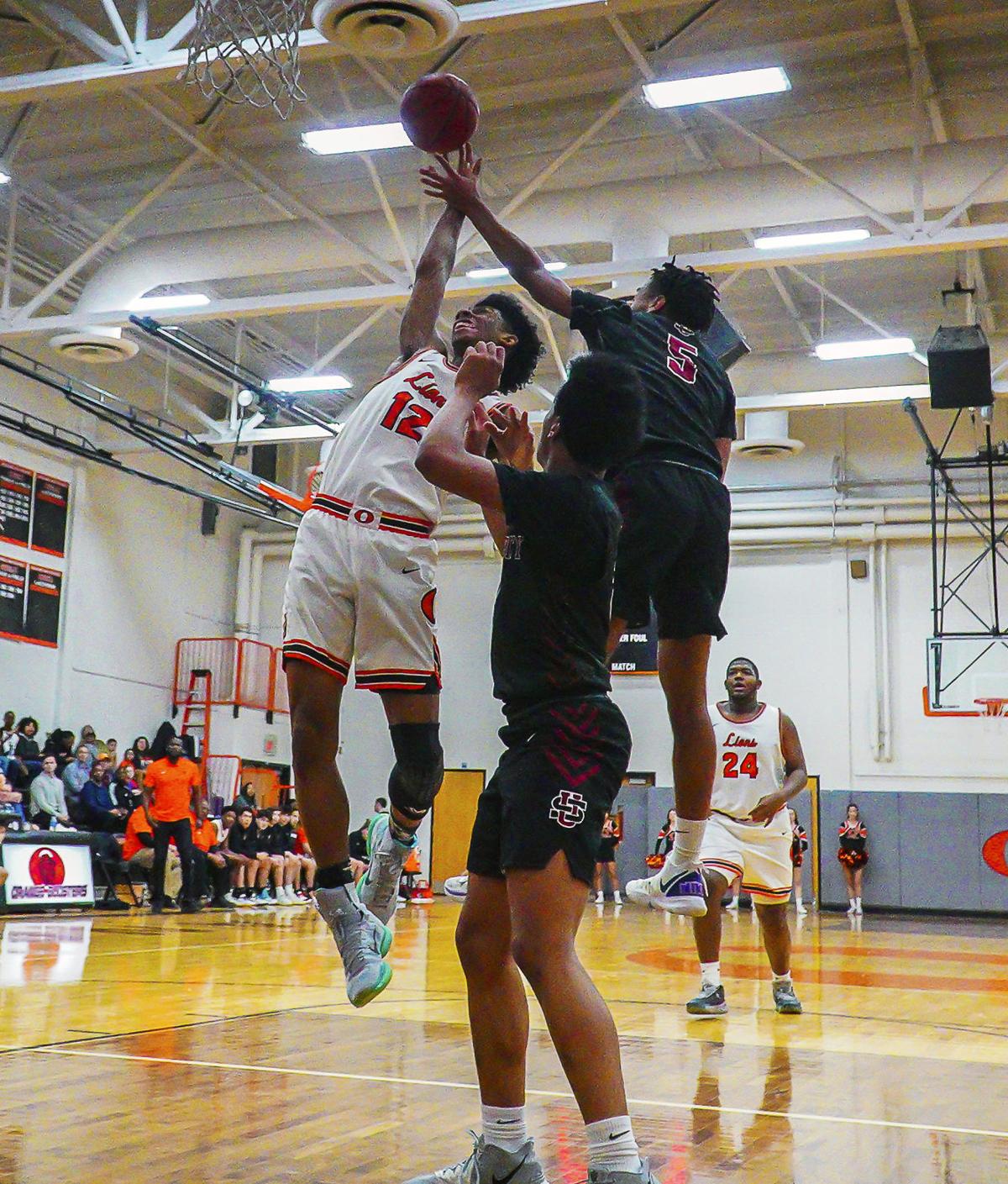 Orange 6-foot-5 senior Donald Hughes (No. 12) gets off a floater against University School 6-foot-2 junior Asaan Snipes-Rea (No. 5) during the Lion cagers’ home victory, 65-64, on Friday night in Pepper Pike.

Orange 6-foot-5 senior Donald Hughes (No. 12) gets off a floater against University School 6-foot-2 junior Asaan Snipes-Rea (No. 5) during the Lion cagers’ home victory, 65-64, on Friday night in Pepper Pike.

Surrendering a 12-2 run in the first quarter, the Orange boys basketball team’s perfect mark at home was tested in a non-league clash against University School (13-6) on Friday night in Pepper Pike.

Orange 6-foot senior Nicholas Walters tried to get his team going with back-to-back treys for a 6-5 lead, but the visiting Prepper cagers took control behind 6-foot-1 juniors Cam Smith and Josh Bickerstaff running the floor for a 24-13 lead at the quarter mark.

Walters’ first 3-pointer came when 5-foot-11 senior Scott Minor beat University’s press and fed him in the corner, and the latter came when Walters stole a long rebound, faked a pass to 5-foot-10 senior Jared Leikin and then pulled up at the arc to swish another one home.

But if the Lions (10-7) wanted to protect their home floor and improve to a perfect 8-0 in front of their home fans, they’d need more than just a 28-point season high from Walters to pull off a 65-64 victory.

“I think Nick Walters hitting a few threes kind of opened things up for us, because nothing was falling other than him,” Orange third-year head coach Ashen Ward said. “So, he really carried us through that first quarter, and then he got in a little bit of foul trouble. And then, like I said, we have weapons.

“So, Donald (Hughes) knew it was his turn to step up, and I thought Myles King gave us a great spark off the bench. And we were just able to claw defensively to get some fast-break layups when we needed them and find open guys to make shots.”

After falling below .500 with back-to-back road losses against West Geauga and Harvey in late January, the Orange boys were trying to close out a three-victory week at home and extend their win streak to four.

“I think Orange has the most support system in the CVC,” Walters said about the unbeaten mark at home. “The fans are always involved the whole game, and I feel like that makes us feed off of them. And we’re just more enthusiastic about the game. We’re just more excited.”

In addition to Walters’ 22 points against Chagrin Falls, 6-foot-5 senior Donald Hughes scored 21 points, as the Lions outscored their league rivals, 24-11, in the fourth quarter to run away with a 21-point victory.

Orange has had five players in double-digit scoring this season, but that was the first game two players eclipsed the 20-point mark in the same game.

With five different Lions having led the scoring column this season, coach Ward applauded his team for recognizing Walters’ hot touch and finding ways to get him the ball in three straight home games last week.

“That’s the growth from where we were at in the beginning of the season,” Ward said. “Guys just recognize, ‘Man, we’ve got a lot of weapons.’ And our guys recognize that when one of our weapons is feeling it, we’ve got to use him, and it’s just going to make it easier for everyone else on the team.”

After trailing by 11 points at the quarter mark against University, Orange stormed back on a 20-4 run in the second quarter to take command of a 36-35 lead at intermission.

That run was highlighted by Walters’ side-step triple against the perimeter defense of University 5-foot-11 junior Sean Scadlock, Orange sophomore Trevor Moss’ bullet pass across the top of the arc for another 3-pointer by Walters, and then Walters’ steal at half court for a breakaway layup and a 33-28 Lion lead.

“It was just great ball movement,” Walters said of the 20-4 run. “Like, the ball movement just gets everybody open to certain spots, and it appears I was just the one getting open while the ball was moving. And we were also in the huddle saying, like, ‘We’re home. We can’t disappoint.’ So, we decided to pick it up.”

University opened the third quarter on a 10-5 run with 6-foot-6 junior standout Ricky Radtke working his assist game from the top of the paint, feeding junior sharpshooter Faris Dahman for a 3-pointer and then Smith for a 3-pointer. Smith led the Preppers with 22 points.

But with a matchup against Orange’s Hughes, Radtke was limited to 12 points. The Lions also restored order with the blocking efforts of Leikin and King, a 6-foot-2 spark off the bench, to reclaim a lead, 54-51, at the end of the third quarter.

“Jared Leikin, he’s the heart of our team,” Ward said. “People will look at the stats and say, well, this kid didn’t score, but he played 25 minutes. And that’s because he does all the things our team needs him to do, whether it’s rebounding, whether it’s taking charges, blocking shots, getting steals, communicating on both ends of the floor – he’s our leader. Every guy in our locker room trusts him to make the right plays and do whatever it takes for us to win.”

Orange 5-foot-11 senior Harrison Pyner also drained a corner trey on a post dish from Hughes to stop the bleeding midway through the third quarter.

In addition to Leikin’s two rejections and King’s one, junior Tyler Hoffman also got involved in the block party for the Lions.

“The main point was just walling up and make (Radtke) make tough shots,” Ward said of the Lions’ interior presence. “I thought Myles King did a great job defensively for us too around the basket, just being a force down there and making sure that guys knew when coming to the hoop, they’re going to be met by one or two guys. So, just giving up nothing easy, and that was a team effort.”

University’s Smith got going on some fast breaks in the fourth quarter, while Dahman and 6-foot-2 junior Asaan Snipes-Rea connected from deep, but Orange always seemed to have an answer down the stretch.

The Lions never led by more than four points in the fourth quarter, but they never surrendered their lead either. They held on for the 65-64 victory to remain unbeaten at home.

“It’s great having a lot of weapons, because it makes the defense, you know, they can’t focus on one person,” Walters said. “They have to focus on the whole five. So, these past three wins gave us just more hope and saying that we’re a good team. It builds so much confidence to know that we’ve got this – we can shoot, we can drive, we can play defense.

“We just have to keep executing and play as a team; be a family.”