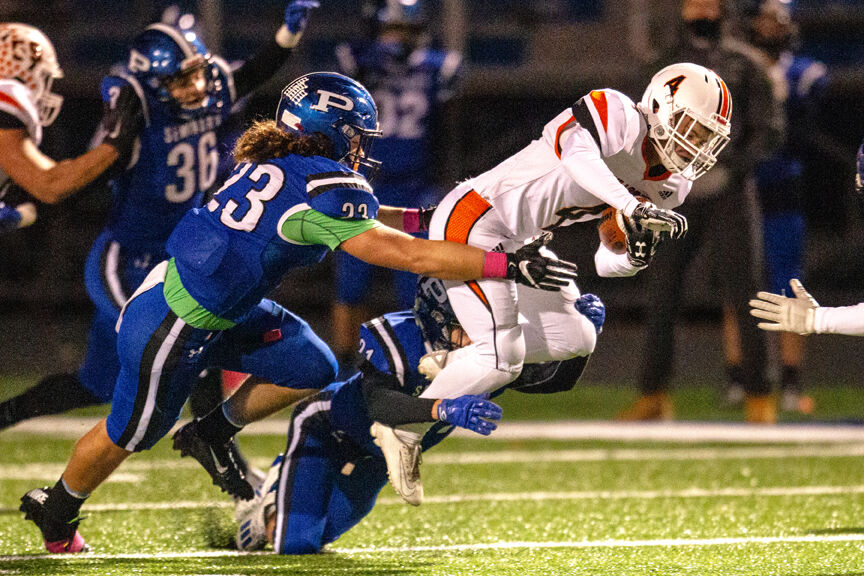 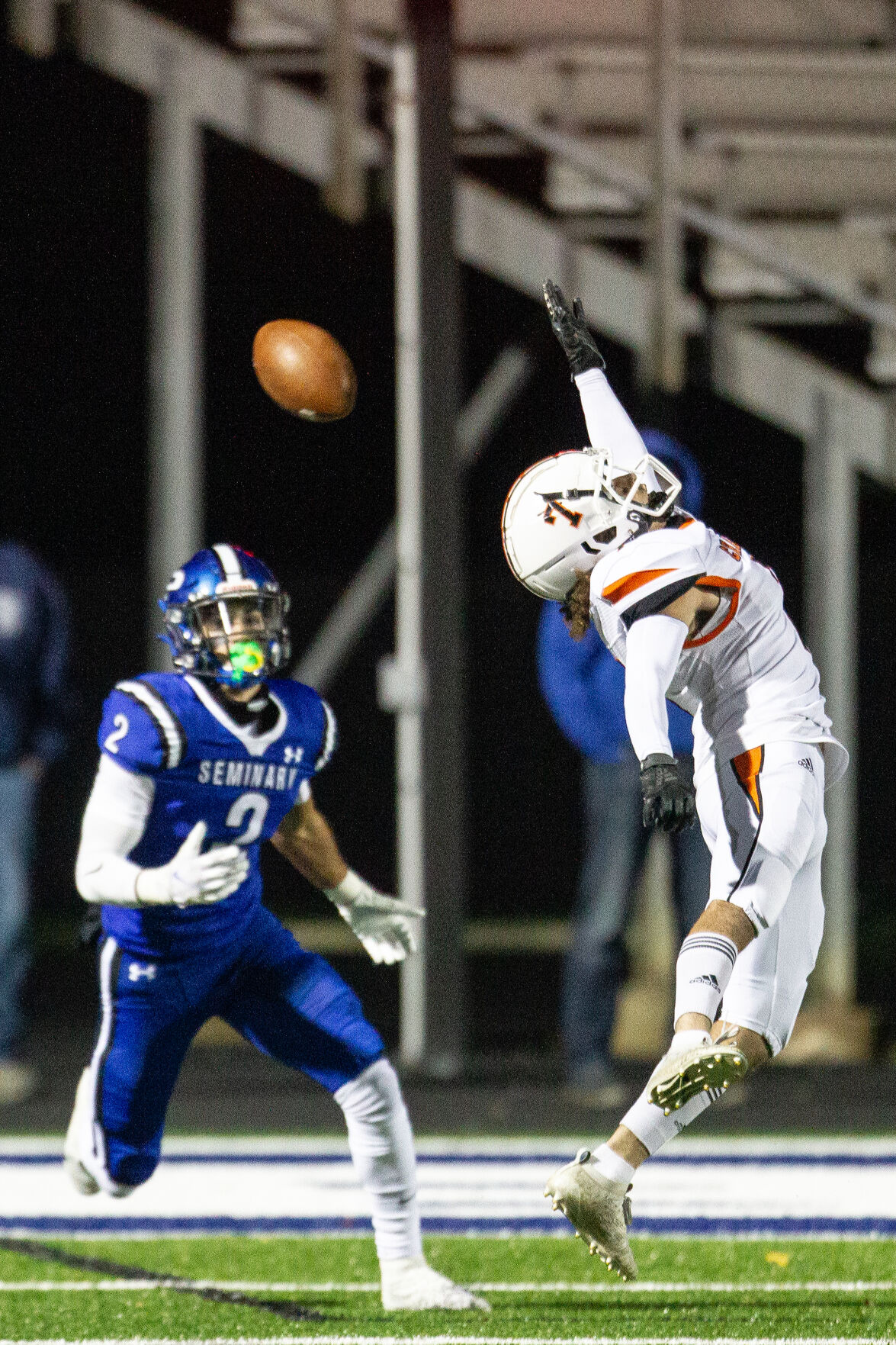 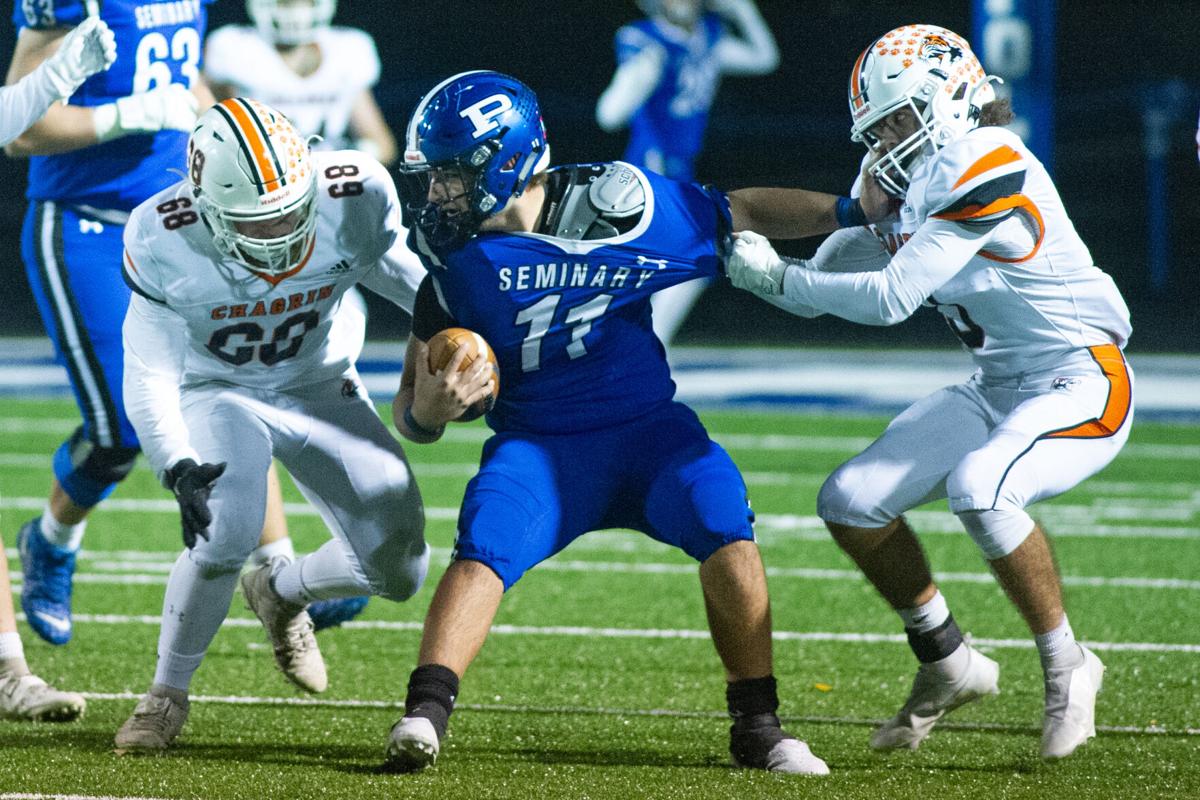 A 7-0 halftime deficit, Chagrin Falls was hanging with one of the toughest Division IV teams in the state during a Region 13 quarterfinal battle against Poland Seminary (7-1) on Saturday night at Pavlansky Field in Mahoning County.

The region No. 2-seed Bulldogs’ lone score before the break came on a 16-yard keeper by 6-foot-1 junior quarterback Jack Fulton with 32 seconds remaining in the opening frame.

Other than that, the No. 10-seed Chagrin gridders (5-3), coming off a forfeit victory from the previous week, relied on their defense to stand up a Poland team that came in averaging 33 points per game behind a behemoth of an offensive line.

“It was a good, hard-fought first half,” Chagrin Falls 26th-year head coach Mark Iammarino said. “I thought we did a good job defensively and didn’t capitalize on some opportunities offensively in the first half.

“And then really we just wore down in the second half. Their offensive line was huge. I mean, I think their smallest guy was like 270 (pounds), and they just kept on leaning on us. And our kids, you know, they gave a valiant effort, but it just was a matter of time.”

Poland went on to score two unanswered touchdowns in the third quarter en route to a 34-9 victory. The Bulldogs outrushed Chagrin, 354 yards to 185 yards.

After Poland went up, 7-0, at the quarter mark, Chagrin Fall put together a drive that had 140-pound senior running back Cam O’Connor finding the edge for an 18-yard gain down to the Bulldog 30. But the chains stalled, and junior kicker Andrew Kirkpatrick attempted a 45-yard field goal from the left hash that had plenty of leg behind it – it sailed wide right with 9:34 to go in the half.

“Not bad,” Iammarino said about his offense establishing the run at times. “I wouldn’t say great, basically because we scored nine points with just one touchdown. We would obviously have to move the ball much more and convert situations, but we had to punt, and we turned it over a couple times – a couple fumbles that stopped drives. So, that’s tough.”

The first turnover of the game, however, was a fumble by Poland, when Fulton was stopped short of the goal line on a third-down quarterback sneak and coughed up the pigskin into the end zone, where Chagrin Falls junior defensive back Cole Ettinger was in position to recover it with 5:20 to go in the half.

Chagrin’s defense also turned the Bulldogs away on third-and-three on a 26-yard field with just over a minute to go in the half, thanks to quarterback pressure by 215-pound junior defensive end Max Moore and a sack by senior defensive back Will Tropp.

If the Tigers’ defense could keep it up, a 7-0 halftime deficit wasn’t so bad. But, like Iammarino said, the Bulldogs continued to lean on Chagrin Falls with their offensive line.

“Their offensive line was the biggest line we’ve faced in a long, long time,” Iammarino said. “They were good. They were really good.”

On its opening series of the third quarter, Poland put together a 12-play, 78-yard drive that concluded with a 5-yard touchdown toss from Fulton to junior Christian Colosimo for a 14-0 lead with 6:38 remaining in the frame.

On Chagrin’s ensuing possession, the Tigers coughed up the pigskin on a first-down completion, and Poland took over on a 41-yard field with 6:22 remaining in the frame.

The Bulldogs set up a first-and-goal from the 2-yard line and handed off the leather to 195-pound senior fullback Peyton Mrakovich, who fumbled the ball short of the goal line with Chagrin Falls 205-pound senior linebacker Owen McClintock recovering it. Ettinger made the initial hit to knock it loose.

But the officials had an extended powwow after the play and ruled that Mrakovich was down before the fumble – video replay showed otherwise.

Instead of a turnover, Poland capitalized on a 1-yard touchdown run by 170-pound sophomore Bryce Barringer for a 21-0 upper hand with 3:45 left in the stanza.

“We were down, 7-0, and then it quickly became 21-0,” Iammarino said. “At that point in time, you’re kind of out of your game plan, because you’ve got to score quick. But the kids responded to whatever we asked them to. I thought Dawson (Pierce) threw the ball pretty well. He hit Will Tropp and Josh Norton for a couple passes, and Cam O’Connor scored on a touchdown run too. So, there were some good things in there as well.”

Chagrin Falls 6-foot-3 senior quarterback Dawson Pierce, who finished nine-of-15 passing for 107 yards, completed a 17-yard toss to Tropp and a 21-yard toss to senior running back Xavier Perez on the ensuing drive that had the Tigers set up at second-and-one from the Bulldog 9. Then Chagrin coughed up another fumble with 11:05 to play.

But the Tigers’ defense forced a three-and-out, and Poland’s long snap was high and through the hands of 6-foot senior punter Brenden Gurd, who intentionally kicked it out of the back of the end zone for a safety. The Tigers were on the board, 21-2, with 9:44 to play.

Chagrin Falls couldn’t make use of a short field, with a turnover on downs at midfield, and Poland flipped the gridiron for a 3-yard touchdown run by Barringer for a 27-2 Bulldog lead with 6:46 remaining.

Perez returned the ensuing kickoff to the 47-yard line, and the Tigers finally found the end zone on a drive that featured an 18-yard reception by 6-foot-2 senior Josh North and an 18-yard touchdown run by O’Connor to cut the deficit, 27-9, with 5:20 remaining.

An ensuing onside-kick attempt was unsuccessful, and Poland senior Jacob Caudle put the nails in the coffin with a 26-yard touchdown run for the eventual 34-9 final.

“It’s been since 2013,” coach Iammarino said about the last time his Tigers played in a regional quarterfinal.

“This is a very important thing for us,” he said. “It’s a great honor, but it’s also something we wanted to try to take advantage of. And, like I said, I think everything in our ability – our kids gave great effort in their preparation and in their performance, but it truly was a big deal.”

With the win, Poland Seminary advances to host region No. 6-seed Youngstown Ursuline (6-2) in the semifinals at 7 p.m. Saturday.