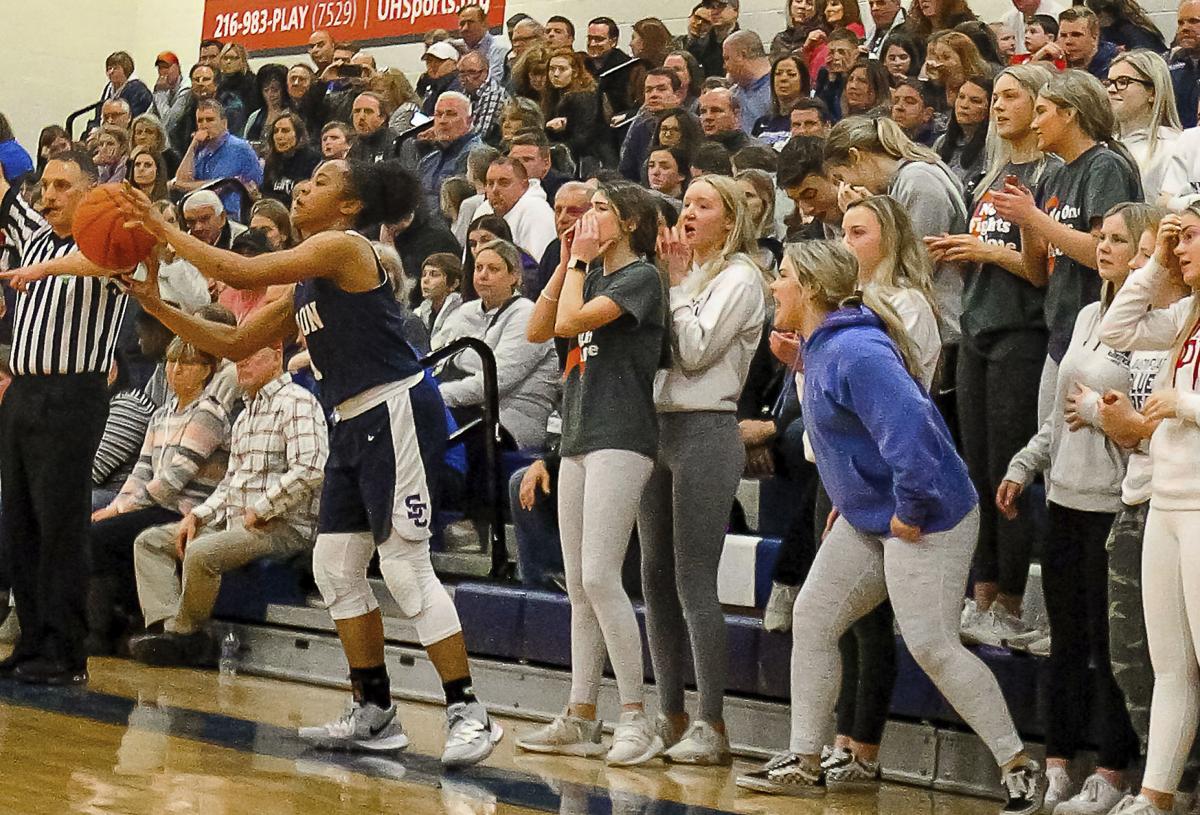 Solon senior Nadia Gibson inbounds a possession with the harassment of the Magnificat student section behind her during the Lady Comets’ 60-44 loss in their ninth straight district title game appearance on Friday night at Valley Forge in Parma Heights. 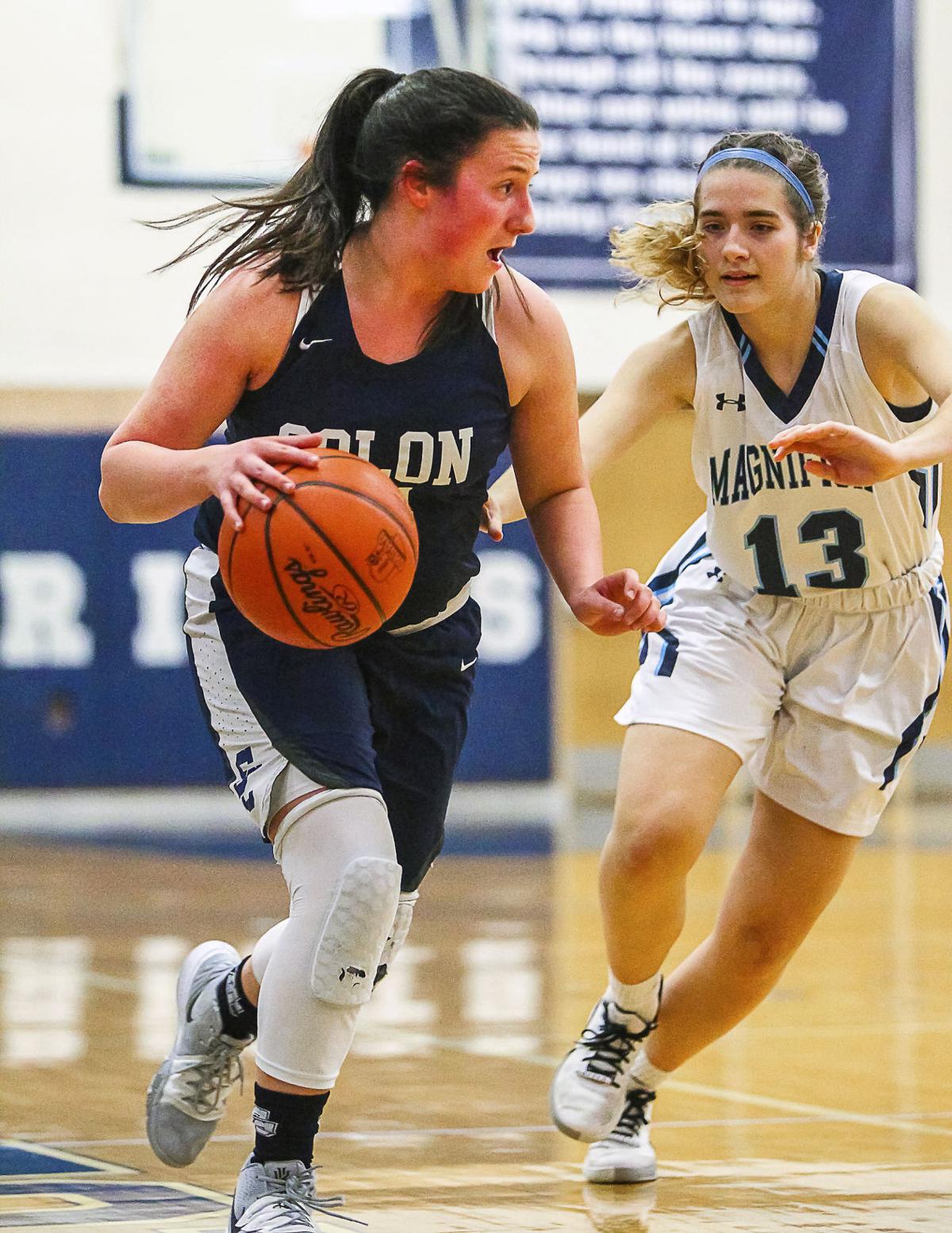 Solon senior Julia Gersey brings the ball up the floor against the defense of Magnificat senior Isabel Comer during the Division I district title game on Friday in Parma Heights. 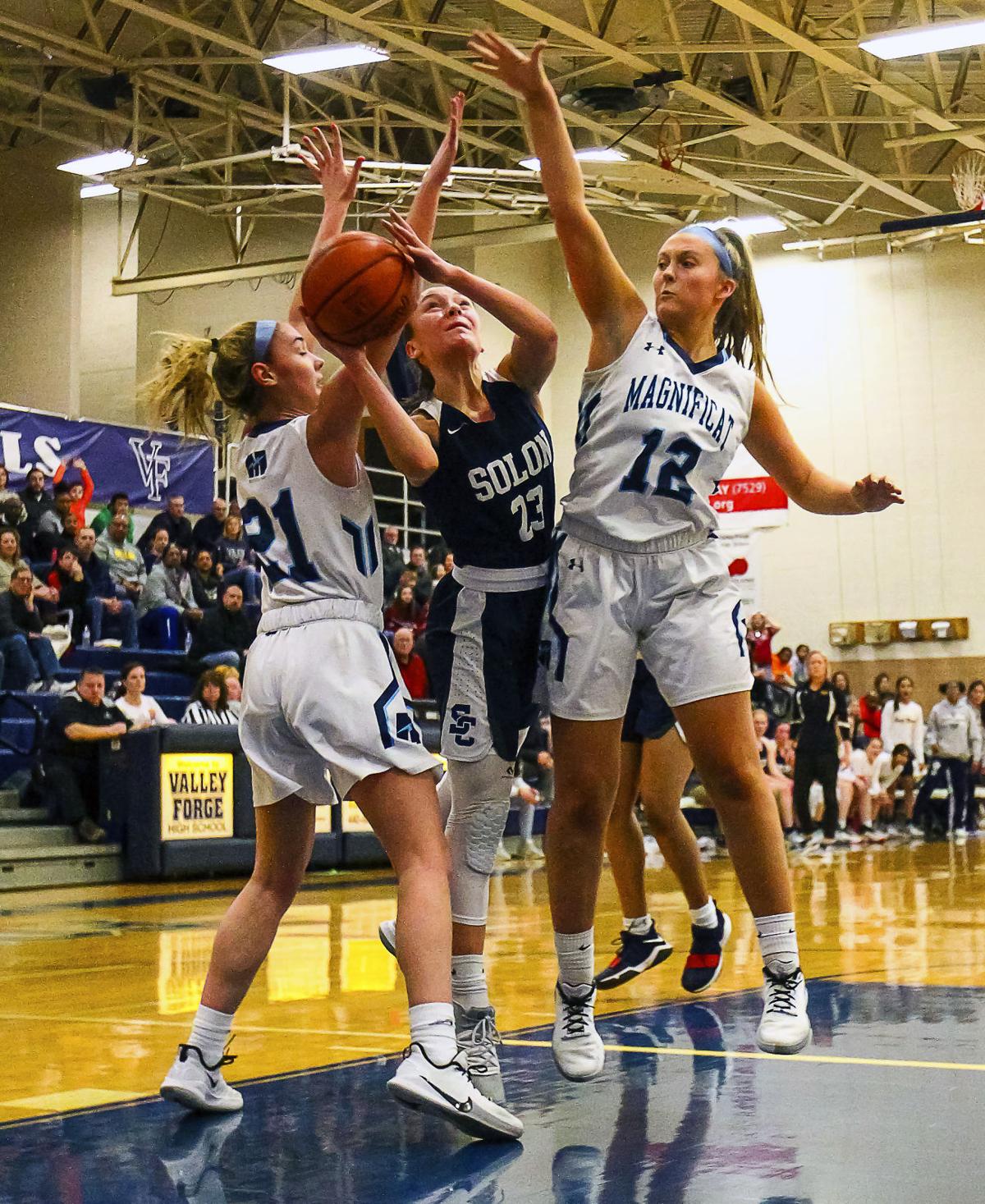 Solon senior Nadia Gibson inbounds a possession with the harassment of the Magnificat student section behind her during the Lady Comets’ 60-44 loss in their ninth straight district title game appearance on Friday night at Valley Forge in Parma Heights.

Solon senior Julia Gersey brings the ball up the floor against the defense of Magnificat senior Isabel Comer during the Division I district title game on Friday in Parma Heights.

The longest active streak of consecutive district titles among Division I girls basketball programs in Ohio is over.

After graduating four starters last year and five starters the year before that, few expected the Solon girls to even reach the district championship game this season.

But there the No. 3-seed Lady Comets (15-10) were, taking on top-seed Magnificat (19-6), of Rocky River, with a title on the line Friday night at Valley Forge High School in Parma Heights.

The next-longest streak of district titles entering this season belonged to state No. 2-ranked Newark (26-2), which cut down the nets with its sixth straight trophy on Saturday.

“I love our kids’ fight,” said Kruse, whose Lady Comets overcame a double-digit deficit in the second half of their district semifinal game, behind seven 3-pointers in the third quarter, to upset No. 2-seed Medina (17-7), 52-51, three days earlier.

Although Magnificat overpowered Solon on Friday, the Lady Comets weren’t going up against the kind of talent they haven’t seen this campaign.

Among the nine opponents Solon lost to in the regular season, four advanced to regional play, including Division I Mercy McAuley, Stow-Munroe Falls and Canton GlenOak, as well as Division III perennial power Columbus Africentric.

“We have a tough schedule,” Kruse said. “I don’t know if we were tired from Tuesday night. I don’t know what it was. But Mags deserved it. They played better than us.”

The Lady Comets came out of the gates with the offensive fire it was going to take for a potential upset and owned a 15-13 lead six minutes into the game.

Solon 6-foot junior Hailey Weaver crashed the board for a put-back bucket, senior guard Nadia Gibson hit a running floater and then dropped another bucket off a steal in transition, and then 5-foot-10 freshman Morgan Blackford caught fire with three straight triples.

After knocking 10 shots from downtown in the semifinal game against Medina, the Solon girls were going to need to continue their season-long success from beyond the arc. But that didn’t happen.

“Oh, absolutely,” Kruse said about her cagers recording one of their coldest shooting performances of the season. “I thought we forced a lot of threes, especially in the first half, to where we weren’t really passing the ball or attacking and kicking it out. So, there were a lot of forced threes, and that’s not how we shoot the three-ball.”

That 15-13 lead was the last upper hand Solon would have, as Magnificat went on an 18-2 run for a double-digit command with 3:35 to play in the half.

Solon’s defense kicked into gear to hold the Lady Blue Streaks without a bucket for the remainder of the second quarter to cut the deficit, 31-22 at intermission.

The Lady Comets then pulled within striking distance, 34-28, to open the third quarter, with 5-foot-11 senior Maria Leskovec’s 3-pointer, a touchdown pass from senior guard Julia Gersey to Weaver that led to a split pair at the line and then another defensive board by Gersey that led to a Weaver layup in transition.

“Yeah, I thought we did (have them in check),” Kruse said of the defensive effort. “We came out in the start of the third quarter and made a nice little run. But then it kind of just got away from us, and we just gave up too many easy layups.”

The off-ball movement and extra passes by Magnificat got the Lady Blue Streaks going again for a 45-32 upper hand after three quarters. Magnificat then opened its largest lead of the game in the fourth, 58-37, before cruising to the 16-point victory.

Both teams had 20 turnovers, but the Lady Blue Streaks shot 24-of-55 from the field, or 43.6 percent, with 16 assists. Not to mention, they had 16 points off the bench, compared to Solon’s three.

“Not our best,” Kruse said of her team’s overall defensive effort. “That’s just it. It’s not our best.”

Solon’s Weaver, who announced her commitment to Northwestern University on Sunday, finished with an all-around effort of 12 points, 11 boards, two assists, five steals and two blocks; while Blackford had a team-high 13 points with six boards, an assist and two steals; and Gibson had 10 points with a board, two assists and two steals.

Joining Gibson in their final high school game, Leskovec had four points with three boards, and Gersey had two points with six boards.

“(Gibson) and (Leskovec) have been in the program for four years,” Kruse said. “Gersey came back this year after not playing last year. I think that takes a lot of courage as a kid just to come back and continue to fight. And she worked her tail off this year. So, to get to where she did, I don’t know what type of season we would have had.”

The potential of the program to grow and make another playoff run next season is favorable, Kruse said.

Not only will next year’s Lady Comets have the leadership of a four-year varsity veteran in Weaver, as well as current 5-foot-10 junior Micaha Marbury, who was a top reserve this season, but this year’s freshman class is one of the strongest Kruse has had.

In addition to Blackford, Chyanne Hatcher-Turbeville was a top starter before injury, while Kennedy Ford and Raquel Thompson played some key minutes off the bench.

“We have a really strong group coming back, and we’ve got a strong eighth-grade class coming in,” Kruse said. “We just have to continue getting better, because Mags is, and we’re in the same district. So, we’ve got to get better.”